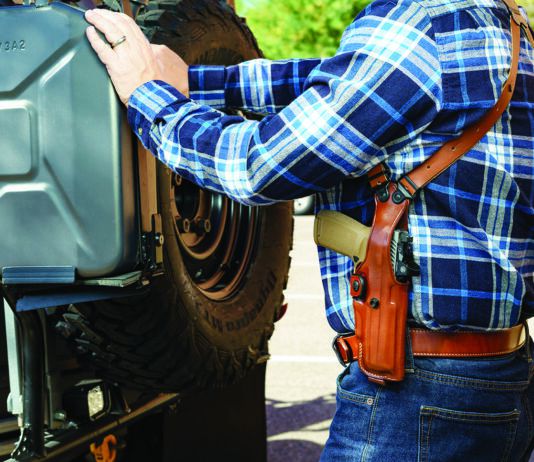 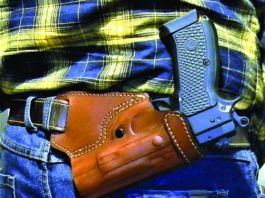 Small-of-Back Holsters: We Test a Handful of SOB Types 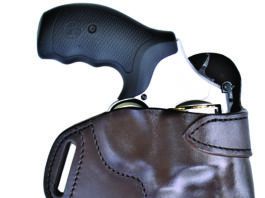 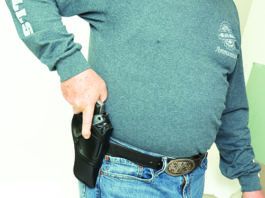 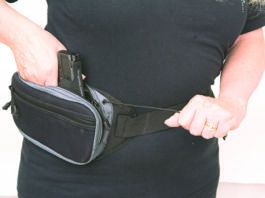 Multi-Use Holsters: Can One Leather Choice Do Two Jobs?

Here at Gun Tests we do not often address intangibles. We measure performance in a logical manner. We test firearms, devices, and ammunition in a repeatable and verifiable manner. We do so in order to produce a level playing field for products. This is a credible standard for comparison. Just the same, sometimes a concept is worth a hard look. This month we are addressing the concept and execution of holsters that are designed to fill more than one mission. We have explored the concept and found that, at least in the case of some of the holsters tested, the concept is viable.

We wondered, is it possible to have a holster that fulfills several different jobs. Or would we find the truth of the adage, "jack of all trades—and master of none," and learn that a certain holster style is suited only to a single style of deployment? There have been numerous multi-function holsters advertised to fill more than one mission. We chose to cover six holsters that have been advertised as multiple-role holsters. These range from more-or-less standard holsters with extra belt loops to a holster with multi-directional belt loops.

But inquisitive GT readers (you know who you are) will challenge: Why compromise at all? Why not simply choose a single holster for each mission? Realistically, who wants to have to swap rigs to move from car to office to restaurant, especially for those of us living in a true four-season climate? If one holster can work inside the waistband (IWB) for concealment, as a strong-side belt scabbard offering real speed and comfort, and as a cross-draw holster for those who are seated or driving most of the day, that would indeed be a valuable piece of kit. Also, with quality custom leather and Kydex holsters approaching $100 dollars or more, it is important that we make a good choice.

To start, we examined these units with an eye toward assessing the use of good materials, professional surface finish, and tight, durable stitching. How well the holsters function in the field is another matter, so we tested these holsters on the body extensively. Several team members wore a rig for at least a week each, then traded off holsters to various raters. We also drew handguns from them and shot targets at a range.

In particular, we focused on cant and rake during our field and shooting assessments. Cant is the angle of the holster away from the body. Rake is the angle of the muzzle. If the muzzle is pointed to the rear or spine of the holster, it's is a "rear rake" design. Almost all holsters are a rear rake design. A very few are a neutral cant, useful for the most part with compact handguns. The forward rake holster is most often seen as a competition holster for very tall shooters. A forward rake would expose the butt to printing on the garments and would be unsuitable in a concealed-carry holster.

At the end of the field and range work, we compiled the tester's pro-and-con comments during a roundtable discussion. To avoid a lackluster "jack of all trades, master of none" nomination, the holsters had to receive an A grade in one of their design missions and at least a B grade in the second. In other words, a strong-side holster that could be carried as an IWB needed an A grade as a strong side and a B grade as an IWB to pass. 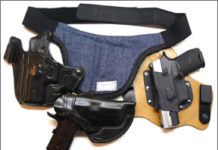 Holsters estaff - July 14, 2009
It seems every other week some manufacturer introduces a new pistol offering the latest in technology and sexy new styling, all in an easily-concealable package. Gun enthusiasts like us are drawn to these guns, but reality usually smacks us in the face as we drive home with our newest addition to our firearm family. "How am I gonna carry this thing?" we ask. Unfortunately, our lack of planning usually results in a pile of holsters in a corner, as we attempt to find one that fits correctly.This month well take a look at four inside-the-waistband holsters that offer a variety of wearing options. Two of the holsters, the Kramer #3 Inside The Waistband Horsehide ($132) and the TT GunLeather Slim IWB Holster ($85) are molded from leather to fit a specific firearm. The Crossbreed SuperTuck Deluxe ($65) uses a unique combination of dye-cut leather and molded Kydex, and the Smart Carry Standard Model ($48) has a patented design incorporating denim and a waterproof membrane sewn together in an apron-type arrangement. 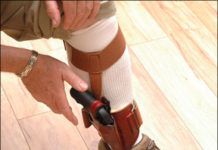 Holsters estaff - June 12, 2009
If youve never carried a handgun in an ankle holster, consider this. If such carry is rare or unpopular, then it will likely prove unexpected as well, increasing the element of surprise- which is always a good thing when it comes to self defense. In this test we will look at three small revolvers that are suitable for ankle carry as well as other methods of deeper concealment. The revolver is a time-proven device, but making them small and light can present new challenges.The three revolvers are Smith & Wessons $600 Model 442 No. 162810, the $430 Charter Arms On Duty No 53810, and Rugers new $525 LCR, No. 5401. Each gun was chambered for 38 Special only, and thanks to the use of lightweight materials offered an unloaded weight of less than 1 pound. Maximum capacity was 5 rounds.To test our revolvers we fired from support at the nominal distance of 10 yards. One of the challenges of firing a short-barreled revolver from a rest is that once youve wrapped the snub-nosed revolver in your hands, there is not much gun left exposed for support. In addition, you have to be careful not to block off the cylinder gap. This is the area between the forward edge of the chamber and the entrance to the barrel, referred to as the forcing cone. As the bullet "crosses the break," gases are emitted that often carry unburned powder. In addition, if cylinder to bore alignment is not correct, debris can be sheared from the bullet as it enters the forcing cone. To prevent being splashed by debris we chose to use a flat, pillow-style bag, (sold as the Elbow Bag) from battenfeldtechnologies.com. These bags were tightly filled but lightweight, so shipping on top of the $20 price was nominal. Best of all, they were covered with an abrasion-resistant material.Our tests were performed outdoors at American Shooting Centers (amshootcenters.com) where the benches offered a vertical stop against which we could brace our support. Once seated, we rested our hands plus a radius of the trigger guard atop the bags. The Charter revolver was the only gun that could also be fired single action, so we tried that too. But the accuracy chart reflects the measurement of five-shot groups fired double-action only.Although ammunition was scarce, we were able to find what we needed at ASCs Pro Shop, (281-556-8086). For test ammunition we fired inexpensive 158-grain lead roundnosed ammunition from MagTech, remanufactured 125-grain jacketed hollowpoints from Black Hills Ammunition, and the latest high-velocity law-enforcement rounds from Speer. They were the +P 125-grain Gold Dot LE hollowpoints sold in 50-round boxes. Lets find out how they performed.
1234Page 4 of 4