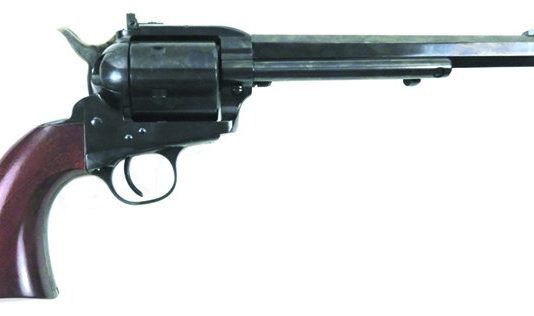 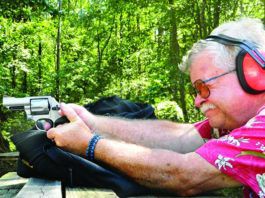 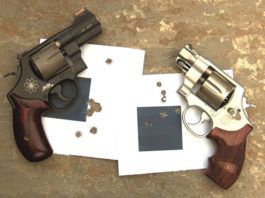 We Test Two Light Snubbies in 45 ACP; One Cracks Up, Fails 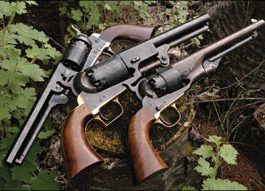 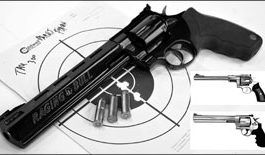 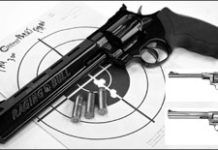 Revolvers44mag estaff - March 4, 2008
Our more recent evaluations of .44-caliber revolvers have focused on service models designed primarily for law enforcement or personal self defense. In this test we will compare three large-framed long-barreled .44 Magnum revolvers that are best suited for hunting or competing in events that mimic hunting, such as steel-silhouette shooting. We narrowed this category by limiting our selection to double-action revolvers. Furthermore, each of our guns featured the longest barrel length available from their respective manufacturers.Our three .44 Magnums were the $625 Taurus Raging Bull, Rugers $888 Super Redhawk, and the $964 Smith & Wesson Model 629 Classic. Both the Taurus and Smith & Wesson revolvers carried 8.4-inch barrels. The Ruger Super Redhawk was fit with a whopping 9.5-inch-long barrel. All three guns held six rounds. 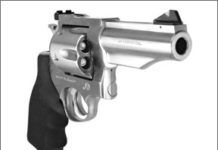 When new revolvers are introduced, they don't get the fanfare afforded the latest semi-auto. That's why you might have missed out on the latest crop of big-bore wheelguns.

In this test we will try to make up for it by pitting two steel-framed forty-fours against an ultra-lightweight revolver of the same caliber — Taurus's 444MULTI, $666 — that could make carrying a bigger gun more inviting. The stainless-steel guns are the $916 Smith & Wesson Model 629 No. 163603 and Ruger's $780 Redhawk KRH-444.

[IMGCAP(1)]If there is any comparison to be drawn between these revolvers and the world of semi-automatic pistols, it is perhaps the appeal of the big bullet. The small-bore high-capacity frenzy seems to have abated, and now it seems that every manufacturer is making a 45-caliber pistol. With the release of more .44s, revolver makers may also be saying when capacity is limited, why not chamber a larger caliber? But when that thinking includes .44 Magnum/.44 Special ammo, two important questions remain: Will the Magnum ammunition prove too punishing?, and will the .44 Specials be accurate enough?

To answer these questions we tested from a distance of 25 yards with two loads of .44 Remington Magnum and two loads of .44 S&W Special. They were 240-grain Federal Fusion .44 Magnum No. F44FS1, 240-grain American Eagle .44 Magnum jacketed hollow points No. AE44A, 200-grain Winchester .44 Special Silvertip HP No. X44STHPS2, and Winchester's 246-grain lead roundnose ammunition No. X44SP.

Before testing each gun, we lubricated it with BreakFree CLP. Lubrication points on the revolvers were the barrel and chamber bores, the ratchet lugs, and the bushing in front of the cylinder. We also pulled back the hammer and placed a few drops of oil inside the frame. Whenever we transitioned from the Special to the Magnum loads, we scrubbed inside each chamber. This is because the shorter Special rounds can deposit debris at the hotspot where the tip of each case empties into the chambers. A buildup of debris can reduce the volume of the chamber and increase pressure. In extreme conditions, such as when it becomes necessary to push the longer magnum rounds into place, the extra pressure can be dangerous.

To collect accuracy data, all shots from the bench were fired single action only from a distance of 25 yards. Repeat fire was tested using the double-action trigger at shorter distances. We didn't expect to be able to shoot the magnum ammunition quickly, but we wondered about the .44 Special loads. Was there enough stopping power from each round to justify a shorter recovery time between each shot? Let's see how our six shooters measured up. 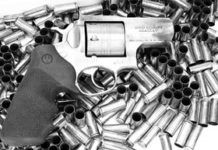 In this article we evaluate three guns that make no excuses for their girth. The Smith & Wesson Model 21-4 is a straightforward, large-frame revolver chambered for .44 Special only. Its .45 Colt brother, the Smith & Wesson Model 25-13, is slightly more modern, adding adjustable sights. The Ruger Super Redhawk Alaskan was fit with a longer cylinder, and together with its heavy frame, it is capable of firing .454 Casull as well as .45 Colt ammunition.

Our focus in this test was personal defense from humans and not bears, so we left the Casull rounds at home, but we did test an extra-heavy .45 Colt load from Atlanta Arms and Ammo formulated specifically for Ruger and Thompson Center firearms (

For our .44 Special rounds we chose 165-grain JHP rounds from Cor-Bon, Winchester's 200-grain Silvertip HP rounds, and 240-grain Truncated Cone Jacketed ammunition manufactured by Atlanta Arms and Ammo. Test distance was 25 yards from a sandbag rest. We fired single action only to collect hard data, but fired on steel targets double action only to evaluate rapid-fire capability. Limited to six-round capacity, we wanted to know which guns offered the right mix of power, accuracy, and speed. Here's what we learned: 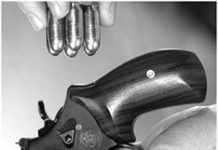 Super-Light Wheelguns for Self Defense: Too Much Power? 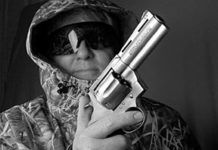 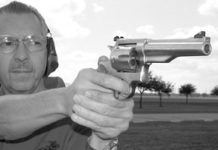 Though larger rounds have eclipsed some of the .44 Magnum's "Dirty Harry" magic, the cartridge remains near the top of the power curve, especially when day-to-day carry comes into play. The .454s and the .480s and the .475s are simply too much powder and metal to shoot on a daily basis, but .44 Magnum remains manageable, if still high-spirited.

Almost 50 years ago Elmer Keith lobbied manufacturers to produce a beefed-up version of the .44 Special, a round which he had handloaded in Smith & Wesson TripleLocks and Colt Single Actions, among others. His handloads, according to his book Sixguns, pushed 250-grain bullets to 1200 fps in long-barreled revolvers, including Model 1926s and Model 1950s.

It wasn't until S&W and Remington teamed up in 1954 that the .44 Magnum came to life (the ammunition was 1/8-inch longer than the .44 Special so it would not chamber in .44 Special sixguns). Remington agreed to factory-load the rounds if Smith built guns for the cartridge, and toward that end, S&W rechambered four 1950 Target .44 Specials for the new round. In those guns, the new .44 Special Magnum ran at 1500 fps and higher. 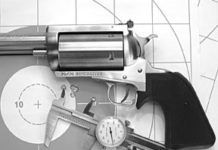 More Booming Revolvers: This Time, a .30-30 BFR Struts Its Stuff

We hate to admit it, but we've been had. All this time we thought that the revolvers from Magnum Research in the May issue were in fact the true BFRs — Biggest Finest Revolvers. These guns weighed in at 76 ounces and measured nearly 16 inches in length. But along comes two BFRs that are more than 2 inches longer and weigh almost a full pound more. Now we suppose that when it comes to the .45-70 and .450 Marlin guns reviewed last month, the "B" in BFR merely stands for bigger, not biggest.

But this month we step up to two rifle cartridges chambered in our test guns, the .30-30 Winchester and .444 Marlin. Besides being a well-known rifle cartridge, .30-30 ammunition is cheap and plentiful. If we numb our hands and wrists while shooting, at least we won't stun our wallets. In the .444 Marlin revolver, we wondered how gun, and shooter, would stand up to this big, straight-walled cartridge.

We got our guns from the Magnum Research Custom Shop, so there were variations in what we tested and what's available in factory production. The .444 Marlin BFR offered by Magnum research has a round, non-fluted cylinder. Our test .444 had fluting, but was otherwise a production model. The .30-30 Win. BFR (available from Magnum Research Custom Shop, Contract Mfg. Inc., 1594 College Rd., Baxter, MN 56425, telephone [218] 824-0080) is a custom chambering which costs $1,400. The Custom Shop has developed a number of custom calibers that are not available in production revolvers, such as the .218 Bee, .45/90 Win., .38-55 Win., and .375 Win. They are all $1,400. The guns are built to order with special caliber engraving on the frame. "Magnum's Custom Shop is newly created and seeks to fill a niche for shooters who want something other than the standard BFRs," said Jim Tertin of Contract Mfg. Inc. 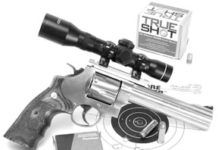 .44 Magnum Revolvers for the Field: S&W, Ruger, and Taurus

Smith & Wesson's 629 Classic DX has the edge over Ruger's New Model Super Blackhawk Hunter and Taurus's latest Raging Bull, but with the right ammo, each can be a winner. 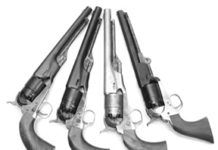 This black-powder revolver is affordable but well built, as are other 1851 and 1860 models. If you want something pricier, you should consider a Second-Gen. Colt, depending on your needs.

The versatility of the .44 Magnum cartridge is often overlooked. Yes, this is perhaps the finest hunting handgun cartridge ever devised, beaten only by recent hot loads in the .45 Long Colt and in handguns chambered for the .454 Casull, in production guns. The .44 Magnum is a hot cartridge, but that's only the beginning of the story. There are some lighter loads, not just in the .44 Special, that tame the gun considerably. These are the loads usually fired in the shorter-barreled versions, such as the four-inchers tested here.

The usual barrel length for the .44 Magnum is around the six-inch mark, because most shooters want to be able to get all the performance they can out of such a powe...

If you have never actually fired a revolver chambered for .44 Magnum, your reluctance is likely based upon their reputation for infamous levels of recoil. You may like the idea of shooting what Harry Callahan dubbed the world's most powerful handgun—which it was at one time—but muzzle energies of 900 foot-pounds or more that equate to power factors above 300 can be too much to deal with regularly.

[IMGCAP(1)] At Gun Tests we constantly seek ways to follow up on the service life of the guns we test. When possible, we track the very pistols and long guns that appear on these pages by keeping in touch with their owners, which in some cases are our testers but more often are readers who have bought actual test guns. Another way of tracking the reliability and satisfaction that a firearm can bring is to contact gunsmiths, retail outlets or the operators of public shooting ranges who add them to range rental-gun fleets.

We recently had occasion to test several revolvers previously reviewed and recommended in these pages with an eye toward gathering data about their longevity, a topic GT...