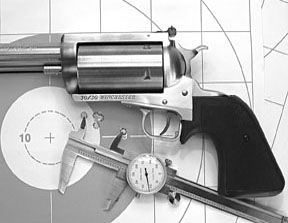 We hate to admit it, but we’ve been had. All this time we thought that the revolvers from Magnum Research in the May issue were in fact the true BFRs — Biggest Finest Revolvers. These guns weighed in at 76 ounces and measured nearly 16 inches in length. But along comes two BFRs that are more than 2 inches longer and weigh almost a full pound more. Now we suppose that when it comes to the .45-70 and .450 Marlin guns reviewed last month, the “B” in BFR merely stands for bigger, not biggest.

But this month we step up to two rifle cartridges chambered in our test guns, the .30-30 Winchester and .444 Marlin. Besides being a well-known rifle cartridge, .30-30 ammunition is cheap and plentiful. If we numb our hands and wrists while shooting, at least we won’t stun our wallets. In the .444 Marlin revolver, we wondered how gun, and shooter, would stand up to this big, straight-walled cartridge.

We got our guns from the Magnum Research Custom Shop, so there were variations in what we tested and what’s available in factory production. The .444 Marlin BFR offered by Magnum research has a round, non-fluted cylinder. Our test .444 had fluting, but was otherwise a production model. The .30-30 Win. BFR (available from Magnum Research Custom Shop, Contract Mfg. Inc., 1594 College Rd., Baxter, MN 56425, telephone [218] 824-0080) is a custom chambering which costs $1,400. The Custom Shop has developed a number of custom calibers that are not available in production revolvers, such as the .218 Bee, .45/90 Win., .38-55 Win., and .375 Win. They are all $1,400. The guns are built to order with special caliber engraving on the frame. “Magnum’s Custom Shop is newly created and seeks to fill a niche for shooters who want something other than the standard BFRs,” said Jim Tertin of Contract Mfg. Inc.

Here’s how these guns stacked up.

[PDFCAP(1)]
Buying ammunition for this gun was simple. Five stores and mail-order houses we tried offered one and only one cartridge, the Remington Express Rifle 240-grain soft point. This cartridge measures about 2.6 inches in length, and based on the readings from our Oehler chronograph, there is plenty of powder inside the case. Traveling at nearly 1900 fps out of the BFR, this cartridge produces a whopping 1899 foot-pounds of muzzle energy. Naturally, some of this power comes back toward the shooter. Even though our BFR weighed in at 5.5 pounds, we found recoil to be punishing despite the sizable two-piece rubber grip. With its round Colt Cowboy profile, some recoil is bled off by the natural tendency for this gun to flip upward. Thankfully, Magnum Research has done a good job of making sure there are no sharp edges on the frame that can cut the hand. However, due to the recoil we experienced, we learned about even smaller details like the crisp edges inside the trigger guard.

In terms of mechanical fit we found both BFR guns to be flawless. Lockup was sound and sure and stayed that way even under the pressure of powerful shots. We did experience a build up of debris inside the chambers that made inserting fresh rounds stubborn after a few shots. But we think this is one of the drawbacks inherent in this class of revolver.

We were impressed with both guns’ triggers, which broke consistently at the same weight each time. The trigger on the .444 broke at 4.2 pounds, and the .30-30 broke at 4.5 pounds – a nearly imperceptible difference at the range.

Cosmetically, telling the two guns apart was easy. The custom fluted cylinder on the factory-made .444 Marlin BFR is quite a contrast to the round cylinder on the custom-shop .30-30. We understand Magnum Research is considering adding cylinder fluting to the BFR line, and we would recommend the company make that change.

The cylinders on both guns are 3 inches long, seated inside a flat-topped frame. In both cases, the cylinder rod is held in place by a screw. Unlike many revolvers that anchor this point with spring releases or push buttons, this adds needed strength to this revolver. There is no loading notch. Open the loading gate, and the cylinder is free to turn, but the hammer cannot be pulled back. The BFRs use a transfer bar in the ignition system. Pull the hammer back and the bar, a flat piece of steel, rises to cover the end of the firing pin. Pressing the trigger lets the hammer fly forward and strike the transfer bar, which in turn hits the firing pin. If you want to return to the hammer-down position without firing, you first hold the hammer back with the thumb and press the trigger briefly to release the hammer. Once the hammer is free, removing the finger from the trigger will drop the transfer bar. As you let the hammer down with your thumb, you will see that the space cut away in the hammer face for the transfer bar is now empty and the firing pin can’t be struck by the hammer.

At the range we found the simple open sights to be more than adequate for 50-yard shots. The rear unit seems small and plain, but it is easily adjusted for both windage and elevation. The front sight blade is a quick-change (one-screw) assembly, and different blade heights will make the biggest difference in elevation point of impact. Because we could not find ammunition with heavier or lighter bullets, this was not necessary.

The holes this gun left in our test targets gave us new respect for this gun and caliber. This BFR didn’t seem to have any problem launching cannon ball after cannon ball into groups consistently measuring between 2.5 and 2.9 inches. Heat didn’t seem to bother its operation. In this case, accuracy was primarily a product of a consistent grip. With a good scope, this would make a fine 100-yard hunting handgun. But your strength and endurance had better be ahead of your shooting skill. This gun will pound you.

[PDFCAP(3)]
This product is offered by the Magnum Research Custom Shop. Jim Skildum, president and CEO of Minneapolis-based Magnum Research, said he hasn’t decided whether to make the .30-30 part of the company’s regular production.

One way to differentiate between the guns is to look at the muzzles. The barrel wall on the .30-30 is approximately 0.07 inch thicker. The bore looks almost tiny compared to the muzzle of the .444 Marlin BFR. The result is that the .30-30 Winchester model is more muzzle heavy. Even though the difference in weight between the two guns is small, we could tell which one we were handling with our eyes closed. We thought the extra weight up front contributed to controlling this weapon. Whereas we thought this gun would be a handful, only the hottest loads came close to making the gun hard to handle.

Spectators also enjoyed our session with the .30-30, partly because the BFR produced some impressive flashes from the muzzle. We also got to hear more than a few concealed-carry jokes that were prompted by the size of our BFRs. Perhaps BFR actually stands for (Paul) Bunyan’s Favorite Revolver.

Accuracy from this model was also tops among the BFRs we have recently tested. While the .45-70 tested in May managed an average group size of 1.9 inches at 50 yards, this aggregate was shot with only one selection of our test rounds. But in .30-30 Winchester, we had far more success. Each of our .30-30 test rounds was capable of sub 2-inch groups. It is reasonable to believe that with the variety of .30-30 ammunition currently on the market, not to mention the wealth of hand-loading data, accuracy could be improved. The smallest single groups were fired with the Remington. Two separate groups measured approximately 1.6 inches. The most powerful rounds we fired from the .30-30 produced 1015 foot-pounds. of muzzle energy. This was the Federal 125-grain hollowpoint that landed a 1.8-inch group. We managed an average group measuring 2.3 inches per five shots at 50 yards with this round. We’re sure there are more powerful .30-30 loads available, but this should be enough for medium size game. Of all the BFRs, we like the .30-30 model the best because you can largely shoot it without complaint.

Gun Tests Recommends
Magnum Research BFR .444 Marlin, $999. Conditional Buy. This is a real boomer with good field accuracy. But guns with this much power, and chambered for expensive ammunition will likely make the buyer think twice.

Magnum Research BFR .30-30 Winchester, $1,400. Our Pick. Of the five BFRs we’ve tested in the last two months, this custom product would be our choice.