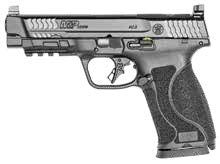 To assess their viability for use in the hunting fields, we mounted optics on all three pistols. The Super Redhawk wore a Burris Extended Eye Relief scope in a fixed 2.75-power magnification. The Colt Anaconda also held an official Burris Pistol Scope (2-7×20, No. 200291, $419), which we kept set at 2.75x to make it fair to the other Burris. Our Smith & Wesson M629 Performance Center Hunter includes the UTG SCP-RD40RGW-A, which is a 1×30 red- or green-dot optic that mounted directly to the Picatinny rail on the barrel of the S&W.

Loads tested used bullets from MidwayUSA.com, including the 240-grain hard-cast Keith-style semi-wadcutter from Hunter’s Supply (267313, $53/250), along with the 240-grain Speer Gold Dot jacketed soft point (166262, $25/100). Wanting to include something for the hunters who really need penetration, we also experimented with some Cast Performance Bullet Company 320-grain hard-cast wide-nose gas checks (141652, $45/100). Loads were assembled using a mix of brass, Winchester large pistol primers, VihtaVuori N110 or Alliant 2400 powder, and recipes from the Lyman 50th Edition Reloading Handbook. Our test results showed the VihtaVuori N110 to be a good bit more accurate for the combinations we tried. Here are the results and our opinions of the handguns:

When we compare the S&W Model 629 Hunter to an older Model 29 we have in house, it appears that Smith & Wesson mostly used the same frame as on the older version. Our old M29 is a square-butt version, and the new model is a round butt. That means the heel of the modern grip does not project as far to the rear, so the installed Hogue grips can maintain the same profile while they cover part of the backstrap. That translates to more cushion for your hand. The new version added in the keyed lock located immediately above the cylinder release on the left side of the frame. We understand politics and its inclusion, but we tend to ignore that lock. For those who like to use them, go for it.

We see the bloodline in the two revolvers, but we also see a ton of differences, courtesy primarily of the Performance Center. It doesn’t matter if you want a revolver or a semi-auto, these folks know how to build a great handgun. And they know how to make them look good. The Model 629 Hunter has some serious curb appeal. The grips, frame, and most of the barrel is flat black. The hammer, trigger, cylinder, cylinder release, and muzzle brake are stainless. The flats on the barrel are brushed stainless with black lettering. The chamber mouths have been chamfered, substantially enlarging and smoothing the openings. The front edge of the cylinder has been beveled, telling us this revolver is expected to go in and out of a holster a lot.

The full-length ejector rod almost glides in its rearward travel. Timing, once again, is excellent, with the cylinder locking up solidly before each shot. As with the Ruger, there is an additional locking point on the crane where it mates with the frame. The trigger is wide and flat, with an overtravel screw mounted on the back side. The hammer is stainless steel with a medium-width checkered spur. The Hunter Model is well set up for double-action or single-action shooting. Trigger pull is smooth and short.

Then we get to the front end of the Hunter. While not as thick as the Super Redhawk, the Hunter has some extra weight built into the barrel. Part of that is in a Picatinny rail that runs about two-thirds the length of the barrel. That pushed the balance farther forward and gave us a lot of real estate for the mounting of the UTG optic. That optic, by the way, provides a 30mm tube and a 4-minute-of-angle dot. It mounts directly to the rail on the Hunter. It is not an expensive set up at $46, but it did well for us and stood up to a decent pounding during our tests. It also allows the shooter to choose between a green or a red dot. Especially for an inexpensive optic, we were pleased with the clarity of the glass and the brightness of the dots. We never had a problem with either dot washing out in full sunlight, though the green was a bit more visible.

The front end of the Hunter brings two more nice features. The red-ramp front sight sits in a dovetail, allowing it to be adjusted or replaced. The threaded barrel has a 1.3-inch muzzle brake attached. The brake has four series of four ports alternating with four series of three ports that cover the full 360 degrees. It works. Muzzle flip was a good bit less on the S&W than our other two test pistols, allowing faster follow-on shots. It was also loud. We suggest that you wear good hearing protection when hunting with this one. Also, we noticed the UTG dot was not quite as precise to aim as the crosshairs on the Burris scopes, but it was a bit faster to pick up.

Our Team Said: We think the S&W Hunter would be a great choice for closer-range hunting. Trigger pull was less than 10 pounds for the double-action pull and just more than 4 pounds for the single-action movement, though it felt lighter than that. The M629 came in second in the accuracy testing with an average group size of 0.97 inch. It showed a liking for the 240-grain lead bullets, with a best group of 0.54 inch.

Testing was done at American Shooting Centers in west Houston. Muzzle velocities were determined via a LabRadar chronograph, $559. All shots for group were done from a well-sandbagged Caldwell Pistol Rest from MidwayUSA and aided by a mini-DRC Fortune Cookie bag from Wiebad.com. The handloads for this test were assembled using data from the Lyman 50th Edition Reloading Handbook. LSWC = lead semi-wadcutter. JSP = jacketed soft point. WNGC = wide nose gas check.