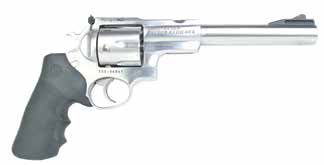 To assess their viability for use in the hunting fields, we mounted optics on all three pistols. The Super Redhawk wore a Burris Extended Eye Relief scope in a fixed 2.75-power magnification. The Colt Anaconda also held an official Burris Pistol Scope (2-7×20, No. 200291, $419), which we kept set at 2.75x to make it fair to the other Burris. Our Smith & Wesson M629 Performance Center Hunter includes the UTG SCP-RD40RGW-A, which is a 1×30 red- or green-dot optic that mounted directly to the Picatinny rail on the barrel of the S&W.

Loads tested used bullets from MidwayUSA.com, including the 240-grain hard-cast Keith-style semi-wadcutter from Hunter’s Supply (267313, $53/250), along with the 240-grain Speer Gold Dot jacketed soft point (166262, $25/100). Wanting to include something for the hunters who really need penetration, we also experimented with some Cast Performance Bullet Company 320-grain hard-cast wide-nose gas checks (141652, $45/100). Loads were assembled using a mix of brass, Winchester large pistol primers, VihtaVuori N110 or Alliant 2400 powder, and recipes from the Lyman 50th Edition Reloading Handbook. Our test results showed the VihtaVuori N110 to be a good bit more accurate for the combinations we tried. Here are the results and our opinions of the handguns:

Introduced in 1987, supposedly as a replacement for the Ruger Redhawk, both large-framed revolvers are still in the Ruger line up — proof positive that the large-bore wheel gun is alive and well with American shooters. Also available in 454 Casull, 480 Ruger and 10mm Auto, our 7.5-inch-barrel 44 Magnum sample tips the scales at almost 3.5 pounds. We like recoil-attenuating weight in a large-caliber pistol. We understand that there are outstanding large-bore revolvers with frames crafted primarily of lightweight alloys and for which there are very specific tasks. Frankly, the mere thought of shooting those makes us flinch.

The fairly straight barrel on the Super Redhawk measures about 0.910 inch at the muzzle. That translates to the actual tube of the barrel being almost one quarter of an inch thick. And the reinforcement doesn’t stop there. The frame of the Ruger is also very substantial and includes a heavy topstrap. This is wide enough and strong enough to provide space for grooves to be cut for Ruger scope rings. The rings fit into dovetails on the frame and also provide a recoil lug for both of the mounts. These rings are not going to slide to the rear on you in recoil. We did notice a tendency for the primary screws on the rings we were using to loosen just a bit. Nothing came off and we couldn’t tell that our zero ever wandered. You just might want to check them from time to time and consider some medium thread-locking compound like Blue Loctite. The muzzle sports a nice crown and an additional concave surface that further protects the rifling. The Super Redhawk frame not only sports an underlug to protect the ejector rod, it uses a full-frame extension to cover the ejector and provide additional support to the barrel. This extension covers about an extra 2 inches of barrel where it screws into the frame, making that joint very strong indeed.

The cylinder is largish, though it does have flutes. The chamber mouths are slightly chamfered, making the insertion of cartridges smoother. A large bolt protrudes deeply into the cylinder, locking it up solidly. Additional lockup is provided with the expected pin protruding from the ejector star into the breech face. There is also a lever that projects forward from the crane into the frame. Timing was excellent, and we could hear the bolt sliding into its notch in the cylinder before the hammer was released.

The Super Redhawk uses Hogue grips. In fact, all three of our tested 44s used Hogues. We call that a sign. Adhesion in our hands was good without being overly abrasive. At the same time, the grips provided a bit of cushioning while they completely covered the backstrap. On the Ruger, the Hogue grips attach to a single stud extending from the bottom of the frame. The frame proper contains all of the fire-control parts, including the springs that power the hammer and trigger. The trigger weights in both double action and single action were acceptable, but we felt they were a bit stiff and might well benefit from the proper application of some good Wolff replacement springs.

Our Team Said: Function was perfect, as we would expect on a good revolver. The Super Redhawk was in last place in accuracy, but it only missed first place by a 0.2-inch difference in group size for the best four of five. FYI, our group uses that metric because we do all testing by hand and not from a machine. We have to allow just a little bit for being human. Average group size across the three types of ammo was just over an inch at 15 yards. The Ruger really liked the 320-grain bullets, posting an average group size of 0.86 in.

Testing was done at American Shooting Centers in west Houston. Muzzle velocities were determined via a LabRadar chronograph, $559. All shots for group were done from a well-sandbagged Caldwell Pistol Rest from MidwayUSA and aided by a mini-DRC Fortune Cookie bag from Wiebad.com. The handloads for this test were assembled using data from the Lyman 50th Edition Reloading Handbook. LSWC = lead semi-wadcutter. JSP = jacketed soft point. WNGC = wide nose gas check.