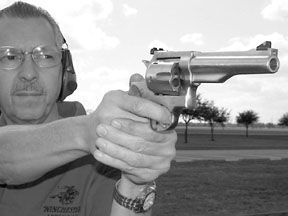 Though larger rounds have eclipsed some of the .44 Magnum’s “Dirty Harry” magic, the cartridge remains near the top of the power curve, especially when day-to-day carry comes into play. The .454s and the .480s and the .475s are simply too much powder and metal to shoot on a daily basis, but .44 Magnum remains manageable, if still high-spirited.

Almost 50 years ago Elmer Keith lobbied manufacturers to produce a beefed-up version of the .44 Special, a round which he had handloaded in Smith & Wesson TripleLocks and Colt Single Actions, among others. His handloads, according to his book Sixguns, pushed 250-grain bullets to 1200 fps in long-barreled revolvers, including Model 1926s and Model 1950s.

It wasn’t until S&W and Remington teamed up in 1954 that the .44 Magnum came to life (the ammunition was 1/8-inch longer than the .44 Special so it would not chamber in .44 Special sixguns). Remington agreed to factory-load the rounds if Smith built guns for the cartridge, and toward that end, S&W rechambered four 1950 Target .44 Specials for the new round. In those guns, the new .44 Special Magnum ran at 1500 fps and higher.

The first factory .44 Magnum revolver was completed on December 29, 1955. By the end of 1956, Smith & Wesson built more than 3000 of the 6.5-inch and 4-inch guns. By 1957, Ruger offered a retooled .357 New Model Blackhawk in .44 Magnum. In 1959, the .44 Magnum Super Blackhawk was introduced. The Redhawk double-action revolver, designed specifically to handle the powerful .44 Magnum cartridge, was introduced in 1979. That model included a mechanism to positively lock the cylinder into the frame at both the front and back for positive alignment. Redhawk models are available in blued or stainless steels and 5.5- and 7.5-inch barrel lengths.

We recently tested two steel-frame guns that shoot the .44 Magnum, the $685 Ruger KRH-445 Redhawk and the Smith & Wesson 629-6, $717. Both of these guns are available in a variety of barrel lengths, but we thought we’d try them out with shorter, more practical length barrels that offer the option of carry or increased maneuverability preferable for home defense. Also, we fired Smith & Wesson’s 329PD .44 Magnum, a $900 30-ounce large-frame revolver. While testing the steel-framed .44 Magnum revolvers, we complained that the lighter of the two, the 48-ounce Smith & Wesson 629-6, was bothersome to shoot when loaded with 240-grain magnum defense loads. So you can imagine what the 329PD did to the shooter, consider it was more than a pound lighter than the 629. Our 329PD had a stainless-steel barrel of approximately 4.1 inches.

There’s much more to tell about these three guns, as we relate in the text below:

In our examination, we saw the Ruger Redhawk differed from the Smith & Wesson revolver in several ways. First, the shortest barrel Ruger offers measured 5.5 inches versus the 4-inch barrel of the 629-6. The Ruger weighed approximately 9 ounces more than the Smith & Wesson. The Redhawk’s frame was taller from top to bottom. The top strap was wider and thicker. The line from the front of the Redhawk’s frame level with the bottom of the cylinder to the backstrap measured approximately 3.7 inches. We were surprised to find out that the 629-6 measured the same because the Ruger looks bigger. The cylinder of the Redhawk measured 1.776 inches in width, and the Smith & Wesson’s 1.700 inches. We also noticed a slight difference in wall thickness of each cylinder.

Obvious differences in size or gauge of components include a large square-butt design of the Ruger’s grip frame where the Smith & Wesson was round. The Redhawk’s hammer was longer and heavier than the 629’s, and the Ruger’s trigger mechanism used a combination of bars and springs where the Smith & Wesson relied upon a simple leaf spring. The result was that the Ruger Redhawk transferred less shock and muzzle flip to the shooter than did the Smith & Wesson 629-6. We really appreciated this because it allowed us to explore the higher end of the power range of available .44 Magnum ammunition with comfort. We went through many odd lots of leftover test ammunition in preparation for recording accuracy data and nothing fell off or loosened up.

Despite their handsome appearance, we chose to put aside the rosewood grip panels that came with the Redhawk in favor of a more shock-absorbent rubber model. The Hogue Monogrip was the first grip we found (for about $22) at a local gun store. Coincidentally, this is the very same grip that came with the Smith & Wesson 629-6 revolver. (Smith & Wesson also sends this grip along as an alternative to the fancy wood grip that adorns the titanium-framed .44 Magnum 329PD revolver). To adapt the Monogrip to the Ruger, we had to remove a locating disc in the Ruger’s grip frame and insert a yoke around the bottom of the frame. This provides a threaded socket for the screw that holds the Monogrip in place.

We found that even without the screw tightly in place the grip was secure enough to hold on to while firing. We would have liked more rubber at the backstrap, but the Hogue grip still helped make our tests more comfortable.

As a result, we preferred firing the Ruger Redhawk with more powerful loads.

Still, the Ruger came up second best [PDFCAP(2)] by a narrow margin. We chose two .44 Magnum rounds and a .44 Special round for our bench session. The 180-grain JHP/XTP .44 Specials shot very softly in the Redhawk. Average velocity was 888 fps, and five-shot-group accuracy at 25 yards ranged from 1.9 to 2.3 inches. The 180-grain JHP from PMC was the most comfortable .44 Magnum round to shoot, and with it we produced groups ranging from 1.8 to 2.1 inches.

[PDFCAP(3)]Our 629-6 was equipped with a 4-inch barrel. This is the shortest barrel currently available on the 629-series revolvers, and this makes it faster to handle. Its round-butt frame design also makes it easier to conceal. This is important to note because were we to choose between the two guns in this test based solely on our desire to purchase a carry gun, we would favor the Smith & Wesson 629-6. Placed next to each other, the difference in sizes is apparent.

In describing the 629-6, the muzzle crown is recessed with a roll-in design. The Ruger’s crown is cut at an angle. The front sight on the 629-6 is raised on a stanchion and held with a roll pin. Both front-sight blades are ramps with orange inserts, but the Ruger’s is dovetailed into the stanchion and located with a solid pin available from the front. Both guns have flattened and serrated topstraps, but the blend to the frame is less pronounced than on the Ruger, giving the Smith & Wesson a sleeker appearance.

The rear sight on the 629-6 is a pleasure to use, adjustable for both windage and elevation. The Ruger’s rear sight is also fully adjustable, but you’ll need a second screwdriver about the size of an eyeglass repair blade to work the rear sight left or right. Each gun offers a fully shrouded ejector, but neither gun features a full-lug barrel. Lockup on the 629’s cylinder is at the tip and at the rear of the ejector rod. We’d like to see an added detent.

The cylinder is released by pushing forward a checkered and relieved button, above which is a keyhole for the internal hammer lock. The Redhawk has a push-button release we like better.

Achieving a lighter pull on the Ruger would be more complicated, in our view. To begin with, simply removing the side plate will expose the internal mechanism of the Smith & Wesson. Any neophyte attempting to disassemble the Ruger Redhawk would soon find himself in over his head.

Firing .44 Special rounds in these guns, we didn’t notice much difference in how they reacted. But we observed that the 629-6 transmits more recoil to the shooter when heavy loads are used. With this in mind we would choose carefully when loading the Smith & Wesson for fast action shooting .44 Magnum ammunition. The longer magnum cases can be handloaded to any strength, but we think a lot of buyers might like to carry hot .44 Specials instead of magnums. Then again, some pistoleros will argue that due to the devastation a .44 Magnum round causes, there is no need to hurry subsequent shots.

At the range, our test rounds showed the Smith & Wesson to be slightly more accurate and consistent. Its overall average was slightly below 2.2 inches for all groups fired. That is the kind of accuracy that makes one want to buy a particular handgun.

[PDFCAP(4)]In our tests of the two steel-framed .44 Magnum revolvers above, we complained that the lighter of the two, the 48-ounce Smith & Wesson 629-6, was bothersome to shoot when loaded with 240-grain magnum defense loads. So you can imagine what happened to us when we shot them in this gun, lighter by more than a pound than its stable mate.

The Smith & Wesson 329PD is a very stylish revolver. It has a matte gray finish that works well as a backdrop for logos and graphics. Our 329PD arrived with handsome wood grip and (thankfully) a rubber Hogue Monogrip as well.

The stainless steel barrel protrudes from the sleeve, accenting its total length of 4.1 inches. The rear sight offers a V-shaped notch that traps the floating dot produced by the orange-filament light-gathering front sight. We thought the trigger of this revolver in both double- and single-action modes (15 and 6 pounds respectively) was smooth and consistent. But does it really need to be chambered in .44 Magnum?

We fired the same 180-grain PMC hollowpoints in the 329PD as we did in the Ruger Redhawk and the Smith & Wesson 629-6 and found the experience to be most unpleasant. We did not bother to record accuracy data with this round because controlling the gun was too difficult for printing groups at 25 yards. We also had difficulty ejecting spent .44 Magnum cases; they bound themselves to the chambers after ignition. This is sometimes an indication that the chambers are oversized, allowing the cases to expand past their point of elasticity.

We continued our test with the .44 Special version of this same 180-grain PMC jacketed hollowpoint bullet. Our reward was an average group size of 2.2 inches with a best single group of all three guns measuring 1.7 inches. Our results shooting with the Hornady JHP/XTP round was disappointing, with large and small groups of 2.7 and 3.2 inches respectively.

In our view, this raises the question: Should the 329PD have been chambered solely for .44 Special? In practical terms we think this would have been more realistic. But this likely wouldn’t have afforded Smith & Wesson needed marketing sizzle. Keep in mind that .44 Special-only N-frame revolvers have otherwise disappeared from the Smith & Wesson lineup, and we would assume this was due to lack of sales.

Gun Tests Recommends
Ruger Redhawk KRH-445 .44 Magnum, $685. Our Pick. If your aim is to fire hot loads aplenty and concealment is not an issue, we think you’ll be happier with the Redhawk. Furthermore, even the hottest .44 Specials were a ho-hum affair in the Redhawk.

Smith & Wesson .44 Magnum 629-6, $717. Buy It. Should one want to carry a big-bullet gun and not mind the weight, we think the 629-6 would have to be considered. While not our first choice for hot loads with heavy bullets we’re sure a satisfying combination of gun and cartridge could be found.

Smith & Wesson 329PD .44 Magnum, $900. Conditional Buy. This lightweight gun is superb when loaded with .44 Specials. We could not handle it with magnums, so caveat emptor.