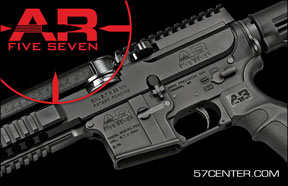 The evolution of the AR-15 continues apace, with a host of manufacturers building out the 223 Rem/5.56mm modular-rifle concept to a bevy of cartridges that offer more power (6.8 SPC, 30 Carbine) or cheaper operation (22 LR, 9mm). These chamberings appear in dozens of rifles and dozens of replacement uppers. The uppers usually cost slightly more than half the price of a complete gun, and they snap onto AR lowers, which gives owners a choice of cartridges to shoot on a given day.

On a whole-gun-to-gun basis, a new 57Center AR57A1 PDW Carbine costs $1099. The whole carbine weighs 7.45 pounds and is 33 inches long with a 16.04-inch standard barrel. It includes an AR57 Flash suppressor with standard 1⁄2X28mm threads), a custom pistol grip with battery and accessory compartment, M4 Carbine 6-position stock, and four AR57 50-round magazines. Down the road, it will certainly be interesting to compare a selection of uppers against each other, and well continue to pit guns in alternate AR chamberings, but for now, we want to gauge whether wed plunk down $600 to $700 after taxes for the AR57 PDW Upper. In our opinion, we believe there are significant reasons not to.

According to the Shooters Bible Guide to Cartridges, FN Herstal of Belgium started the development of the 5.7x28mm in 1986 as a sub-machine gun round for the FN P90 personal defense weapon (PDW) and FN Five-seveN pistol. The “5.7” part of the name might fool you since this does not use a .23-caliber bullet. Instead, it uses .224-inch-diameter bullets like other 22 centerfires. Designed to replace the 9x19mm Parabellum, the 5.7x28mm is a

bottlenecked cartridge similar to the 22 Hornet or 22 K-Hornet with a long, pointed bullet. Variations of the bullet itself include the SS190AP bullet (armor piercing, 1994), the heavier SB193 for subsonic loads, the L191 tracer, and the SS192 with a soft core instead of a steel penetrator. By 2006, FNs 5.7x28mm firearms-the P90 personal defense weapon and Five-seveN pistol-were in service in more than 40 countries, and in the United States, 5.7x28mm firearms are currently used by numerous law-enforcement agencies, including the U.S. Secret Service. In addition to being used in the FN P90 and FN Five-seveN, the 5.7x28mm cartridge has subsequently been used in the FN PS90 carbine. Accordingly, most shooters see the 5.7 as a close-in PDW that would compete with AR-15 pistols, to name one use.

Nidal Malik Hasan is currently being held in connection with those shootings. Perversely, the wide-ranging use of the 5.7x28mm to protect the president and by warring drug groups in Mexico is testament to the rounds effectiveness.

For most rifle uses, the 5.7x28mm is clearly two steps behind the 223 Remington, which is the most widely-used centerfire-rifle cartridge in the developed world. In its 5.56x45mm military form, it is the primary issue ammunition for the U.S. Military and NATO forces. (The 5.56mm NATO and 223 Remington cartridges and chamberings are similar but not identical.) Shot out of the Stag 2T, one of the test rounds, Federals 223 Rem 55-grain FMJ BP223BL, made 3069 fps average velocity, generating muzzle

Because the 5.7 was designed to replace the 9mm, perhaps the best matchup is to see how the 5.7 compares to the Parabellum in a 16-inch carbine barrel, such as that found on the K9 Olympic gun, an AR-15-style carbine with a 16-inch barrel. The 9mm carbine gets a lot of interest because of the rounds low cost and diminished penetration into walls. Weve learned that civilian sales of 9mm carbines are higher than the total number sold to law enforcement, but on the LE side, the value of the 9mm carbine for training indoors is widely recognized. LE shooters also noted that the 9mm (0.355-inch diameter) bullet produced a larger wound canal in many instances than 223 Rem. The most accurate round in our previous test was the Federal American Eagle 9mm

As weve shown above, its difficult to make a cost/benefit ballistic case for the 5.7 cartridge, which may explain the relatively low number of guns chambered for it. We were able to come up with about 10, including the PS90, FiveseveN pistol, T/C Contender, AR57 (tested here), Excel Armss X-5.7R, X-5.7P, MR-5.7, and MP-5.7, and two purported bolt-gun versions by Savage. This is a moving target, so there may be other guns in this chambering that Gun Testss readers will certainly find for us.

Setting aside the ballistic argument for now, what about the AR57 PDW 5.7X28mm Upper itself? It comes with a 17.75-inch-long, 2.77-inch-tall monolithic receiver/handguard rail machined from aluminum that offers nearly 3 feet of Picatinny rail space for mounting optics and other accessories. The rear rail contains the mag detention system. The unit itself measures 24.9 inches in O.A.L. and weighs 4.6 lbs. The receiver/handguard is made of 7075 T6 aluminum, hardcoat anodized, in matte-black finish. The barrel is 4140 chrome-moly steel with a matte-black Parkerized finish and has a 1:8.5-inch twist and 1⁄2×28 threads on the front to accept the standard A2 flash suppressor. The magazines are translucent, smoke-colored molded polymer sticks.

There are many similarities between the AR57 PDW and FNs PS90 and P90 bullpup carbines, besides being chambered for 5.7x28mm ammunition. The FN guns use 10- or 30-round magazines that run horizontally along the top of the action, and fired cases are ejected downward. In the AR57 upper, it sits on top of an AR-15 lower, and empties are ejected down through the empty magwell. The AR57 we tested came with a single 50-round FN-style polmer magazine. Some AR57 users take an AR-15 magazine and remove the guts, then insert the blank mag in the gun to catch expelled 5.7 brass. Elsewhere, the AR57 has a 16.04-inch-long ER Shaw barrel with integral muzzle brake. The action is blowback

operation and fires from a closed bolt. The free-sliding bolt is the only moving part, which means theres no gas system to keep clean.

At the range, our team enjoyed shooting the AR57/CMMG. One of the advantages of the magazines top and forward-mounted location on the AR57 upper receiver is better bench and prone shooting. Without a long magazine protruding from the bottom of a regular AR, its possible to get a lower slung-in firing position, and mag changes can be made by rolling slightly to the left (right-handed shooter) without raising up to clear a long undergun magazine. Also, we liked that the shooters support hand and arm can be put directly under the rifle in offhand, kneeling and prone positions without banging into a long magazine.

Operationally, loading the 50-round magazines was interesting and time consuming. Theres a circular table on one end of the magazine, and as rounds are pushed down into a cartridge slot, the table rotates 90 degrees clockwise to locate the round sideways in the magazine. To insert the magazine into the upper, the shooter pushes the magazine into the front latch first, then snaps the circular end down on top of the action. Then, he pulls the charging handle on the right of the unit to chamber a round. During our shooting, we had one failure to fire when the bolt didnt fully close. We worked the charging handle backward then released it forward, and the round chambered then fired when we pulled the trigger.

Elsewhere, we note that CMMGs MOD4SA semi-auto AR-15 forged lower receiver (No. L-5503) is milspec and uses standard take-down and fire control pins. Receiver is milspec hardcoat anodized aircraft grade 7075 T6 aluminum, and is Teflon coated. Internals are semiauto milspec. Receivers are RDIAS/RLL compatible. The lower was equipped with a Magpul 6-position stock, and we used an Insight MRDS for our shooting, which attached easily on the

top rail. One downside we noted was that the gun wouldnt accept a riflescope without a riser block. Using the receiver mount only, the objective bell of a riflescope blocked access to the magazine detention system.

Our Team Said: Whats the point of an AR-15 that shoots something weaker than a 223 at a higher cost per shot? Also, the limited ammo production (Federal loads the FN brand in the U.S.) and the relatively few guns chambered for the 5.7x28mm ammo give us pause. Still, even with these detractions, our shooters liked the AR57 PDW Upper in 5.7x28mm. There was nothing functionally wrong with the design or execution. We just wouldnt buy it. But we can see where a bunch of other people might want one.