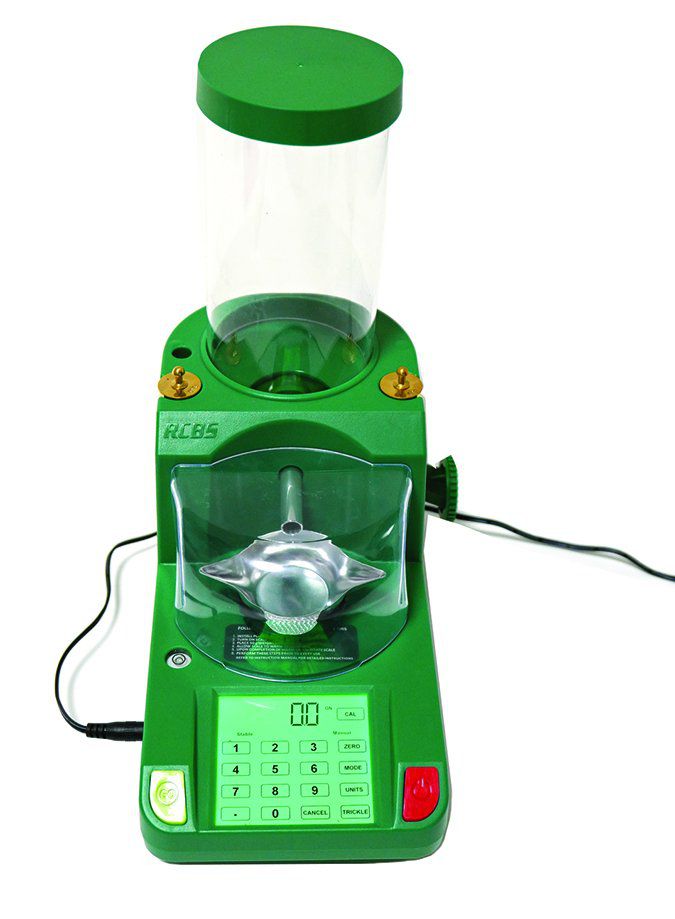 Our reloading pursuits for handguns are generally to provide volume ammunition for training at a discount based on reusable cases and bullets purchased in bulk. The progressive reloading press is capable of producing more rounds per hour than our arms can withstand. But setting the powder drop to exact quantities can be trial and error, a time-consuming exercise of repeated drops to prime the new setting and weigh out the result. But what if the new load is not what you hoped? Using a programmable automatic powder dispenser enables the reloader to quickly develop multiple loads for test without having to reset your powder measure.

Automatic powder dispensers that drop a preset amount of smokeless powder have been around for a while. The powder charge is routed from its silo into a pan seated atop a scale. When the scale reads the desired preset weight, the stream of powder is shut off. The time saved is obvious but what about accuracy? Can the most fastidious reloader rely on an automatic powder dispenser to drop powder charges with the same accuracy as the common practice of using a manual powder drop to dispense a charge just a grain or two short of the desired load, then making up the rest of the charge by using a “trickler?” A trickler is a small tankard of powder across the top of which there is a pipe with a threaded interior. The center of the pipe has a pickup hole where it crosses through the powder. As the pipe is turned, granules of powder follow the thread to its end, where it tumbles one piece at a time into a pan seated atop a scale. Programmable automatic powder dispensers feed granules of powder through a threaded trickler pipe that rotates quickly until it gets close to the desired load, then slows to a ticking movement until the target weight is reached. We wanted to know if automation would save time and still maintain accuracy.

The RCBS Chargemaster Lite sounds as though it should be a small machine, but this was a full-sized unit with 2000-grain capacity and able to dispense up to 300 grains of smokeless powder at a time. Special features included a quick-drain spout, independently adjustable feet at all four corners to take advantage of the built-in bubble level, and an LCD touch-screen display. The Go button and the on/off buttons located at either side of the unit body were not touch-screen features.

We found that the quick-drain feature was just that. Featuring a larger opening than the Hornady and smoother operation, rotating the drain spout one-half turn dumped powder from the silo quickly. But we still had to follow up with brushing out the interior, and the clear plastic silo needed to be wiped out. All three manufacturers recommend not leaving powder in the machine. The longer you leave the powder in place, the more susceptible it becomes to static cling.

Loading the Chargemaster Lite with Winchester Super Target, we punched in 4.8 grains. Over the course of ten tries, a comparison between readings on the RCBS scale and the Dillon scale told us that the two units agreed completely 7 out of 10 times. Three times the Dillon scale read only 4.7 grains, but given each unit is rated for accuracy at +/- 0.10, the RCBS was in spec.

Setting the RCBS to dispense 40.2 grains of Reloder 17 powder, we were rewarded 10 out of 10 times with quantities of powder that weighed the same when checked on our Dillon scale, with no overages.

Our Team Said: The RCBS Chargemaster Lite proved to be an accurate, well-thought-out machine that did what it was supposed to. That is, it makes higher-volume powder delivery more convenient for the operator. The touch screen was responsive without being overly sensitive, and the information was clearly illustrated. Clean up was easy, and the specially configured fill tube kept things clean.