We ordered a Regulator for a 3-inch-barrel revolver. After inspecting the fit and finish and seeing how the holster rides on the belt, our most experienced rater gave the Regulator high marks. He has written a book devoted solely to holsters. He felt the Regulator was a crossdraw version of the Avenger in some ways. The long spine of the Regulator features a belt loop that stabilizes the holster. The second belt loop, a tunnel loop design, cinches the holster close to the body. A reinforced welt keeps the holster from collapsing after the handgun is drawn. We feel that this is as good as it gets in a crossdraw holster. If you’re willing to spend the money, the Wright Regulator gets good marks on every point. Available from WrightLeatherWorks.com. 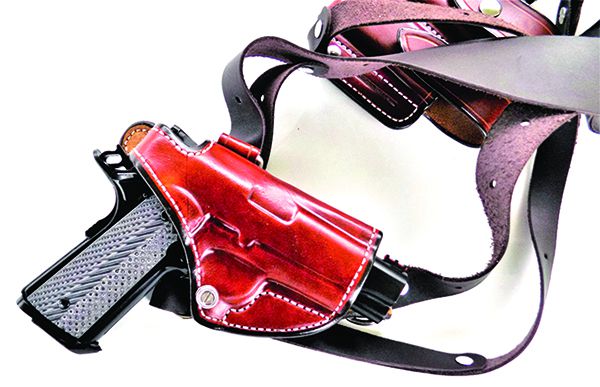 The base price for the Monarch was $275 at AndrewsLeather.com. We added a Knife pouch, $55, and a triple magazine pouch, $125, for the total price as listed above. The Andrews holster is called the Monarch because of the Monarch butterfly–like harness. The Monarch is a classic holster in some ways, but in other ways it is unique. The Monarch is exceptionally well put together. The holster body is lined. While this is critical in protecting the gun’s finish, a holster with a lined interior will wear longer as well. With modern handgun finishes or even older blued-steel handguns, handgun wear isn’t a big issue. Just the same, this is a nice touch. Some of the raters felt that the lined holster made for greater speed.

The holster is also double stitched in certain areas. The blocking and stitching are excellent. Andrews re-designed the shoulder holster to offer greater comfort and less restrictive movement. The Monarch features swivels attached to a wider portion of the leather plate at the top. This subtly different position of the straps helps fight chafing. (Andrews also offers a more traditional Y-strap design.) This holster builds on the shoulder holster concept of spreading the weight of the handgun and the magazines around the body. The shoulder holster must have some means of stabilizing the load. Some inexpensive shoulder holsters require the wearer pull the holster out to maximum extension, or that the weak hand grasp the holster to stabilize it on the draw. This is unacceptable.

Andrews designed a mid-back strap that runs around the lower back and attaches to the magazine carrier and holster components of the harness. This stabilizes the holster well and allows for a rapid, sharp draw. But this system also allows wearing a shorter covering garment as opposed to the belt attachment that demands a long garment. Shoulder holsters are notorious for sagging forward when the user bends over. The holster and magazine pouch of this rig are well stabilized. This holster affords the user a great deal of movement without concern for the holster being exposed. The rear attachment is highly adjustable. We were impressed by the sliding adjustment in the magazine carrier. The holster also features a tunnel loop that allows wearing as a belt holster.

When executing speed draws, we discovered the directional thumb snap and rigid security made for a very sharp draw. The problem with shoulder holsters is comfort on the one side, but on the other side, the holsters do not ride close and secure to the body, which affects concealment. In this case, each problem is neatly solved. We really like the Monarch. 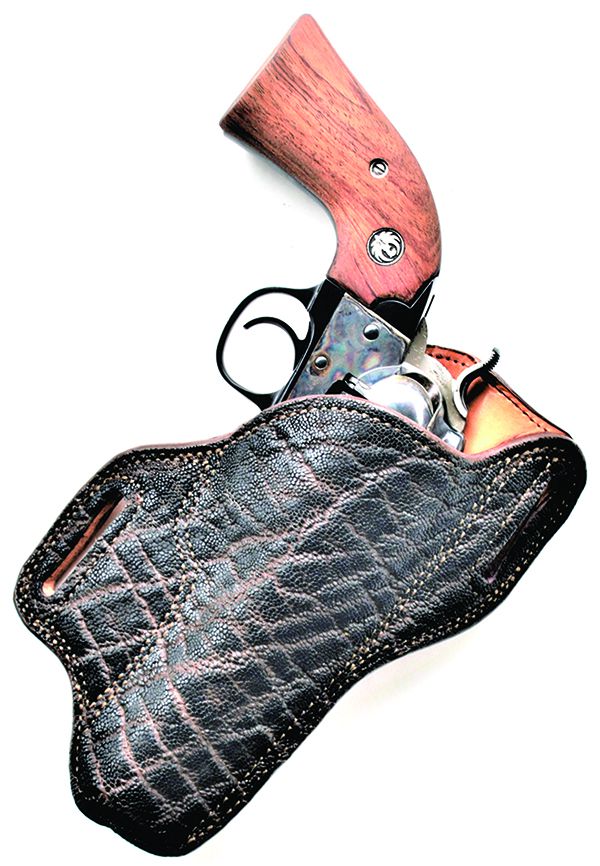 Available from DMBullard.com, the Bodyguard holster offers an alternative to the IWB for those who cannot tolerate inside-the-waistband carry, and who may wear a holster under a pulled-out sport shirt. A straight cant belt holster would present a tall holster, while the Bodyguard angles the handgun across the belt. The draw is at a severe angle, but not nearly as severe as the small-of-the-back holster, as an example. The Bodyguard as tested was ordered in hippo hide, a legal material and very difficult to obtain at times. Thus its high price. Regular leather designs run $85. This tester’s normal wear is a single-action Ruger in 44 Magnum or 45 Colt, although he may use a 45 Auto at times. The Bodyguard does an excellent job of carrying the big guns comfortably, with the weight well distributed across the belt line rather than hanging in one place and dragging down. The draw isn’t as fast as the Combat holsters offered by the same maker, or an Avenger type, but the holster succeeds at canting the handgun to an extent that a larger handgun is concealable. There really isn’t a Kydex alternative we have been able to find that equals the Bodyguard.

The angle is such that 20 draws were the limit for real speed before the tester tired. We found the draw passable, especially when the holster was worn under a heavy but unbuttoned jacket, and the primary advantage of this holster is better comfort with a heavy handgun compared to almost any other holster, in our experience. After the test was completed, there was no finish wear at all on the Ruger Bisley blue steel Vaquero. The inside of the holster was slightly polished, but no wear was apparent. We would probably recommend the standard-grade holster at $85 rather than the custom piece, but the hippo is nice if you are flush. It seems impervious to wear. 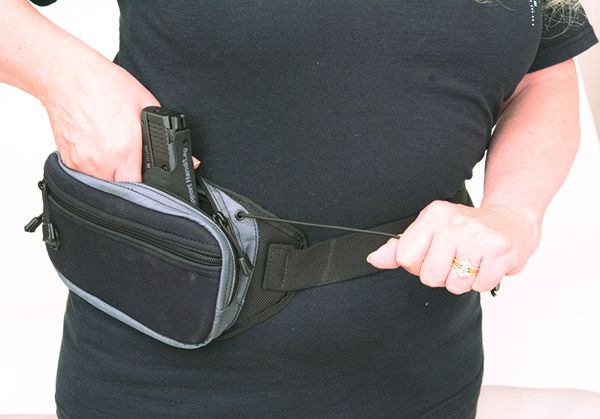 Galco Gunleather’s $99 FasTrax PAC takes on the challenge of making the fanny pack less conspicuous while offering multiple ways to put the firearm into play.

The FasTrax PAC consisted of a main compartment measuring 8.7 inches long by 5.2 inches high; width unloaded is a mere 1.5 inches wide. The space-age material that allows the FasTrax PAC to hug the body without drooping and move with the operator is a key advantage over other designs. We also found that the unit did not cause us to sweat behind the back panel of the main compartment or along the belt line.

We sometimes forgot we were wearing the FasTrax PAC because it didn’t sag and moved instinctively with the wearer. Men and women on our team agreed they should have a Galco FasTrax PAC in their arsenal.