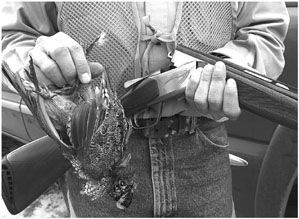 Shotgun shooters can be diehard fans of their favorite scatterguns — they are normally not the type of audience that accepts change without a lot of careful consideration. When Browning Arms broke the mold by introducing its radically different 12 gauge Cynergy over and under in 2004, the reaction from shooters was dramatic. It appeared there was no middle ground, with camps of “I love it” and “I hate it” forming across the country.

The same Cynergy configuration also appears in the company’s lineup in sub gauges, one of which is the new Browning Cynergy Sporting over/under 28 gauge. We wanted to see how it fared in a heads-up battle against a longtime favorite of traditionalists, the Beretta Silver Pigeon II 28 gauge.

It should be noted that the Beretta comes as a combo package that includes a 20-gauge barrel and forearm. For our purposes, we limited the Beretta testing to the 28 gauge barrels and did not factor in the two-gun option in our testing.

Because our group was handling and evaluating the two 28s on both the clays course and in quail hunting conditions, our test ammunition included Winchester AA HS Super Sport 2.75-inch shells with three-quarters of an ounce of No. 7 1/2 shot; and Winchester Super X High Brass 2.75-inch shells loaded with one ounce of No. 7 1/2 shot, both with a muzzle velocity of about 1,300 fps. We thought these ammo selections offered a good choice of patterning options with the light charges. Here’s our test report:

The Browning Cynergy Sporting is made in Japan and distributed by Browning USA. In addition to featuring the same radical design changes of its 12-gauge counterpart, this sub-gauge shotgun is easy to handle and seems to help put the shooter right on target.

Smooth handling ability was one of the first observations of all the test shooters, whether the testing was conducted on the clays course or over dogs pointing quail.

Because of its overall balance, even clay targets at ranges more appropriate for 12 gauge guns were not a problem for the tiny 28. Recoil, which is not normally a factor with 28 gauge shotguns, was absolutely no problem with the new Cynergy. As stated by the manufacturer, the shotgun’s inflex recoil pad system (the pad is much larger and features more open spaces in the half-moon shape that curves back into the stock) reduces felt recoil by as much as 25 percent. Our testers found that claim to be correct.

Putting the shotgun together takes a little adjustment for shooters accustomed to normal over and under techniques. The Monolock Hinge technology requires more pivot, but it also increases the surface area connection between the mono block and the receiver, reducing wear.

Billed as the smallest low-profile sub-gauge shotguns on the market, the Browning test gun was 47.25 inches in overall length, with a 30-inch barrel and a length of pull of 14.25 inches. Only the 12 and 20 gauge Cynergy shotguns come with ported and back-bored barrels.

Tipping the scales at 6.5 pounds, the balance of the Cynergy was very good between the shooter’s hands. Both triggers fired with about 5 pounds of pressure, and because of the reverse striker system (more like a rifle than a shotgun) there was a very pleasing quickness to the second shot.

The drop at the comb was 1.75 inches, with the drop at the heel of 2.25 inches. None of our test shooters experienced problems adjusting to the unusually shaped stock.

By aligning the center white bead over the chartreuse-colored light pipe of the HiViz Pro-Comp sight, as recommended by Browning, our test shooters were surprised by the pointing ability of the shotgun. Being able to get and stay on target by properly looking down the rib were big pluses for our test group.

This quick and accurate method of staying on target was particularly helpful in the field where flushing quail tested our shotgun skills, and for longer range clay targets.

In both cases, misses were generally attributed to shooter error rather than the shotgun.

Sleek, attractive and with a solid heft that makes for comfortable shooting, the Beretta has seen countless hours of hunting time. More than just a field gun, the Silver Pigeon is quite acceptable as a clay target shotgun. However, in the field is where this shotgun really shines, and for all-round users, there can be a slight handicap if this is the one gun they want to use for both birds and clays.

Our Beretta was 45.0 inches in overall length with a 28-inch barrel (no 30-inch barrel options are offered by Beretta in their sub gauge combo) and a length of pull of 14.25 inches. As noted earlier, the combo package comes complete with the 20-gauge barrel and forearm, which can be a big plus for someone interested in a two-gun opportunity. However, for our test purposes, only the 28 gauge barrel was put into service.

The drop at the comb was 1.75 inches and the drop at the heel was 2.5 inches — typical for traditional shooters and offering a comfortable set up for all members of our test group. We were very surprised at the crisp, light trigger pull of the Beretta, with both triggers tripping at only 3.5 pounds of pressure. Most factory shotguns have a much higher trigger pull, and our test group members were very pleased with the light touch off.

On the clay course, our test shooters were generally satisfied with the performance of the Beretta 28, although it was a little more whippy on long distance targets. We believe 30-inch barrels would have improved the sub-gauge shotgun balance. Also, clay target shooters generally opt to remove the automatic safety feature that causes the safety of the shotgun to return to the safe position every time the firearm is opened.

However, in the field and shooting over dogs, the quickness of the Beretta was a definite benefit in bringing down flushing quail. Quick to point and fast moving, this shotgun performs best in hunting situations. It looks and feels like a quality hunting firearm.

• Browning Cynergy Sporting 28 gauge, $3,080. Our Pick. Its radical new look and excellent handling ability are a winning combination for this sub-gauge shotgun, both on the clay course and in hunting situations.

• Beretta 687 Silver Pigeon II Combo 20/28 gauge, $3,295. Buy It. Built for field use and finding favor with traditionalists, this little gun handles well but was edged out by the Cynergy on the clay-target course.