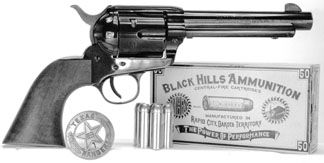 According to a number of online dictionaries, there is no definition listed for the term, “cowboy gun.” Nevertheless, the popularity of revolvers descending from the Colt Single Action Army has brought new meaning to these words. Since 1999 we have tested at least 18 different handguns that fit what we define as a cowboy gun, and now there are two more entering the market.

The Taurus Gaucho No. SA45B, $499, and the Heritage Manufacturing Big Bore Rough Rider No. RR45B5, $379, are six-shot single-action revolvers each with 5.5-inch barrels and chambered for 45 Colt. Some refer to this 1.6-inch-long straight-walled case with a 0.454-inch diameter bullet as .45 Long Colt, but in either case this caliber did not actually exist in the 19th Century. What is important is that these guns are for pleasure first, and they do not come with big price tags.

But their budget prices don’t mean we’re going to let them off the hook should they prove wanting in one area or another. Physically, the Gaucho and the Rough Rider could not be closer. Indeed, since they are replica guns, any variation from form, whether a positive innovation or not, would more than likely spoil their appeal. Both guns are dark-blued steel. Both guns have a tall front sight and a rear sighting notch exposed when the hammer is pulled back. Sight radius was equal. Each gun cylinder rotated clockwise, and with the loading gate open, the cylinders clicked with the indexing of each chamber. Ejector-rod movement was approximately 2.7 inches for each gun. The hammers on each gun lacked firing pins, using instead a transfer-bar system for greater safety. The Gaucho featured a plastic grip, but the grip on the Rough Rider was wood. The shape of the bell-shaped grips each started with a wide base that tapered to a 4.1-inch neck. Their weight, size, front strap and back strap height were nearly identical.

With so little to distinguish the two guns, our main concerns in this test were accuracy, fit, and function. Our test distance was 25 yards from a sandbag rest with four different choices of ammunition, two modern and two others sold in boxes decorated with Old West graphics. The modern rounds were Winchester’s 225-grain Silvertip hollowpoints and Remington’s 225-grain lead semi-wadcutters. The remaining ammunition brands, likely being marketed to Cowboy Action shooters, were 250-grain lead flat-point rounds from PMC and Black Hills Ammunition. We also looked back at other .45 Colt cowboy guns we have tested to see how these two newcomers stacked up within the category overall.

The Rough Rider RR45B5 belongs to the Big Bore series from this Opa Locka, Florida-based corporation. Unlike the company’s rimfire models, the components of the Big Bore guns are manufactured by Pietta of Italy and assembled by Heritage Manufacturing here in the states. Available finishes are blue, case hardened, and stainless steel. Available barrel lengths range from 4.75 inches to 7.5 inches. The MSRP on each gun, whether chambered for .45 Colt, .357 Magnum or .44-40, was the same. The Big Bore models, which are centerfire guns, differed from the Heritage Manufacturing rimfire models by not including their unique frame-mounted thumb safety. Other than the cocobolo wood grip panels, the only obvious external differences between the Gaucho and the Rough Rider were the contour at the leading edge of the cylinder and the cut of the cylinder locking lugs. Also, the Rough Rider’s trigger appeared shorter and stubbier than the Taurus revolver’s, and its face lead the trigger finger to its tip. To us, it felt like there was a ball or a mild point beneath our trigger fingers. The Rough Rider’s trigger was marginally heavier than the Gaucho’s, just enough to be noticeable. Loading and ejecting the rounds was flawless. Removing the base pin to extricate the cylinder from both guns was simple enough, but also a little sticky, too. The inertial firing pin on the Rough Rider was held inside the frame by a bushing that was visible with the hammer pulled back. The Taurus system was a little neater, in our opinion, with the holding pin barely visible. But we liked the sights on the Rough Rider better. The rear notch of the Rough Rider was clearly defined and the front blade was squared off, making the desired sight picture easier to discern.

At the range, we learned that the Remington rounds packed the most power, producing almost 400 foot-pounds of muzzle energy when fired from the Heritage Manufacturing revolver. The 250-grain lead flat-point rounds from PMC and Black Hills Ammunition lagged considerably in this department, but this was not a surprise. What was surprising was the difference in velocity (and power) achieved by shooting the same ammunition in the Taurus Gaucho. In all four cases the Rough Rider pushed its slugs much faster than did the Gaucho. The average difference for the Winchester and Remington rounds fired from the Rough Rider was an additional 128 fps on average. The Black Hills and PMC rounds flew about 102 fps faster. The Heritage Manufacturing Rough Rider literally offered more bang for the buck, but what we really liked was its accuracy.

The Rough Rider shot to point-of-aim with the 225 grain rounds and just a little higher than our 6 o’clock hold when we fired the 250-grain rounds.

The best single groups were achieved with the Black Hills and PMC 250-grain rounds, (1.3 and 1.4 inches respectively), but the Winchester Silvertip HP rounds were right behind, (1.6 inches). In fact, all but the Remington rounds helped us achieve an average group measuring 2 inches or less.

Taurus International is based in Miami and imports its firearms primarily from its factories in Brazil. The company’s catalog includes a variety of pistols, revolvers and even some long guns. The Gaucho line of single-action revolvers lists more than 30 different models in calibers .357 Magnum, .44-40 and .45 Colt, according to the website, http://www.taurususa.com/.

Our blue-steel Gaucho could be considered a base model. The grips were plastic instead of wood, but their design was pleasing nonetheless. The grip panels have a classic look with inlaid checkering and a bright brass fitting for its set screw. The Taurus emblem on the grips was distinctive. The trigger was slender and smooth, and we liked the smooth sweep of its action better than the one found on the Rough Rider. The front sight on the Gaucho was tall and slender, but we think the visual package produced in concert with its rear sight was not as helpful to the shooter as the one found on the Rough Rider. But we thought the finish on the Gaucho, an ink-like deep blue, was better than that of the Rough Rider. The hammers on each gun were checkered, but workmanship at this point was noticeably more uniform on the Taurus.

We mentioned above that the Gaucho delivered substantially less velocity and power than the Heritage Manufacturing revolver. The Gaucho’s accuracy was also well behind the Rough Rider, but still well inside acceptable limits at 25 yards. The Winchester and Remington ammos produced groups that averaged approximately 2.5 inches across. The rounds from Black Hills and PMC averaged 3 inches plus. However, the most disturbing element of the Gaucho’s performance was its inability to shoot to point of aim. We measured a variance of approximately 8 inches high for the 250-grain rounds and about 7 to 7.5 inches high for the 225-grain rounds at 25 yards. What makes this untenable is the fact that replacing the front sight with one that is taller is just about the only way to cure this.

Heritage Manufacturing Big Bore Rough Rider .45 Colt RR45B5, $379. Best Buy. The Rough Rider offered a satisfying traditional look and shot sub-2-inch groups at 25 yards. In our opinion the Rough Rider is a bargain for the budding Cowboy Action shooter or anyone who wants a big-bullet single-action revolver.

Taurus Gaucho SA45B .45 Colt, $499. Don’t Buy. This is a good-looking gun, but it developed less power than the Heritage and had a penchant to shoot high. The company might fix the point-of-aim problem, but we would choose to avoid the extra hassle.

Among the .45 Colt single-action revolvers previously tested in Gun Tests, only three were challenged to shoot groups from a distance of 25 yards. In the April 2001 issue, we tested the $450 Ruger Bisley Vaquero, Cabela’s $200 Millennium revolver, and a genuine First Generation 1907 Colt SAA valued at about $1,500. This last piece was certainly outside the category of budget priced guns, but a look at our data from 2001 tells us how far we have come in terms of manufacturing these guns. Both the Taurus Gaucho and the Heritage Manufacturing Rough Rider were able to shoot on par with or eclipse the performance of each of the previously tested guns from 25 yards. One selection of test ammunition, the Black Hills 250-grain RNFP rounds, was common to both the April 2001 and February 2006 tests. The average groups achieved by the Ruger and Colt revolvers were 3.0 inches and 3.2 inches respectively. The Heritage Manufacturing Rough Rider shattered these marks with five-shot groups ranging in size from 1.3 inches to 2.4 inches.

Looking at guns that excelled in our 15-yard tests we can point to some potential winners. Ruger’s $583 New Vaquero (March 2005) was way ahead on accuracy points, but suffered from indexing problems and was sent back to the manufacturer. We liked the $379 Ruger Vaquero that we tested in June 1999 even better because its accuracy at 15 yards, firing the same type of Black Hills 250-grain rounds we used in our current test, averaged less than 1.3 inches at 15 yards with exceptional consistency. This gun is currently available with either a 5.5-inch or 7.5-inch barrel for $555. Cabela’s Millennium .45 Colt, $280 (March 2005), excelled with a handload, despite having only a 4.8-inch barrel. But it didn’t have a transfer bar system, which limits its safe carry capacity to five rounds. The American Western Arms Peacekeeper (July 2003) was another Colt clone that performed well, with a best 15-yard group of 0.8 inches, firing Ultramax 250-grain RNFP lead ammunition. No transfer bar here either, and this specific $835 model no longer appears on the http://www.awaguns.com/ website.

But we have to remember that in the world of cowboy guns, looks count. One reasonably priced revolver that stood out in terms of visual authenticity was the Cimarron P (June 1999), which looked more like an heirloom than a reproduction currently listed at $599. But we think the Heritage Manufacturing Rough Rider, and the Taurus Gaucho for that matter, provide an adequate dose of Old West charm nonetheless. In the end our overall pick in terms of accuracy and money spent remains the Heritage Manufacturing Big Bore Rough Rider.