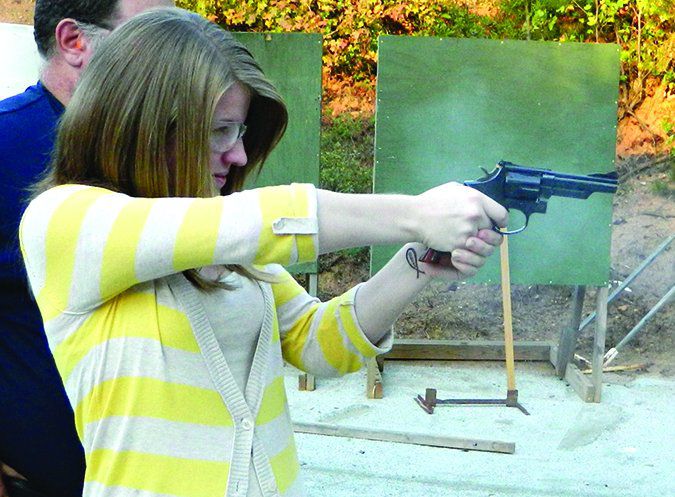 When it comes to the 357 Magnum cartridge, the consensus is the round is a great performer. The cartridge has taken deer, bears, and even larger game. However, the rub is that these exploits were made with larger revolvers, often with barrels of at least 6 inches. When it comes to personal defense, most folks are going to carry a 2-, 3-, or 4-inch-barrel revolver. So, for those shooters who prefer the wheelgun, the Magnum needs to work in a shorter barrel.

The slow-burning powder used in Magnum loads is often a canister grade of Winchester 296 or Hodgdon H 110. This powder develops its power and velocity from a slower burn. Purpose-designed defense loads must use relatively faster-burning powder, usually a powder in the middle range. Another problem with accuracy and consistent performance is bullet pull. The lighter bullets used in defense loads often do not show as consistent a powder burn as heavier bullets, and this limits velocity with 100- to 110-grain bullets. However, makers such as Cor-Bon seem to have perfected a loading process that has solved many of the problems with bullet pull and have even gotten a consistent powder burn in short barrels. More pertinent in recent years, the Magnum has been downloaded. In present form, SAAMI specs restrict 357 Magnum pressure levels to about the same as 9mm +P+ loads.

When you consider the flash, blast, and recoil inherent in the Magnum cartridge, the question must be asked: Is the 357 Magnum the best choice for personal defense over other revolver cartridges? We believe it is. The Magnum offers excellent performance in a relatively compact package that the big-bore revolvers cannot match for speed and packing ability. The Magnum is superior to the 38 Special, no matter how hot the Special is loaded. In the May 2012 issue, we looked at the 357 Magnum for animal defense and also have looked at the 9mm versus the 357 Magnum. In this report, we are looking at the 357 Magnum solely as a personal-defense cartridge and letting the Magnum stand on its own.

There are several concerns in choosing the 357 Magnum for personal defense. One of our raters has a great deal of police experience. He noted that the 22 LR, as an example, was a proven, though under-regarded, self-defense round when fired from a rifle largely because of the ease with which accuracy was obtained. From a pistol, the results are often dismal, so the shorter-barrel, lighter revolvers might also produce poor results. Another concern is muzzle blast. The concussion inside a home could be severe, the muzzle blast is tremendous in dim light, and sometimes the flash causes night blindness. The Magnum might literally leave you deaf and dumb. However, some modern loads are especially treated to create only light muzzle flash, and as a result, they are much better suited to personal defense. If you choose a heavy hunting load and fire it in a 4-inch barrel, you will probably experience excess muzzle blast. If you use the 110-grain Cor-Bon personal-defense load, you will not experience this excess muzzle blast. The Buffalo Bore 125-grain Tactical load is another excellent choice, carefully tailored to personal defense.

Recoil is another concern, and this is another reason that solving the issue of bullet pull with light bullets was so important. Developing lightweight bullets with good performance was critical, and the Barnes X bullet, the Hornady XTP, and the Speer Gold Dot are finally offering what shooters needed. The Magnum was designed for use in a large-frame revolver. These revolvers are heavy, bulky, and slow to put into action. The K-frame revolvers are probably ideal and a realistic minimum for control. However, modern designs with pistol grips that set the metal of the frame apart from the shooter’s hand are able to make even light revolvers comfortable, or at least tolerable, although the ultralight wheelguns are very problematic when chambered in this caliber. You can make a light 357 Magnum revolver, but control is another matter. Those choosing the 357 Magnum cartridge tend to believe that a single hard hit is more important than a tight cluster of holes on the target.

A final concern, and a very important one, is penetration. The 357 Magnum with 158-grain JHP hunting loads, hollow point, not soft point, loads, will penetrate as far as 20 to 24 inches of water. Heavy soft points and lead semi-wadcutter loads will penetrate even more. Such penetration is needed for taking game animals. For this reason, and also due to training concerns in police work, the 38 Special was often seen as the urban load and the Magnum as the rural or highway-patrol load. The penetration of the Magnum is a liability in the city, and its abilities are wasted to an extent.

A great advantage of the Magnum that isn’t always appreciated is its accuracy potential. A 4-inch-barrel Combat Magnum revolver with good ammunition is capable of making hits on a target well past 100 yards. Drop is minimal compared to most other handgun cartridges. The Magnum has many advantages for those living the rural life who may have to defend themselves against a rifle-armed opponent at longer range, or who may need to drop a coyote or feral dog on the property. In close-range personal defense, the Magnum’s advantage is in terminal ballistics. The Magnum develops enough velocity to instigate expansion in a properly designed hollowpoint bullet.

Here are our results for 357 Magnum ammunition examined for home defense or self-defense carry. The test handgun was a Smith & Wesson Model 66 357 Magnum with a 4-inch barrel. Most of the ammunition was acquired locally in South Carolina, unless otherwise noted.

Priced at $35.78 from MidwayUSA.com, the Black Hills load is packaged in a 50-round box at an attractive price, earning it the Best Buy nod. This load exhibits modest recoil for the performance, while maintaining penetration in the ideal range at 14 inches along with good expansion and 100% weight retention. Velocity isn’t at the top of the list, so this load is controllable in double-action pairs and offers all of the power most shooters will wish to handle in a 35-ounce revolver.

This is a heavy 357 Magnum load priced at $28.80/20. Velocity was greater than advertised, and this loading produced some 632 foot-pounds of energy. A colleague tested the same load and found it produced 1482 fps from his personal 3-inch-barrel revolver, while another reported 1271 fps from a 2-inch barrel. The Hydra-Shok offers greater penetration than the lighter loads although by only an inch, but the impact is tremendous and scattered the water jugs. Obviously, this is the strongest load, and then recoil is right at the edge of control.

This cost $30.35 per 20. Hornady has done its homework with this load. Expansion is a little different than conventional hollowpoint ammunition. The polymer tip really does seem to work, and in a number of tests in all calibers, the Critical Defense load has been very consistent. Accuracy has been good to excellent in all revolvers we have tested the load in, and the FTX bullet is very consistent in expansion. The Critical Defense load expands to a higher degree than some conventional bullets. Velocity was good, but not so much that it battered the shooter or the firearm. It should prove attractive for shooters who want a load that will expand even after meeting heavy clothing or bone.

A box of this cost $37.80. We need to stress that this is the Tactical, not the full-power, Buffalo Bore load. The Tactical line is designed to offer good personal-defense performance with control. The Buffalo Bore Tactical is well balanced with good control, low flash, and good accuracy. The solid-copper Barnes bullet has a shank even when fully expanded. This probably means that load density and bullet pull are more manageable than in the past with conventional cup-and-core-type bullets.

Our price at MidwayUSA.com was $25/20 for this load. While pricier than the other lightweight loads and offered in a 20-round box, the Cor-Bon 110-grain JHP offered excellent performance. Recoil was modest and muzzle flash controlled. Accuracy was excellent. Cor-Bon wisely chose the Gold Dot bullet and loaded it for optimum performance and good control. Both penetration and expansion are ideal. Energy is a smashing 460 foot-pounds. All of the raters were enthusiastic about this loading. One rater who formerly did not trust lightweight bullets admitted that the 110-grain Cor-Bon loading offered better performance than the various 125-grain JHP loads he had previously deployed, but with less recoil and muzzle blast. This is a good choice for personal defense. Perhaps this is as close to an ideal loading for home and urban use as possible.

We paid $34.50 for 50 rounds of this load. The Silvertip isn’t that pricey when the 50-round box is considered. Accuracy was good, making the Silvertip a load that would serve well for all-around use, not only for personal defense, but also the occasional deer at moderate range as well. Accuracy cannot be faulted, and the balance of expansion and penetration favors penetration. This would be a good load for those facing attackers in heavy clothing. One of the raters has studied the issue extensively and noted that the heavier the opponent, the more the need for penetration and the greater the expansion that might be expected. The Silvertip is a hard kicker, but it’s right for those favoring penetration.

We bought this round for $21.23 per 20 cartridges. Pow’RBall is a projectile designed to offer perfect feed reliability in self-loading pistols. However, the design also ensures expansion without the use of a hollow sump in the nose. Old-generation hollowpoint bullets would close up if they struck hard materials, while the Pow’RBall will always expand on impact. This was the lightest-recoiling load tested, was accurate enough, and had fragmentation that limited penetration. The performance profile is predictably very similar to a 9mm +P+, and those loads have excellent reputation.

We purchased this round for $28.50 per 50 cartridges. This is a traditional 110-grain jacketed hollowpoint that is loaded lighter than the 125-grain load for greater control. Though it is another light-recoiling load, muzzle blast was greater than the Cor-Bon 110, we thought. The 110-grain JHP fragments, which is something a number of shooters admire, but we would like more penetration. This load fills a niche in the scheme of things for the recoil shy and hits harder than any 38 Special. In a 50-round box, the price is appealing.

Priced at $30.35 a box, this is really a long-barrel-handgun load, really better suited as a member of the LeveRevolution line. The 140-grain bullet demonstrated remarkable velocity for the weight, but we double-checked the chronograph, and we were getting a lot of horsepower out of this load. However, while penetration was on the long end, expansion wasn’t that great. The expanded nose was really just bulged, although it was bulged consistently. This load is designed for use in a lever-action 357 Magnum carbine, so it understandably demonstrates more recoil than we like. The 125-grain FTX is a better choice for personal defense, in our view.