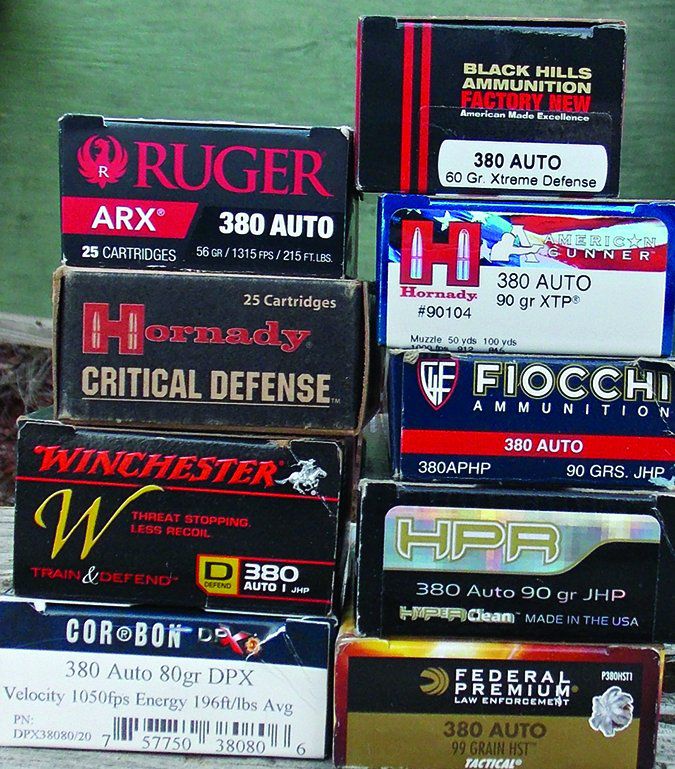 In the October 2010 issue we published a report on 380 ACP defense loads. The work was interesting and reader feedback intensive. During the tests, the loads proved accurate and reliable. The problem was the balance of expansion and penetration. We had either adequate expansion or good penetration but not each in the same loading. Some loads penetrated as little as 9 inches, with the average load at 12-13 inches. Expansion was modest in most cases. As a result, we felt that the full-metal-jacketed non-expanding bullet was a viable choice. Surprisingly, even FMJ loads penetrated but 14 inches in water in that test. So, the search was on for a loading that might offer superior performance to the original test choices.

This time, we tested ten different loads using the same media — water and water jugs — and came away with a couple of loads that showed good promise for personal defense.

Is the 380 ACP Enough for Self Defense?

Since our initial test, many readers have continued to ask us about the effectiveness of the 380 ACP outside the ability to make highly accurate shots. However, FMJ loads do not necessarily solve every problem. A lightweight FMJ bullet is far more likely to stop short in penetration than a heavier bullet of moderate velocity. Often, a heavier-for-the-caliber-bullet will penetrate more even at lower velocity.

In our experience, modern shooters tend to look at the 380 as a lighter alternative to the 9mm, but a better comparison is between the 38 Special snubnose and the 380. So, as a point of reference, we included a middle-of-the road 125-grain JHP 38 Special +P load fired from a 2-inch-barrel revolver to represent an average for performance with the 125-grain JHP. It makes a striking example of how the 380 ACP fares against what we believe is at least an adequate 38 Special load. Also, for your convenience, we’ve listed the performance of the first round of 380 ACP loads we tested six years ago. Also, the top-ranked loads from the first test were the Fiocchi FMJ 95-grain No. 380FMJB and Speer Gold Dot 90-gr. No. 23606.

We fired horizontally into gallon jugs at 10 feet. The jugs are 6 inches deep, so measuring penetration was a simple thing if the bullet penetrates at least two jugs. Often the bullet barely penetrated the third or was found resting in place at the bottom of the jug, allowing interpretation of the distance traveled.

We used a Bersa 380 ACP in the last test program, but this time we used the Grade A-rated Rock Island Baby Rock 380 ACP reviewed elsewhere in this issue. We did not use one of the DAO pocket guns also included in that test because, frankly, it would have been a struggle to generate enough accuracy to hit the water jugs. We felt that the Baby Rock was a good choice for providing enough accuracy in a downsized handgun, and the accuracy section of the test demanded a pistol of sufficient size to make accuracy testing viable as a comparison of the loadings. Accuracy was conducted at 15 yards in respect to the limitations of the caliber. Here’s what we thought of each load.

This load gave unexpected results. This is the fastest load tested over 70 grains, and it is heavier than the average 90- to 95-grain JHP. Yet velocity was high at a solid 1043 fps average. Energy was greater than any other load tested in this match up or in 2010. Recoil was greater than the other loads, but it was not uncomfortable. Performance was excellent, with penetration to a full 13 inches and expansion to .70 caliber. This is the load to beat and is easily the most impressive JHP loading. The two non-expanding loads equaled this penetration, and the Cor-Bon JHP exhibited an inch greater penetration, but with less expansion.

Costing $1.30 per shot, this 60-grain load uses a solid all-copper projectile. Penetration is superior to the Ruger ARX solid bullet. Velocity is slightly higher. Penetration was on the level with the Cor-Bon 70-grain JHP and the Federal 99-grain HST. The all-copper bullet is intended to cause damage by a cutting motion as it spins into the target rather than expansion and to offer adequate penetration in all situations.

The Rock Island 380’s magazine spring was stiff, and when loading the Black Hills round and thumbing the rounds into the magazine, raters noticed that the nose was quite sharp. We did not need bandages, but we could have had we not noticed the edges early. This bullet is a good choice for personal defense. Among non-expanding loads, this bullet is much superior to a FMJ bullet, in our view. It is also superior to the ARX-type bullet, based on design and performance. Another component of the load was light recoil. This was easily the most pleasant load to fire. Accuracy was likewise outstanding, being bested only by the Hornady XTP and the HPR loads. If you do not trust JHP loads in your 380 ACP, this is the best choice.

The American Gunner XTP gave credible results, including the best accuracy of any load tested this time around. The XTP is a proven bullet that offers good expansion in most scenarios.

The Ruger ARX load is designed to offer an alternative for those who feel that JHP loads do not offer adequate penetration. The ARX load is reliable and accurate enough for personal defense, although it was the least accurate load tested with the Baby Rock and also in a side test with a Beretta 84. Penetration was equal to the Black Hills Ammunition non-expanding load; however, accuracy was not as good. We feel that the LeHigh-designed all-copper bullet used in the Black Hills ammunition has greater potential for doing damage due to its construction. The Ruger ARX is more affordable.

This Fiocchi load doesn’t use the XTP bullet, although Fiocchi also offers a 90-grain Extrema load using the XTP bullet. This load was typical of 90-grain JHP loads, although faster than the HPR and FTX loads at 927 fps. Penetration is 12 inches, tied with the Winchester Defend and the Hornady XTP. Expansion is reasonable, though the jacketed hollowpoint bullet generally separated from its jacket. There are two advantages to this load: price and quality control. It is more affordable than most, coming in at 35 cents a round.

This ammunition has been very hard to find at the time of the writing. The Cor-Bon jacketed hollowpoint uses an all-copper bullet. The price is reasonable for an all-copper JHP, in our view. This is load is fast at 1104 fps on average. Accuracy and function were acceptable. The Cor-Bon load is tough to rate because penetration was adequate, but expansion was disappointing at .46 caliber. Expansion was typically one shard outstretched. However, the load did expand and did penetrate adequately. The slower and more affordable HPR JHP was nearly as good a performer. The HST was clearly superior in the JHP loads, so the Cor-Bon load suffers in comparison.

The Critical Defense was designed for civilian scenarios rather than police scenarios, according to Hornady, and offers good expansion in most situations. The red plug in the nose was found floating in the water jugs as we tested this bullet. It travels with the bullet and instigates expansion. However, this bullet did not expand as well as the XTP in the jugs. Penetration was an inch less on average and expansion slightly less as well.

This load is accurate, clean burning, and offers good function. We ran across an interesting expansion threshold in this loading. It is 49 fps on average slower than the Hornady XTP loading, which uses the same bullet. As a result the HPR load exhibited .45-inch expansion versus .52 inch with the Hornady load, but also penetrated an inch deeper. One shooter or the other may prefer either load. Overall, it is an affordable and credible choice that lost a step on expansion.

The Winchester jacketed hollowpoint exhibited good function, a clean powder burn, and good accuracy. Expansion is good, and second only to the Federal HST. However, penetration at 11 inches was on the lower end of what we like in a defense load. The load has its good points, but we rated it down based on penetration.

This load promised 1250 fps and delivered 1280 fps on average from the Baby Rock. However, velocity ranged from 1260 to 1320 fps with a high deviation. Accuracy was not great, but no worse than some of the other loads. Energy was the second highest, just short of the Federal HST. The bullet is an all-copper design with six petals. The petals are designed to break off during penetration and travel on their separate path. Each petal weighs about 6 grains, which does not install confidence in their ability to penetrate. The base traveled to about 6 to 9 inches in water. The shards were found in the first water jug. Some exited the jugs, so claims of radial dispersion seem borne out. The bullet is sharp, so caution must be applied when loading the magazines, and the Baby Rock has stiff magazines. Feed reliability was perfect. The low penetration puts this load toward the bottom, and the high price isn’t consummate with its performance, in our opinion. This load would be useful for pests at short range, as it is highly unlikely to ricochet in one whole piece.

Higher-Retention Holsters: We Test Seven Candidates for You