Rather than require an outdoor enthusiast to consider carrying both a range finder and a pair of binoculars, the option of an all-in-one package is being offered by several manufacturers with experience in the field of optics. Using the combination gear, the shooter or hunter can both get a better look at the animal, bird, bush, building or other object that is down range, and with the push of a button, can determine the distance to that object. That can be a valuable piece of information.

To conduct [PDFCAP(1)] of both the optics and range-finding abilities of the models, a tape measure was used to determine the exact distance from a reflective sign at 75, 100 and 200 yards. Each of the models was then placed on a tripod to avoid human error, and the readings were recorded. Objects at longer distances were also viewed and recorded in a variety of settings. One real-world test: Every model provided our testers with a clear 150-yard view of a one-inch tine on the rack of a deer. The rack, normally adorning a hunter’s wall, was positioned in a brushy location similar to what you might find on a South Texas hunting ranch.

Although several models had a maximum range listed as 1,500 yards, we were not able to record any readings beyond 1,120 yards on our selected targets. More reflective targets might produce better results for consumers.

Here is our report:

Bushnell Yardage Pro Quest
8X36 Laser Range Finder Binoculars No. 20-0836, $600
The model is made in Japan and is imported by the Overland Park, Kansas-based company. Several features of the Bushnell model were immediately favored by our test group, including the light neoprene carry case, the heavy-duty rubber exterior on the compact binoculars, and the easily adjustable focus and eye relief. In addition, the members of our group who wear glasses were very pleased with the rubber eyecups that could be rolled down for better viewing ability.

We also gave good marks to the slight indentations on the bottom of the rangefinder that, combined with the rubberized surface, provide a sure, firm grip. The model also features an easy-open latch for installing or replacing the unit’s 9-volt battery.

Our test group was very impressed with the clarity, light-gathering ability and sharpness of the view through the 8-power binoculars and with the small circle sight, rather than the customary cross or “X” to put the glasses on target.

At 2.12 pounds, the weight of the Bushnell model was acceptable and easy to handle. In the range testing, the Bushnell readings were consistently one yard over the measured distance (within their advertised margin). The longest distance measured in a hand-held situation was 870 yards and the shortest distance was 15 yards. Depending upon reflectivity of the target, the unit’s advertised range is 15 to 1,300 yards, with a field of view of 340 feet at 1,000 yards.

Leupold & Stevens Inc. Wind River
8X32 Laser Range Finder Binoculars Model RB800, $700
The product is made in China, and Wind River operates from Beaverton, Oregon. Compact and easy to handle, this model comes complete with a hard-cover, clam-shell carrying case that provides good protection in rugged conditions. We noted that unlike the other models, the Wind River range finder requires a 3-volt battery that can be more expensive than the more common 9 volt. However, installation of the battery was easy, courtesy of the twist off latch.

Adjusting interpupilary distance was a simple matter of moving the two separate body pieces apart. Each eye-piece, like all the other models, required individual adjustments. The lightest of the test models, the Wind River binoculars tip the scales at 1.63 pounds. The range of the model is listed as 15 to 850 yards, with a field of view of 31.4 feet at 100 yards.

Because of its smaller size, the Wind River was a little harder to hold in a steady position for readings, and the view was not as clear and sharp as the Bushnell model, members of our test team said. Digital displays are presented in red in the center of the view and are easier to see with a dark background than in bright conditions.

Measurements on our standard ranges, using the tripod, were within two yards at 75 yards, one yard at 100 yards and were on the money at 200 and 400. The farthest distance we could measure was 732 yards and the shortest was 11 yards. Overall, our testers were satisfied with the handling and performance of the Wild River model, with slight reservations about the ability to read the display and the interpupilary adjustment method.

Newcon LRB 7X40 SPD Model 0300152, $550
We tested two models of the Canadian-based Newcon Optik laser range finder binoculars. The first model, the 7X40, has a smooth, hard rubber surface on the bottom that seemed a little slick to our test group. The range finder weighs 2.16 pounds, has an advertised range of 20 to 1,512 yards, with a field of view of 6 degrees at 100 yards. Two immediate observations by our test group about the model was that the thin rubber protective cover for the front lenses consistently flopped into the viewfinder and that the battery cover was inconveniently located between the two front lenses.

The reduced power level, compared with the 8-power versions of the Bushnell and Wind River, was apparent in providing views at any distance, and there seemed to be a slight green tint to the images.

This model also includes a speed detector feature for measuring the speed of moving objects in either miles per hour or kilometers per hour. The speed measuring factor is a nice addition, but did not seem to have many hunting applications, so our group only conducted minimal tests in that mode.

Switching from the different modes required multiple pushing of the mode button and several of our group had problems establishing the range finder on the correct setting. Concerning the range tests, the LRB7X40 produced readings of 72 yards, 98 yards, and 198 yards measured distances. Readings from objects at longer ranges were consistently lower by several yards than the Bushnell and Wind River models.

On the plus side, the LRB 7X40 did record the longest distance to an item, with a reading of 1,120 yards to a power pole. The shortest range that could be recorded was 16 yards.

Newcon LRB 7X50 Model 030742, $750
The big boy of the group, the LRB 7X50 was both larger and heavier than any of the other models, weighing in at 2.86 pounds. Also provided with a flimsy rubber cover for the front lenses, this is the only model that required a screw driver to install or replace its 9-volt battery.

Perhaps because of its weight, our testers noted that if the LRB 7X50 was set down on its top, the mode and power buttons were often engaged and could cause premature battery discharge.

The ridged, hard rubber cover on the binoculars provided a firm grip, although not as comfortable as other models in the test, we thought. Like the other NewCon Optik’s model, the view through the rangefinder was not quite as clear as our testers would have liked, and had the same light green tint.

Range measures were identical to the LRB 7X40 model — 72 yards, 98 yards and 198 yards at the measured distances of 75, 100, and 200 yards. Readings on both models are presented as large, black crosses surrounding a rectangle in the center of the view, with easily discernible measurements.

While the advertised measuring range for the LRB 7X50 model is 20 to 1,512 yards, our testers could only record readings of from 16 to 725 yards. Once again, more reflective targets at the longer ranges may produce better results for consumers.

Neither of the NewCon Optiks models provided as bright or sharp a view as the other range finders in the test group, we thought.

Gun Tests Recommends
• Bushnell Yardage Pro Quest 8X36 Laser Range Finder Binoculars Model 20-0836, $600. Our Pick. Quality features, which were easy to use, and a price that is easy on the wallet earned this package the top marks of our evaluation team.

• Newcon Optik LRB 7X40 Laser Range Finder Binoculars No. 0300152, $550. Conditional Buy. Despite its low price, this unit didn’t offer as clear a view and had more complicated operation than the other test models, we thought.

• Newcon Optik LRB 7X50 SPD Laser Range Finder Binoculars No. 030742, $750. Conditional Buy. Our testers did not like the weight and bulk of this model and gave low marks to both the lack of sharpness of the view and reading display. 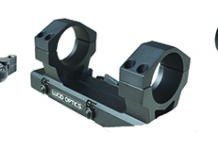 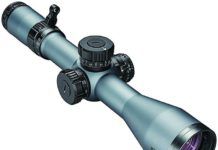 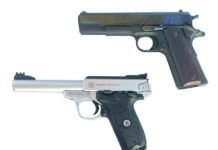