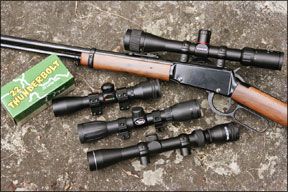 At one time optics for a rimfire rifle meant a scope with a 0.75-inch tube-including objective-and no adjustable magnification. You could also get it with any reticle type you wanted as long as it was a traditional crosshair. You can still purchase these types of scopes, but todays rimfire scopes share a lot in common with centerfire scopes. They come in 1-inch tubes and have adjustable magnification, parallax adjustment, and an assortment of reticle types.

Before we did any range work with the scopes, we performed a shock test by whacking the scope on a wooden bench to determine if a jolt would have an effect. Next, we removed turret covers and froze the scopes in a -4 degree freezer and soaked them in a sink of hot water to see if seals leaked, making the scope susceptible to moisture build up. We then mounted the scopes for a side-by-side test on a platform and looked for resolution, brightness, contrast, parallax, tracking and repeatability. If scopes passed these phases of test, we finally we mounted them on a rifle for range testing. At the range, we looked for tracking by “shooting the box” and point-of-impact change with the variable-powered models by shooting at minimum and maximum power magnifications. We shot from a bench rest at 50 yards at the Fin Fur Feather Club in Chaplin, Connecticut.

As a test platform we used a Henry Repeating Arms Company H001 lever action in 22 LR. The Henry is like many rimfire rifles with a groove built into the receiver to accept Weaver-type rings. The Henry is an inexpensive plinker and small-game stopper. We loaded it with Remingtons Thunderbolt cartridges with a 40-grain bullet and a velocity of 1255 fps. Lets see how these inexpensive scopes could perform on marauding soda cans or help keep the varmint population in check.

The TruGlo came in a clear blister pack with rings already mounted. An Allen wrench was needed to mount the scope on a rifle and adjust the scope in the rings. Included with this fixed-power TruGlo was a set of lens covers with elastic cords. One cover had a clear plastic lens and the other was tinted yellow. These were at best great for storage and transporting but would have little use for shooting. The TruGlos eyepiece was adjustable and lockable with a rubberized outside edge to protect against scope bite, which we didnt think would be an issue with 22 rimfires. There was no way to zero the turrets, but they could be turned by finger.

The TruGlo seemed to withstand the whack-test with no problems. The scope tracked and the windage and elevation turrets rotated with audible clicks that were crisp. The zoomed worked. The freezer-to-sink test, however, was telling. The TruGlo spewed a strand of bubbles from the ocular lens and from both turrets. The bubbles lasted for many minutes. Upon cleaning the lens for the resolution and clarity testing, we brought the scopes outside to a humid 80 degree F. Water was immediately detected in the objective lens and the lens was moist and fogged. Looking through the scope it was obvious the water had an effect on performance. The sight picture had an opaqueness that made it hard to view the target. The screws on the scope rings also started to quickly rust. We stopped testing at this point.

Our Team Said: At first glance the TruGlo seemed a winner. It was compact and had clear sight picture prior to the freezer-sink test, which it failed. Also, our testers disliked that there was no way to zero the turrets and thought this was especially important with a plinker since the rifle would be shared with young shooters and need to be tweaked to provide an optimum shooting experience. Testers noted that they had experience with similar leaking scopes and after the scope dried out, it performed fine. We did revisit the TruGlo after the moisture had dried, but there was residue inside the scope.

Out of the box, the fixed-power BSA sported lens covers similar to the ones shipped with the TruGlo. It also included a lens cleaning cloth and an Allen wrench for mounting. The BSA, unlike the other scopes, was made of plastic. All the other scopes were metal. Turrets could not be zeroed, and to rotate the turrets, the shooter needed a coin or screwdriver. The ocular eyepiece was adjustable and locked with a locking ring. It also had a soft rubber outside edge on the eyepiece.

Even though the scope was made of polymer, it was unfazed after the whack test. Windage and elevation seemed precise, with loud clicks that felt firm and precise. The BSA did leak after the freezer-sink test. A slow trail of bubbles escaped from the eyepiece where it screwed into the tube. At the resolution test there were drops of water and condensation built up in the ocular lens piece of the scope. Sight picture was murky and water drops were visible on the target. We stopped testing the scope at this point.

Our Team Said: Like the TruGlo, testers liked the BSA out of box. It was compact and seemed to have good resolution. The fact the turrets required a tool to adjust was the first negative. The second negative was the water build-up in the scope. Testers noted that old-school 0.75-inch tube scopes also leaked but would eventually dry up and clear. We did check the BSA after the water evaporated, but did not continue testing.

The Tasco was similar to a centerfire rifle scope in that it was longer and heavier. It came with scope rings attached and the requisite yellow/clear elastic lens covers. It also came with a lens-cleaning cloth and an Allen wrench to adjust the Tasco in the rings. The rings required a slotted screwdriver or coin to mount on a firearm. The turrets also needed a coin or screwdriver to adjust windage and elevation, and they could not be zeroed. The turrets looked very similar to the BSAs, and we wondered if they were built by the same off-shore manufacturer. The eyepiece could be adjusted and locked in place. Magnification range was from 3x to 9x power. The power ring was knurled and easy to operate. A small white dot indicated what power the scope was adjusted to. The center crosshairs were fine and we liked that. The duplex portions of the crosshairs were farther from the crosshair intersection, which allowed us to see more of the target. The Simmons, on the other hand, had the thicker duplex portions of the crosshairs closer together.

The Tasco passed the whack test but leaked in the freezer-sink phase. There was, however, no condensation build up or water visible inside the scope. Resolution was crisp and color seemed to be as good as the slightly higher-priced Simmons. The edge of the lens was also clear and sharp. Tracking was ok on paper, as the reticle moved across the grid pattern. We didnt like having to use a tool to rotate windage and elevation. The parallax is set for 50 yards, at closer ranges it was an issue but resolved when looked directly through the eyepiece. The exit pupil was less than half the diameter at 9x compared to the diameter at 3x power. This means at lower light levels and at higher magnification levels, your eye will receive less light. At the range we shot the box, and the box was more rhombus than square. The Tasco came close to returning to zero, but was slightly off.

Our Team Said: This was a larger, heavier scope that some testers felt might tire younger shooters who were shooting offhand. The turrets required a tool for adjustment, and it was easy to go one too many clicks, hence the reason for the less-than-square box. Many felt this scope was easier to mount since it was longer and the balance of the Henry could be managed.

The Simmons was packed in a box like a centerfire scope and included non-see thru lens cap covers for storage and transportation. The included rings were not attached to the scope and required a Phillips screwdriver to mount to the scope and a standard screwdriver to mount to a firearm. The rubber-edged eye ring could be rotated in the eyepiece for more precise focus. Simmons calls it a QTA (Quick Target Acquisition) eyepiece. Magnification range was 3x to 9x power. The magnification ring featured grooves, and it had slightly more resistance that the Tascos ring. Also, the power ranges were indicated on the eyepiece and not on the ring. To see power setting, the shooter needed to flip the rifle left or right to see the setting. Most variable-power scopes have the magnification settings on the ring so it is easy to see the power setting. This threw some testers off. A feature not found on any of the other scopes tested was an adjustable objective lens for parallax, which allowed shooters to adjust the objective to the target distance from 15 yards to 100 yards in mostly 10-yard increments and out to infinity. This helped eliminate parallax. The turrets could be zeroed by loosening three set screws in the knurled knob with an allen wrench. The knurled knobs also made click adjustments uncomplicated since the knobs were easy to grip and turn with fingers. The clicks were the most precise of all scopes tested.

The whack-a-scope portion of the test did not seem to faze the Simmons. Nor did the freezer-to-sink test. The Simmons was the only scope to pass this portion of the testing with no leaking bubbles. The resolution, color and contrast test made it obvious the Simmons had better lens. The tracking of the Simmons was better than the Tasco, and exit pupil diameter was better at higher magnification, meaning more light was transmitted to a shooters eye at higher magnifications. At the firing line the Simmons was the easiest to use, our testers said. The turret clicks were precise, and the box actually looked like a box when we did our part with the trigger.

Our Team Said: The Simmons was the longest and heaviest scope. Youngsters should shoot this scope from a steady rest since some testers felt it might tire younger shooter if shooting offhand. Tester liked the Simmons turrets the best, and the adjustable objective was needed to reduced parallax. Testers liked the quick-focus eyepiece. The power setting seemed a miss with shooters who wanted the power ranges on the ring.