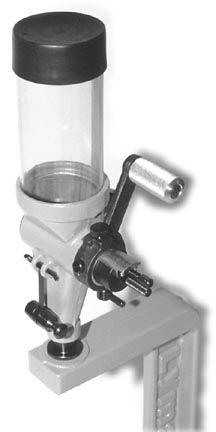 Always in search of that perfect load for our firearms, we can’t be exacting enough about our equipment. And anything that affects how much powder goes into the cases is critical. Proper gunpowder dispensing can not only make the difference between acceptable groups and unwanted flyers, it can mean shooting safely without fear of dangerously high or low charges.

To see how various units stacked up in their ability to throw an accurate, repeatable charge, we looked at four commercial powder measurers: Lyman’s Powder Measure Number 55 ($71.50), Redding’s Model 3BR ($150), the RCBS Uniflow ($77.95), and Lee’s Pro Auto-Disk ($45). Each unit was set up for manual use (not as part of any progressive loading system) and adjusted as indicated in the respective user’s manuals. The amount chosen was about 30 grains, measured to the nearest one-tenth of a grain, using Alliant Red Dot powder. A Dillon D-Terminator electronic weighing scale was utilized to verify the charge weights.

How We Tested
After we had the proper powder charge established for the test powder measure, a charge was dispensed to a case, after zeroing our balance with the empty case. The filled cartridge was then weighed. This was repeated for ten cartridges. Each charge was then determined again, by weighing the full case, emptying it out, and re-weighing the again-empty case. In this manner, two weights were determined for each charge, in order to minimize the 0.1-grain error possible with the scale.

Additionally, linear regression methods to determine “drift,” that is, the tendency for repeated doses to either increase or decrease continually, showed that none of the units had appreciable faults in this respect. Here’s what we thought about the units individually:

Lyman Number 55 Powder Measure
Our recommendation: Buy it. We were able to set it up easily and get consistent charges out of it.

After taking the two or three minutes necessary to set this one up—the easiest of the bunch—we were ready to begin our evaluations. One of the first features we noticed was the set of multiple slides, used to expand or shrink the charge chamber. The three slides have graded levels of sensitivity, allowing the smallest (top) one to have the most motion for a small change in powder volume. Larger gross changes are made with the middle and/or bottom slides. Lyman recommends that the top slide only be used for light pistol loads, the top two slides for rifle charges, and all three for heavy rifle work. Instructions for using each of these combinations are clearly delineated in the manual.

Another feature we liked while we were dispensing powder doses is the knocker assembly. Instead of rapping the thing with our knuckles to make sure that a given charge was delivered in its entirety, a small knocker on the exterior of the drop funnel can be used. This is a helpful convenience that the operator appreciates after a while.

One aspect that we felt was a drawback were the gradations marked on the slides. It’s important to have usable markings on the adjustment device of any powder measure so they can be recorded for future use. Yet those on the bottom slide were very difficult to read, and were nonexistent on the middle slide. This is an inconvenience, in our view.

Where the unit really shines, though, is in repeatedly and reliably delivering a standard amount of gunpowder. We set up the initial delivery amount as 30.1 grains, and delivered ten charges that averaged 30.2 grains, with a relative standard deviation (RSD) of about 0.42 percent. Roughly speaking, this means that we can expect that about 95 percent of the measures under identical conditions will be between 29.8 grains and 30.4 grains. Although three of the four test measurers gave RSDs under 1 percent, which is very good, this one was the best.

Redding Model 3BR
Our recommendation: Don’t Buy It. The Lyman is a better, cheaper unit, in our view. Our first impression of this unit was positive. It seemed sturdy, solid, and simple. This impression eroded quickly, however, as we started to assemble the product for use. We found it inconvenient to remove the tiny reservoir-attaching screws, install the reservoir, and reattach the screws. To make matters worse, the screw holes in the reservoir sides didn’t line up with the screws, and had to be gouged out by hand to assure a proper fit.

Once that hump was passed, however, things brightened up considerably. We particularly liked the design of the barrel screw, used to adjust the powder chamber’s volume. Simple clockwise and counterclockwise turning of the barrel are all that are required to make the necessary adjustments, and the scales were always visible and easy to see. Dispensing itself was also very good. Simple motions of the operating handle were all we needed to provide smooth, even delivery of the powder into our cartridges. The translucent drop tube allowed us to visually monitor the powder’s progress, providing an additional level of in-use comfort.

Uniformity of the delivered measures, although not as impressive as Lyman’s, was nevertheless very good. An RSD of 0.61 percent implies that 95 percent of all measured powder charges under our test conditions (average charge 30.8 grains) would be between 30.3 and 31.2 grains. This is well within most shooters’ limits of acceptability.

RCBS Uniflow
Our recommendation: Don’t Buy It. It falls short in the critical factor of measure consistency.

This one required little assembly, allowing us to get into powder dispensing immediately. Adjusting the unit’s powder charge for delivery was similar in concept to Redding’s model: Simply turn clockwise or counter-clockwise to bring it to the required volume, and the lock nut held it there handily. The scale was easy to read, except that it was clearly visible only when it happened to face the user—or about half the time. We found the actual powder delivery to be smooth and easy.

But this unit’s consistency of measured powder charges came to a slightly less impressive RSD of 0.77 percent. Not terrible, but not as good as the previous two players.

Lee Pro Auto Disk
Our recommendation: Pass on it. We found it to harder to set up and use than the other units.

We didn’t make it very far into the hard-core testing of this item. For starters, we found it to be the most confusing for initial assembly and setup, perhaps because it seems to be designed for a Lee reloading station, and little else. The instruction manual allows for installation on a single station or turret type press and instructs the handloader to then install the spring return lever and spring. But it doesn’t quite say how to do that. For non-Lee progressive presses, the guide states, “installation on other brands require [sic] some ingenuity on your part to find a good attachment.”

Once we got it set up and ready to operate, we faced the next hurdle. Instead of allowing for any specific volume within some upper and lower limits, the user must select which disk and cavity to use for a particular powder charge. If we want to measure 30 grains of Alliant Red Dot powder, we look in their chart under “Alliant” and then “Red Dot.” This gives us a VMD (Volume Measuring Density) of 0.1413. Multiply our 30 grains by the VMD, to get 4.24. Finding that value on the chart leads us to a cavity labeled “.61.”

Going through all that is bad enough. But when we measure out a load from this cavity, we end up with a charge weighing less than 4 grains.

Even allowing for gross errors on our part, this is a problematic system, for two reasons. First, the user is constrained to those particular volumes allowed by the pre-calibrated disk cavities in their system. Fine-tuning of loads is impossible, without painstakingly adding or removing powder for each cartridge while using a weighing scale.

Second, the company specifies that “powder densities can vary more than 16 percent and still be considered within tolerance by the powder manufacturer.” If so, then a handloader can end up with charges varying widely from his or her expectations. And, when he checks the correct weight occasionally and finds it wrong, how will he adjust the powder volume delivery? Any additional adjustments will involve disk changes, more weighings, and more labor.

Gun Tests Recommends
Getting a consistent powder charge in your cartridges should be as simple, repeatable, and easy as possible. But only two units we tested lived up to that standard, and one was much less expensive:

Lyman Number 55 Powder Measure, $71.50. Buy It. You won’t go wrong with this one. It gives consistent delivery of measured charges, sets up easily, adjusts well, and operates smoothly.

Redding Model 3BR, $150. Don’t Buy It. This unit tested well enough, with the exception of some difficulty in initial setup, and we found it to be nearly as consistent as the Lyman and even easier to adjust and operate. All this, however, is offset by the high price.

RCBS Uniflow, $77.95. Don’t Buy It. Although setup, adjustability, and operation were all good here, it falls short in the critical category of measure consistency. 8 Lee Pro Auto Disk, $45. Don’t Buy It. We found this unit confusing to set up and operate, and we ended up with measures that were way off base.