New and improved are common phrases bounced around in the shotgun market as a promotional effort meant to inspire shooters into rushing through the doors of their nearest firearms dealer with cash in hand. Sometimes the advertising rings true, and other times the buyer is left disappointed. With one of the latest new and improved offerings – the Benelli Ultra Light model billed as the lightest semiautomatic shotgun on the market – the Gun Tests team followed the example of the great state of Missouri and asked the Benelli to Show Me how good it was.
We selected a 28-gauge version of the Ultra Light with a price tag of $1,760 and matched the new kid on the block against a 28-gauge version of one of the most venerable semiautomatics in the country – a used Remington Model 1100 picked up for $1,300.

In addition to the price difference, the two 28s are poles apart in offering a sub-gauge platform for wingshooting and busting clay targets. The Benelli is more than 2 pounds lighter than the Remington; features an Inertia Recoil system rather than the gas-operated Model 1100 to reduce shoulder shock; and boasts of a new cryogenically treated barrel and chokes for cleaner shooting and tighter patterns.

In support of the Remington are more than 40 years of service to 28-gauge shooters on both clay target ranges and dove or quail fields as the best-selling semiautomatic in America. More than 4 million of the Model 1100s have been sold – a testament to the shotguns popularity.

We put the two shotguns through their paces on some South Texas mourning dove hunts and a few sessions of sporting clays to see how the youngster fared against the veteran, and to see how the Benelli lived up to its new and improved advertising.

We patterned each of the shotguns with Improved Cylinder and Modified chokes and fired the Winchester ammunition at a 30-inch circle set up 30 yards downrange. The results were as advertised by Benelli, with the Ultra Light producing denser, more uniform pellet strikes with both chokes.

With both chokes, the Benelli punched 233 holes in the 30-inch pattern (the average number of pellets in the Winchester shells was 270) and the improved cylinder pattern had only two 3-inch holes between hits. The modified choke left only four 3-inch holes, mainly in the outside of the circle with a very solid pattern in the 20-inch center of the target. A very acceptable 50-50 pattern, with an equal number of hits above and below the center of the target, was produced by both chokes.

In the Remington testing, the improved cylinder choke also produced 233 hits, but with six 3-inch holes all over the pattern; and the modified results were even worse with 249 hits and seven 3-inch holes. On the plus side, the Remington also spread out the hits in a 50-50 pattern.

Concerning the recoil factor, no semiautomatic 28 gauge worth its salt will smack the shooters shoulder with the authority of a larger 20 gauge or 12 gauge. Both of these shotguns were a pleasure to shoot, with little felt recoil from either model. At best, the recoil factor was a tie between the new lightweight Benelli and the heavier veteran Remington.

With this knowledge and confirmation of the Benellis advertising under our belts, we took the two 28s into the field for some quality time with birds and clays. Here is what we found on the ranges:

Benelli Ultra Light 28 gauge, $1760
At first glance, the Ultra Light almost appears as a miniature version of a sporting shotgun with its slim, short forearm, 26-inch barrel and heft of only 4.9 pounds. It seems designed for youngsters and small women rather than for the lumbering former football linebackers or arm-chair quarterbacks normally found in the dove fields and on clay target courses.

We quickly began to appreciate the feel and balance of the Benelli, which follows the tradition of similar models produced by the Italian company during the past few years. While it is very light, the balance between the hands is very good and we encountered no problems swinging through targets.

As veteran wingshooters and clay busters know, a light or short shotgun can often result in a whippy or choppy swing through targets, rather than the smooth glide that produces solid hits on birds and clays. That was not the case with the Benelli, and we had no problems center-punching both winged and clay targets.

Only one-half inch shorter than the Remington at 47 inches, the length of pull on the Benelli was 14.25 inches and the drop at the comb was 1.5 inches with a drop at the heel of 2.5 inches. Everyone from the smaller members of our test team to the big bruisers agreed that the comfort factor was good and the handling ability of the Benelli was quite surprising.

The trigger pull was a little disappointing, breaking at 6.5 pounds, with a lighter touch of about 5 pounds preferred by most shooters. Unlike with its larger cousin – the 12 gauge – less recoil from a 28-gauge shell makes the easier trigger touch off not as important a factor.

We found that hits on birds and on clays were very solid, reinforcing what we learned at the patterning range and the balance of the Benelli eliminated any possible whipping of the lightweight shotgun through targets. Unlike with the Remington, we encountered no functioning problems with any of the ammunition.

Following the pattern of other Benelli semiautomatics like the Super Sport and the Cordoba models introduced in previous years, the Ultra Light utilizes an Inertia Driven system that features only three moving parts – the bolt body, the inertia spring, and the rotating bolt head.

This system is very effective, and with the cryogenically treated barrel and chokes, did result in a cleaner, more effective way to send lead down range. Score another one for the promotion department.

Our Team Said: The only downside we could find with the Benelli was the price tag, but in the end the performance factor of the tiny 28 justified the potential hit to the buyers wallet.

Remington Model 1100 Sporting 28 Gauge, $1300
Weighing just a touch over 7 pounds, this Remington has the feel of its 12-gauge cousin. For those who like a heavier firearm to help smooth out their swing, that is a plus. For those who want to lighten their load in the field and dont feel like lifting a 7-pound weight 100 times or more shooting doves, that is a minus.

As noted earlier, the Model 1100 is the best-selling semiautomatic shotgun in U.S. history with more than 4 million models produced; and holds the record for the most shells fired out of a semiautomatic shotgun without malfunction, cleaning or parts breakage. That record of more than 24,000 rounds was set in 1978 by a shooter using the Light 20 version.

The Model 1100 has fans spread out all across the country, both in the field and on clay target ranges, including several members of our test team. Those personal preferences were put aside to ensure fair testing.

Putting the tape measure to the Model 1100, we found it had an overall length of 47.5 inches, with a 28-inch barrel and a length of pull of 137⁄8 inches. The drop at the comb was 15⁄8 inches and the drop at the heel was 23⁄8 inches. Other than the minor difference in length and major difference in weight, we deemed the handling ability of the Remington to be equally satisfying as the Benelli.

Our first surprise when using the Remington on doves was when we encountered functioning problems with about two shots in every box of shells. Checking the spent and dented but unfired shells, we found the Remingtons firing pin was not producing center hits on the primers of both the Rio and B&P ammunition.

A trip to our friendly neighborhood gunsmith resulted in a finding that while the firing pin was not broken as we suspected, the firing pin spring was malformed and had to be reversed to correct the problem. Since this was a used firearm, we suspect this problem was the result of inadequate care and treatment. A word to the wise – any used firearm would probably benefit from a little quality time with a gunsmith.

Our Team Said: We were happy with the overall handling ability of the Remington and with its 5.5-pound trigger pull. When we were able to reliably touch off a shot, the Model 1100 lived up to its reputation as a smooth, effective tool for both birds and clays. On the cleaning bench, the gas-operated Remington did have quite a bit more fouling and powder residue on the magazine tube than the Benelli. This is a factor with all gas-operated shotguns and a wise shooter will make a regular routine of stripping down and cleaning his firearm after any trip to the field or clay range. Disassembly and reassembly of the Remington was not quite as easy as with the Benelli Ultra Light, but we did not feel the process was so complicated as to downgrade the reliable old guy of the shooting world. 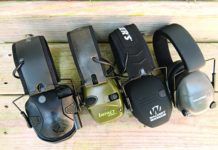