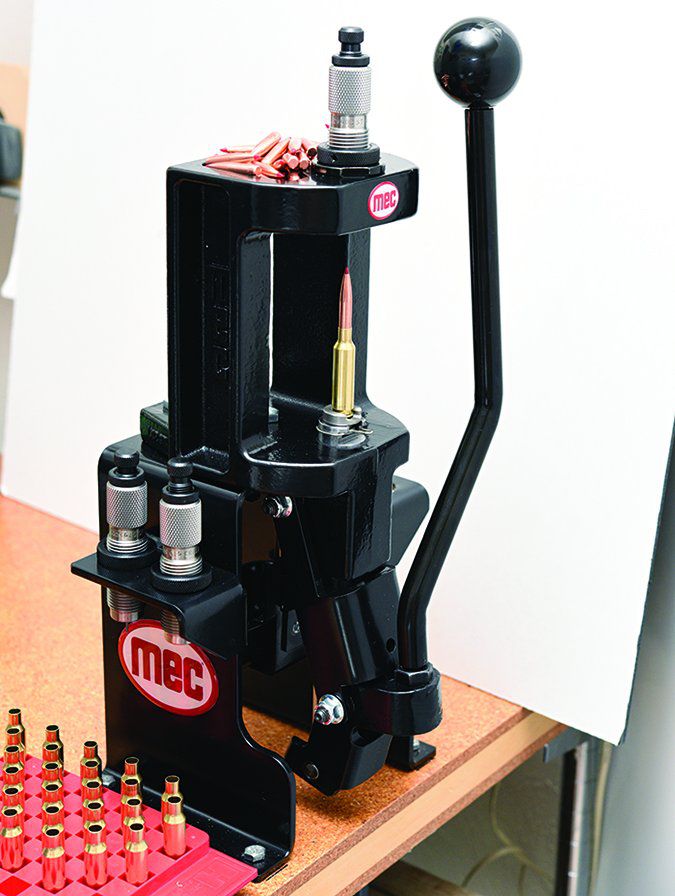 The Mayville Engineering Company, better known as MEC, is probably the most famous name in reloading shotgun ammunition. The last MEC press one of our staffers purchased was a multi-stage motor-driven progressive press tasked with keeping up with his voracious appetite for competing in the world of trapshooting. So when MEC, active in the shooting sports for more than 60 years, decided to enter the metallic reloading market, we thought it was a good time to begin reloading the 6.5 Creedmoor brass left behind after our tests of the Ruger Precision Rifle. MEC’s new loader is a single-stage hand-driven press called the Marksman.

Not to be confused with blue, red, or green reloading presses the jet-black MEC Marksman was fashioned from ductile cast iron. Suitable for loading calibers ranging from 22 Hornet to 416 Rigby, the $225 Marksman can be mounted directly to a bench or seated atop MEC’s matching base ($46). At first, we tried mounting the press directly to our bench, but found that the matching black base with the red MEC logo provided a substantial upgrade in terms of strength and versatility in terms of where we could drill holes in our bench. Raising the press from the bench also served to provide better access for the operator. Three heavy 5/16-inch bolts and Nyloc self-locking nuts were supplied to turn the press and mount into one solid unit. Quarter-inch screws with wing nuts were supplied for attaching the unit to the bench.

Top to bottom there were several features we liked about the MEC Marksman press. A tray was built in at the top of the press, so we were able to place about 40 or more 143-grain 264-caliber rifle bullets. A removable tray was cleverly integrated to catch spent primers that dropped down through the ram and out a “trapdoor,” taking dirt and debris away with it. The tip of the ram was fit with a shell-plate retainer that allowed for some movement. This was on purpose, to allow the shell to compensate for any misalignment that could translate into damaging the brass casings.

The 7/8-14 threads machined into the crown of the press were precise, beginning just below an inviting bevel, ready to help clumsy fingers start the dies and prevent cross threading. The mount also provided a pair of holes on each side to support dies in waiting. Using a single-stage press requires the dies to be changed out often, and these keeper holes served not only to store the dies within reach but also away from the bench top where they could come in contact with dirt and debris.

The drive handle was offset from the unit by way of about a 30-degree bend in the control arm and topped with meticulously machined synthetic ball. The arm could be locked down anywhere within a 180-degree arc to accommodate both right and left-handed operators without being removed from the machine. The advantage here has more to do with available space than which of the operator’s hands are stronger. The smooth action of the Marksman provided enough leverage so that, in our view, strength was not really a factor. We think this was a big plus if your bench, like ours, was crowded with other loading presses or case-processing machinery that dictates how much clearance is available to either side. Changing the position of the control arm did not require removing the arm or any other part of the press. We just loosened the jam nut and rotated the arm.

Given that 6.5 Creedmoor is booming in popularity and recipes and components are still somewhat limited, we ended up trying a number of combinations, such as a variety of bullet length, primers, etc. On top of that we used our test session to train a newcomer to reloading, so the MEC Marksman was treated to a workout.

Our Team Said: The MEC Marksman press proved to be as easy to use as it was handsome. Buying the mount was definitely worth the money. The side saddles provided to hold “dies in waiting” sped things up, and so did the precision threading. If we could ask for any change at all, it would be for a more secure lockdown of the control arm. As it is, the single jam nut does an adequate job of holding the control arm in the desired position, and our only incident of forcing the arm to rotate out of position was due to a cartridge case that had not been properly lubricated before sizing. Then again, a second jam nut or lock washer working against a stop would probably eliminate the possibility of it coming loose entirely.