Previously, we have criticized the Glock 22 pistol because, in our opinion, it was more prone to muzzle flip, was less comfortable, and was harder to control than other .40-caliber pistols, especially ones with steel frames. As a result, we would recommend the use of Winchester Ranger ammunition in the Glock 22 to minimize this characteristic.

We shot the .45 ACP bullets in a Smith & Wesson Model 4586, a single-stack semi-auto in double action only. Both the Federal and Winchester rounds employ 230-grain hollowpoints, and we measured velocity and muzzle energy to be nearly identical. But the accuracy of this gun improved by 1 full inch on average per five shot group measured from center to center when firing the Winchester Ranger RA45Ts. Felt recoil was closer to that of military (230-grain lead) ball ammo than that of a special defense round.

Gun Tests Recommends
The final tally on our scorecard shows that Winchester’s Ranger ammunition is superior in .45 ACP and .40 S&W when fired in guns commonly used by the FBI. We’d call it a draw between Hydra-Shok vs. Ranger in .357 SIG. 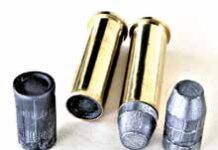