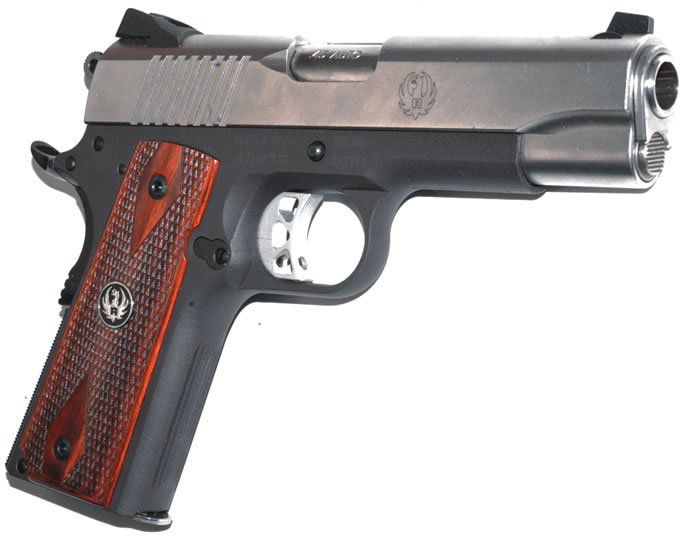 Colt still makes the Lightweight Commander (O4860XSE, $1104), but no longer makes one of our favorite carry guns, the CCO, or Colt Concealed Officer’s model. We thought this Ruger looked enough like the Colt CCO that a comparison was in order. In this first-look report, we take a good look at the new Ruger and briefly see how it stacks up to a custom CCO on hand.

We shot the Ruger with 230-grain FMJ “hardball” by Black Hills and Winchester, Winchester’s 200-grain BEB, and with Federal 185-grain JHP Hi-Shok. We tried a few rounds of Cor-Bon 185-grain JHP, but found the recoil to be much too fierce. Here’s what we found from our first look at the new Ruger.

The Ruger came with slim, wood grip panels, excellent Novak sights, a Commander-style hammer, beavertail extension, and a decent trigger right out of the box. The black-anodized frame fit the slide very snugly. There was no side-to-side play at all, nor was there any apparent movement of the barrel at the muzzle nor at the breech within the slide. Other things we liked included the deburring done almost everywhere — Ruger missed a few spots — the extended, single-side thumb safety, and the lack of a firing-pin-blocking mechanism, which can play hob with the trigger pull. Contrary to website claims, the gun did not come with a hard case, but instead had a zippered soft-carry case, along with two 7-round magazines.

The edge breaking, or dehorning, was outstanding by comparison to much of today’s 1911 crop. The bottom edge of the slide, the front of it and the barrel bushing, and even the slide stop had beveled edges. Missing this feature were the rear edge of the exit port and the front of the frame extension. The magazine well was beveled as well.

The wood quality of the slim grips was excellent, and we liked the ultra-slim profile these gave the gun. They make for slightly better concealment and give the gun a pointing quality that many appreciate.

The Ruger has vertical serrations on the front strap. We believe it needs checkering there, like it already has on the mainspring housing. Half the cuts have already been made, so a quick job with a checkering file would give us what we want. There are fluids to reblacken the aluminum, so it would not be necessary to leave the checkering in the white, as it is on the CCO.

The big difference between the CCO and the Ruger is the grip length. The Ruger, like the Colt Commander, has a full-length grip. The CCO has a shortened grip, like that of the Colt Officer’s ACP model, but has the Commander-length slide. This theoretically gives the full-length grip a one-round advantage, but our CCO holds the same seven rounds as the Ruger. Of course, one can get 8-round mags for the full-length gun, but full-length magazines also work perfectly in the CCO.

We appreciate that Ruger has concealed the “Read instruction manual…” warning by putting it in small letters beneath the forward part of the frame. This leaves the slide tastefully marked with only the Ruger name over “Made in USA” on the left side of the slide, and only the Ruger logo on the right. There are no other markings or blemishes on the slide. The slide is matte stainless, essentially a low-glare finish. The frame is dull-black anodized aluminum. The two magazines are shiny nickel-plated ones, which does not offend. Ruger’s version of the Videki trigger had its stop properly set, and a dull-nickel finish. The fixed Novak sights are dovetailed, and provide an excellent sight picture with three white dots. The Ruger even had a one-side-only extended thumb safety, something many cherish. In short, there is nothing about this gun’s appearance we did not like.

On the range, the Ruger put its shots with hardball essentially dead center of point of aim at 15 yards. One cannot ask for more than that. Even better, the Ruger averaged 1.7 inches for five shots from our bench at 15 yards. It did about the same with Federal’s Hi-Shok, though they landed slightly higher on the target. Winchester’s BEB made a group of 1.1 inches, and then we discovered the grips had come loose. All four Allen screws needed a good bit of snugging up. There were no other problems with the gun, except for one picky item that we encountered.

In our shooting over a rest from the bench, our thumb bounced off the safety and flipped the safety to the On position. In normal shooting, this never happened. The picky shooter could remove the safety and slightly deepen the retention hole with an appropriate tool.

We took the gun apart to inspect another of Ruger’s tricks. One of the complaints heard now and then about aluminum-frame 45s is the wear or battering they can receive from extended us. Ruger has inserted a polished titanium plate, which becomes the feed ramp to prevent that possibility.

Another clever trick is the plunger tube is integral with the frame. That’s neat, we thought. These are commonly staked or riveted in place, and often come loose. This one never will. The plunger tube holds the spring and stops for the safety and slide stop. The recoil spring was straightforward, no full-length guide rod that requires tools to take apart. It also simplifies thumb-index-finger press checking, which those of us who were brought up on basic IPSC several decades ago still utilize. Finally, we noted the magazine release is somewhat higher out of the frame than commonly seen. It is also checkered, something the owner of the CCO did to his gun, to improve traction for quick reloading. We could not seriously fault the new Ruger lightweight 45. It looked really good to us, and performed extremely well. There was not really much we would do to this one to satisfy our picky selves to make it ready for serious carry.

In contrast, when we first encountered the Colt CCO, it had quite a few things we didn’t like, starting with the wrap-around rubber grips. They went instantly, replaced with Kim Ahrends custom wood panels. While the original rubber grips with their finger grooves would have helped keep a good grip on the light gun from recoil, with the wood panels on it we found it necessary to add checkering to the front strap. That’s why we know the Ruger will need that too, because the CCO and the new Ruger are the same weight, 26.0 ounces for the CCO and 26.3 for the Ruger. As noted, the CCO’s magazine release was serrated, not checkered like the Ruger’s. The CCO’s finish was basically identical to the Ruger, though the Colt’s slide has become shiny on one side from daily carry for two decades. But none of the sharp edges were knocked off, and it gouged our Bachman Slide holster badly. We took a file to it and dulled the now-shiny bits with a simple etching solution. Its ejection port had the same sharp edges as the Ruger’s. The Colt didn’t have a relieved magazine well either, so we did that with a file. The Ruger’s is opened. The Colt CCO had a trigger that needed work, which we had the Robar Companies’ Robbie Barrkman do for us, and despite its plunger-type firing pin lock, the CCO has a better trigger pull than the factory Ruger setup. Robbie also put his NP3 finish on the CCO’s innards to keep the many formerly blued parts of the gun from rusting. The CCO had a raised panel on top of the slide that we thought was shiny, so we used a fine checkering file to dull it. And of course, the CCO has been engraved.

Our Team Said: We note that many of the things we did to the CCO would also have to be done (to satisfy us) to the LW Colt Commander, which is still available. That custom work would add $200 to the Colt’s cost. With the CCO having become rare and in demand, a less-costly carry gun might be in the offing for the CCO’s owner. If that happens, his new carry gun will be this Ruger. With excellent accuracy, perfect function, easily carried weight, great sights and trigger, there’s nothing to not like.