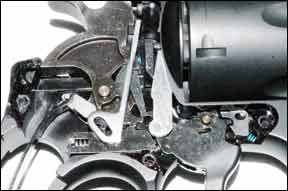 After reading the test of .410-bore shotshells adjacent, shooters may wonder what guns are good choices to shoot the small-gauge self-defense rounds. While we can’t attest to how a given gun will work with a given shell, we can recommend some firearms that generally suit the .410 shotshell in home-defense situations.

About a year ago, Ray Ordorica compared two handguns chambered for the .410 shotshell, the S&W Governor 45 ACP, 45 LC, 410/2.5-inch, $679; and the Taurus Judge Model 4510TKR-3BUL 45 LC/410 2.5-inch, $620. We learned back then that these handguns performed better with smaller shot. Ray first patterned the Gov at 3 yards, which gave a pattern with Winchester Super-X No. 7.5 shot that fit onto a sheet of 8.5-inch x 11-inch paper. At 5 yards from the muzzle, the pattern with the Governor spread to about 18 inches. This was far superior to what we got with shot loads from the Judge, he reported, which would spread to about a foot at only 3 feet. The same held true with the #4 shot. The Governor’s pattern slightly overlapped a sheet of paper with a spotty pattern fired from 9 feet, but at that same range the Judge barely struck the paper. At 15 feet, the pattern differences were astounding. The Smith Governor put all its shot into a 17-inch circle. The Judge put its shot into a 34-inch circle, twice the diameter. The Judge’s pattern had many holes, but the Governor’s pattern was even, and quite impressive. The shotshell results very much favored the Smith & Wesson.

With 000 buck from 20 feet, the results from both guns were spotty. He concluded the maximum range for 000 buck is about 20 feet.

Our Team Said: The Governor earned a Grade: A mark, followed closely by the Taurus with a B+.

More on the Judge
An October 2009 Special Report (that followed up an August 2009 article on the Judge) focused on patterning the Taurus Judge with Nos. 6 and 7.5 shot and with buckshot. The first test of the popular Taurus Judge used No. 4 shot. Using No. 6 and No. 7.5 shot, the pattern density was best with the smallest shot, which had very little of the noted doughnut shape observed with No. 4s. Patterns with No. 7.5s were slightly tighter than with No. 6s. Specifically, at 15 feet they were 28 and 32 inches, respectively.

We obtained what are perhaps the most interesting results with the use of three-pellet buckshot, by both Winchester and Sellier & Bellot. We also got some Russian five-pellet loads, but they were 2.75 inches long, and could not be fired in our 2.5-inch-chamber Judge. We first tried the S&B loads at 6 feet. To our surprise we got a 3-inch pattern. Moving back to 15 feet, the three pellets had a spread of only 4 inches. At 20 feet they averaged just under 5 inches.

Our Team Said: We noted a story online that declared the Judge to be a shotgun in your pocket. As we found out, nothing could be further from the truth. We shot the Judge at 6 feet and got a 16-inch pattern. At the same distance a .410 shotgun with slight choke put all the load into just 4 inches.

A Lever-Action Choice
One of the most fun firearms we’ve ever tested with the .410 shell was the now-discontinued Winchester 9410 lever-action shotgun. The 9410 adapted the Model 94 rifle lever action into a shotgun that can handle 2.5-inch .410 ammunition reliably. The Winchester 9410 Traditional .410 No. 514006056 was introduced in 2001 and came in six offerings through 2006. We tested the 24-inch-barrel Traditional model without Invector chokes.

The gun’s list of features included the ACE system (Angle Controlled Eject), an extractor/ejector design that removes 2.5-inch shotgun shells positively. We were able to “Rifleman” the action two or three rounds, then creep the lever forward and see the rifle eject light target loads, bird shot loads and rifled slugs. The full-length tubular magazine held nine shots. Its overall length was 42.0 inches, with a barrel length of 24.0 inches. The length of pull was 13.5 inches. Unloaded, the gun weighed 6.8 pounds.

We shot it with a variety of test rounds, including Winchester Game & Field Load X414, a hunting load with a half-ounce of No. 6 shot and a maximum dram equivalent of powder. It chronographed around 1230 fps in the Winchester lever action. Remington’s Premier STS S410 load moved along at 1200 fps. It had a half-ounce charge of No 9s, also propelled by the maximum dram equivalent charge. A better self-defense choice was Federal’s F412RS .410 slug, a quarter-ounce hollow point (109 grains).

Our Team Said: We suggested buying one.

Cruising With a Mossberg Pump
We recently began retesting a gun from March 2001, the Mossberg 410 Cruiser No. 50455. We bought one at GunAuction.com for $250, with an eye toward using it for home defense and possibly car defense. For some people, this easy-to-handle pump-action .410 shotgun with pistol grip might be a versatile self-defense alternative to a light rifle or handgun. Also, the Cruiser is compact enough to fit inside the door pocket of some larger pickup trucks.

It weighed 5 pounds and measures just 29.5 inches in overall length. Chambered for 3-inch shells, the barrel was 18.5 inches long, and the tubular magazine holds six shots. It has a Cylinder bore choke and polymer pistol grip and forend. MSRP is $434. We’re impressed with the Cruiser because it compares favorably to other guns used in self-defense situations, plus it costs a lot less than most handguns or rifles.

How did the .410 Cruiser shoot? We patterned all the loads at 10 yards, but we were mainly checking functionality, and came across a problem. We had consistent failures to eject and feed with the 3-inch shells, but of the two, the Federal was much worse. We could barely get that round to cycle. It seemed like the gun was dropping the fired hulls back into the action when we moved the forend rapidly.

At 10 yards, the birdshot rounds produced more intense patterns than the buckshot rounds, but as Bob Campbell notes in the nearby ammo comparison piece, for self-defense, buckshot and slugs are the way to go. Patterns out to 10 yards with the buckshot were tight and would be very effective in the hallway of a house or apartment.

Mossberg’s design includes a top-mounted safety and grooved top strap, which helped accuracy with slugs. We could pick out the top of the bead at 6 o’clock on a target and use the grooves atop the receiver to fine-tune alignment. The Cruiser’s smooth 5.5-pound trigger broke cleanly and always when we expected it.

Our Team Said: If you want a packable, powerful self-defense gun that nearly everyone in the family can handle, we think the .410 Mossberg Cruiser is a bargain. One staffer got a .410 Cruiser for his wife and has it loaded with 2.5-inch 000 shells. It delivers three .36-caliber pellets at 1200 fps, yet recoil is relatively mild. Another friend of the magazine bought a .410 cruiser for his 79-year-old mother. Just check to make sure the ammo you’re depending on cycles smoothly in the Cruiser, and we think you’ll see the gun is light enough, easy enough, and simple enough to operate for nearly anyone.