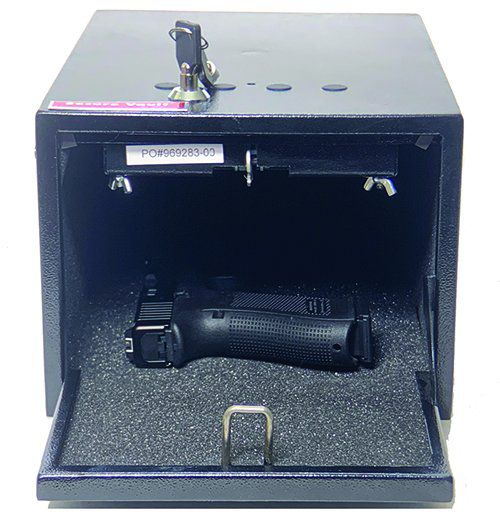 Part of owning a firearm is being responsible for the care and storage of it while not in use. Safely storing firearms in secure lockers or safes is important, especially for those with children or anyone not familiar with gun handling living in the home. While we can all dream of having a 50-gun safe bolted to the floor, some situations call for a smaller, simpler option. The safes in this test were chosen with size in mind for safe storage and access control when space and portability are paramount. These four safes are great examples of the various options for storage and transportation available. We encourage everyone to store firearms in a safe and responsible way, and hope these reviews point you in the direction of the storage option that is right for you.

The Boyt Secure Vault is by far the largest of the safes acquired from Brownells, and our first impressions of it were good. Measuring 13 by 8.5 by 6.25 inches externally and 12 by 8 by 6 inches internally, there is plenty of room for a full-size pistol, a spare magazine or two, and a flashlight, with room to spare for a folding knife, if you want one. The four-button combination allows for quick access without franticly fumbling with a key. But two keys are provided for access as well.

The body’s 15-gauge steel construction and a spring-assisted door make for a solid look and feel, with clean welds and a good-looking gloss finish. Boyt has included a tamper alarm (for three consecutive incorrect code attempts) that triggers a constant beep alarm that is only turned off when the safe is opened with the key, the batteries removed, and the unit reset by leaving it without power for 60 minutes.

There are four holes on the bottom to mount the safe, and the design meets the California DOJ rules for safe gun storage. A feature we are particularly keen on is the 9-volt jump option on the side for when the batteries die. This allows you to power the safe with a 9-volt battery on two touch points to use the code when the batteries are dead.

We liked this safe from the outset, but the more we used it, the more we had problems with the design and function. First, if a battery comes loose, which can happen if the covers are not completely clipped in, or the batteries die, the safe forgets its programmed code and goes back to the manufacturer default code, so don’t lose the instructions.

Speaking of batteries, buy stock in Duracell now because the safe runs on eight AA batteries.

Consistent use for our writers with larger hands, or those who filled up the safe, resulted in scratches and scrapes because the top cover for the latch mechanism and battery unit is held on with wing nuts. While the door does open a full 90 degrees, the two wing nuts at the front and one in the rear were still a nuisance, cutting down the 6-inch internal space to just 3.75 inches at the door. When intentionally avoiding the wing nuts, we would occasionally hit the 1.375-inch-tall latch hook on the door.

Our Team Said: We weren’t thrilled with frequently reprogramming the Secure Vault or scratching ourselves on the rough edges, but given its size, for the price it is a solid option for quick-access vaults.

The GunVault NanoVault is the smallest of the safes in this test, measuring a skinny 9.5 by 6.5 by 1.75 inches externally and 7.5 by 6.25 by 1.5 inches internally. The 2-inch loss in length is due to the hook on the latch being on the inside of the catch, taking up more interior room than if reversed.

The use of 18-gauge steel makes this not as sturdy, but much lighter for portability, and the powdercoat finish should hold up well over time. There are two holes for mounting if needed, but there are better options for a semi-permanent safe because mounting is not recommended by the manufacturer. The NanoVault does come with a 3-foot-long steel cable to lock it to or around an immovable object, again enhancing the security-on-the-go options. The thin design does lend itself well to fitting in bags, briefcases, under seats, in drawers and glove boxes, but the clamshell top is not spring assisted, so it will take both hands and more space to open.

The NanoVault is TSA approved for checked baggage, so far as to be used as the demo in the agency’s “Travel Tips: Traveling with Firearms” video, so it’s a great option for those who fly with firearms. While its small size is its best attribute, it is also its biggest drawback. Fitting a full-size pistol in it is tough. By placing the grip along the hinge with the barrel to the side of the latch, we were able to fit a full-size 1911 in the NanoVault, though we did have to apply pressure while locking and unlocking because the pistols grips were too thick to fit without completely compressing the foam inserts. While annoying, it does mean you won’t have to add padding to the sides, as the pistol will not move when traveling. Our compact FNP fit lengthwise, but it had the same issue with thickness. It wasn’t until we got into our subcompacts that opening and closing the safe without pressure was an option. The NanoVault is not California DOJ approved, so once you arrive in the state, you will need to find another security option.

Our Team Said: Weighing in at just 3 pounds, the NanoVault is supremely suited for safe storage while traveling with a smaller pistol, although we would go a different route if you are looking for anything more than security on the go.

The Liberty HD-90 is well sized at 10.8 by 8.3 by 2.5 inches externally and 10.6 by 7.1 by 1.3 inches internally. Using 18-gauge steel, this safe weighs in at 5.1 pounds according to the manufacturer, but our scales showed a slimmer 3.9 pounds. The extra pounds compared to the NanoVault are more to haul around while traveling, but it does provide enough room to comfortably fit a full-size 1911 and a couple of magazines. The thin foam padding covers the top, bottom and half of the hinge side, so you may want to add more to the sides to prevent scratches and scuffs to your pistols’ finish while moving about. Anti-pry security is built into each side, and a 3.5-foot steel cable is included to lock the safe to any secure object when traveling. The HD-90 is both TSA and California DOJ approved, so it makes for a great travel safe, though its larger size makes packing it a little more difficult. Still thin enough to fit in a drawer or under a car seat, we did have issues fitting it in gloveboxes and smaller bags and briefcases. Liberty includes two screws for mounting using the pre-drilled holes in the bottom and rubber feet on each corner to help keep it in one place. The clamshell lid is not spring assisted but does run the hinge on the long side, requiring less overhead space to open.

Our Team Said: Lack of padding aside, we like the HD-90 for both a travel safe and a reliable desk drawer or bedside safe. Liberty also offers the same-size safe with a fingerprint scanner for a few hundred dollars more.

The Hornady RFID RAPiD Safe is great for security with quick access. The exterior measures 10.7 by 8.7 by 2.9 inches, slim for an electronic RFID safe, while the internal size is 7.0 by 7.7 by 2.2 inches. Those internal measurements are at its widest points without any padding, so keep that in mind when thinking about what pistols to store. Hornady states it fits many 4-inch-barrel pistols and 2-inch revolvers, and we didn’t have trouble with those revolvers. But our 4-inch pistols made contact with the hinge and front housing, so be sure to measure first. Placing the pistol sideways helped it fit better, but it also made reaching in for it more difficult, nearly impossible when the safe was placed in a drawer, and obnoxious in a glovebox.

The access issue is not solely related to the spacing issues; it is also due to the opening space, or lack thereof. The narrowest point at the mouth of the safe is a mere 3.5 inches from the plastic computer housing to the lid lock catch on each side. This choke point makes reaching in from the side an easy way to scratch up your hand or pistol. The smooth finish and polished edges make scratches less frequent than some others, but in a rush we still managed to gouge ourselves and our pistols more than once. The lid can be opened to a completely flat 180 degrees for mounting and plugging in the DC power cable by releasing the lid catch in the back corners. Hornady supplies RFID options of a key fob, wrist band, and two stickers, as well as two barrel keys to open the safe with your choice of devices. To open the safe with the provided RFID options is simple and quick, but each has to be programmed before it will work.

Programming is simple: just press the programming button on the inside of the safe then hold the device to the RFID pad/button on top of the safe. Once programmed, that device will unlock the safe when placed within three-quarters of an inch of the RFID pad. The RFID unlock takes less than one second to read and open the safe. We used all three RFID options many times, and it always opened quickly. When plugged in to a wall outlet using the DC power supply, simply placing a programmed RFID chip in range would open the safe, while on batteries alone you must press the RFID pad to turn on the sensor. The LED indicator on the RFID pad flashes red when open and solid green when locked; the green LED turns off after 10 seconds using batteries but stays on when plugged into power.

The door is spring assisted and opens with enough force to wobble the safe if not screwed down using the four mount holes on the bottom. Hornady also provides a heavy-duty cable and lug to lock the safe to something. The lug slides into a notch on the back of either side and is looped through the cable on one end. The RAPiD Safe 2600 is both TSA and California compliant, so travel with it is welcomed, although since it uses a thicker 14-gauge steel, it does weigh in at a hefty 6.5 pounds, so add that into your checked-bag weight.

Our Team Said: Despite the small opening and overall storage space, we like what the RAPiD Safe 2600 has to offer for security with speedy access, but we would recommend the 2-inch-longer 2700 model or two 1911-sized 4800 model for larger storage options if travel and mobility aren’t paramount.