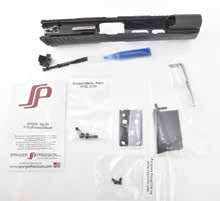 The secret to shooting a handgun correctly has been boiled down to three words — Front Sight, Press. Anyone can line up the sights correctly. Anyone can activate a trigger. But can you line up the sights and then activate the trigger so that the alignment of the sights is not disturbed until the bullet leaves the muzzle? Then, add in the complicating factor that when the human mind feels the need to go fast, it wants you to look at the target, not the front sight. Stress does interesting things to your ability and your willingness to put your focus on the front sight. So does age. The military recognized this and started experimenting with the red dot–sight concept around 1970. Those concepts have been developed, tested, and accepted to the point where they are now standard equipment for almost everyone who carries a rifle in battle.

Those same principles work for shooters who feel the need for speed with a pistol, whether for self-defense, competition, or hunting. When using a red dot, keep both eyes open, look through the view-port, focus on the target, and superpose the red dot on the point of aim. That “activate the trigger smoothly” thing still comes up, but a red dot greatly simplifies aiming.

In the March 2020 issue, we provided a look at four modern everyday-carry (EDC) pistols with slide-mounted red dots. We compared accuracy and times required for various drills between the pistols and added in a comparison of some drills without the optics. The pistols that were red-dot equipped showed much higher scores than those without. Our methodology in that test was to use multiple pistols with the same or a very similar optic (Shield RMSc and SMSc). After publication, one of our readers contacted us and requested that, next time, we test red dots instead of the pistols. With that goal in mind, we selected a SIG Sauer X5 9mm Luger ($999) – currently one of the hottest pistols for the United States Practical Shooting Association’s (USPSA.org) Carry Optics division — as the test bed, along with a selection of red-dot sights, that would be appropriate for competition, hunting, or self-defense. Sights chosen were the Vortex Razor RZR-2003, $500; the Trijicon SRO SRO2-C-2500002, $750; the SIG Sauer Romeo 1PRO SOP1P101, $440; and the Crimson Trace CTS-1250 01-00560, $259.

We used a different testing routine than normal for this group. First, we did the testing with a single pistol with a single optic mounted over an extended period of time. We sighted in each red dot in turn, then shot them for groups at American Shooting Centers in west Houston. We shot the pistol/optic combo in practice for about a month, then finished everything off with a USPSA match.

Our biggest challenge/concern with the red dots has been mating them to the pistol. Rifles are well known for needing specific mounts for a specific model. We’re not sure why, but we never considered that before commencing this test, and we had issues. We needed an adapter to mount everything to the SIG X5. Even the SIG Romeo1Pro didn’t fit the SIG X5 without an adapter. Also, we found out the hard way that a SIG X5 and a SIG X5 Legion use different adapters! That required some careful work with a flat file.

We used Springer Precision (SpringerPrecision.com) for our adapter plates. Springer provided quick service and some great tech support, but we still had to improvise then find some extra 6-48 screws online. C&H Precision Weapons (chpws.com) also offers some adapters. The easy solution might be to look for a sight with the Docter pattern. Perhaps the manufacturers could post a list online of what adapters worked with which pistols? Could a more universal mount be created, as with a Picatinny rail? All things considered, we were impressed. We remember the early red dots when they were introduced to USPSA competitions in the late 1980s. What we tested here are light years ahead of those. To confirm our trust in this technology, our personal EDC, home defense, and competition pistols all mount good red dots.

We used the same Remington 115-grain 9mm ammo for all shooting tests. Here’s what we found:

The Houston test team frequently uses Vortex Optics in our tests. Overall, we have found them to be accurate, dependable, reasonably priced, and backed by outstanding customer service. So, when we saw that Vortex had introduced a Razor model (their top of the line) red dot, we had to try it. The Razor red dot is a waspy 2.0-ounce sighting device, and that includes the plate needed to mount it on the SIG X5. We measured the length at 1.83 inches and the width at 1.3 inches, a reading which included the handle on the right side used to open the battery compartment. The top of the sight stood approximately 1.6 inches above the top of the slide when using the Springer Precision mount adapter (SpringerPrecision.com, $57 delivered). The adapter and sights were all easy to install. Field strip the top end off the pistol. The extractor spring guide must be depressed so that the slide cover plate can be removed. Then slide the striker assembly out to the rear, exposing the two screws that secure the rear sight assembly/top plate to the top of the slide. Unscrew those, remove the sight assembly, slide the adapter plate into the now-exposed dovetail and attach your sight. It is all very easy to do, but we suggest that you note the position of the pieces in the extractor assembly — that will probably come out on you while you work on the sight.

We found the controls to be fairly easy to access while still being well-protected. The On/Off buttons also serve to adjust the dot intensity, and they are located in a slightly recessed area immediately behind the glass. If our manual image-intensity meters (also known as Mark 1 Mod 65 eyeballs) are correct, there are nine brightness settings. These run the gamut from very visible in bright daylight to usable in a low-light setting. The shooter has to hold down the appropriate button for almost five seconds to turn the dot on or off, making accidental activation very unlikely. Windage and elevation adjustments are on the right and top sides, respectively. Clicks move the dot 1 MOA, and set screws to lock down those adjustments are provided. Battery life was estimated at 282 hours continuous run at a medium setting, and, potentially, more than 30,000 hours at the lowest setting. The unit automatically shuts down in six hours. That is plenty of time for hunting or a shooting match, but could be problematic for those who wish to use this unit for home self-defense. We would much rather see some type of “shake and wake” activation. The battery compartment loads from the right side. A slotted handle protrudes that allows the shooter to easily slide out the battery tray and insert a fresh battery. No disassembly or tools are required.

The Razor also includes a Picatinny rail adapter that allows the unit to be mounted down low on a shotgun, MSR, or something similar. We really liked the versatility this brings to the Vortex dot. The dot comes with a hard-plastic cover to protect the entire unit. Easy to put on. Easy to take off.

Our Team Said: Compact with a low, large dot, the Razor comes with multi-purpose mounts. Controls were easy to use. We liked the side-opening battery compartment and the included Picatinny rail adapter, but battery life was a bit limited.