The 380 ACP is a popular personal-defense handgun and has moved into territory once held firmly by the snubnose 38 Special and even the 9mm as a go-to choice for self defense. It’s easy to understand why the 380 is trending up: The pistols it chambers are light, reliable in quality examples, offer low recoil, and though wound ballistics are not in the class with the 9mm Luger, results on target are impressive compared to results obtained even a few years ago. All calibers demand a balance of expansion and penetration to be effective. If you cannot have both, then any compromise must favor penetration, and we see some deep hitters in this test, even compared to bullets as recent as four years ago.

In the August 2016 issue, we did a comprehensive test of 380 ACP defense loads from 56 to 99 grains in weight. That test also contained a table from our first examination of the round in the October 2010 issue. For this issue, we put together a cross-section of ammunition in different bullet weights and types from 60 to 102 grains, and we’ve included the tables from the earlier tests for your easy reference as well.

There were several takeaways from the test we will share at the beginning. First, we’ve included a type of ammunition not tested previously, all-copper bullets from Lehigh and Black Hills Ammunition, that offered interesting results. Also, we note with some affection that recoil with these rounds is modest. No shooters were rubbing their wrists at the end of the test.

Also, we know that ammunition is in short supply, and it’s likely that it will be hard to find a variety to test in your own handguns, which is what we recommend. But we ran this at a time of ample ammunition supply, so we’re not teasing the results, and we’re now having the same trouble as you are getting ammunition to test.

In our minds, it’s even more important today to know what rounds to look for that will produce good terminal results. There are several A grades below, so we’d start our shopping with them and then settle on something else if we have to. Also, we’ve removed the pricing from these results because any pricing from very early 2020 is likely to be off because of today’s market conditions. Our buying advice for the foreseeable future is if you find a recommended load in stock, buy as much as you can afford as fast as you can.

We fired 40 rounds in some cases, but the 25-round boxes were fired to the tune of 50 rounds, and the 50-round boxes were expended as well, so some loads were fired 50 rather than 40 rounds. In all of the firing, the only malfunctions were three short cycles with a single brand of ammunition.

We clocked all loads in the Glock 42. We also fired six loads at random in a Ruger LCP II for comparison. On average, the Ruger lost 38 fps in velocity. We also fired three loads in a Colt Government Model 380, which lost an average of 26 fps. The Glock is no slouch on velocity despite its short barrel.

We also should note an oddity that we didn’t expect. One of the raters keeps his Glock 42, the one used in the test, loaded with Honey Badger rounds. He had used some type of cleaning/lubricant and not cleaned the pistol for several weeks prior to the tests. The copper-headed cartridge in the chamber was soaked to the point it was black, and so was the next cartridge in the magazine. The rounds looked odd, but still fired.

The loads tested, on average, performed as designed, providing either expansion or penetration but seldom both. The Best Buy, Fiocchi’s 90-grain JHP, offers reasonable performance for what we paid. The most reliably performing expanding-bullet loads were the Black Hills and Fiocchi loads using the XTP bullet. We feel the Lehigh and Black Hills all-copper loads will produce tissue damage and penetration is assured. We would feel confident in the ability of the all-copper loads to produce adequate penetration. We would shy away from loads producing less than 12 inches of penetration. You can’t hope for too much with this caliber. If you want light recoil, surprising accuracy, and good penetration, then it is certainly attainable. You won’t get 9mm Luger performance, of course. The heaviest bullet tested, the Remington Golden Saber, is an outstanding overall performer. The Golden Saber load or a 90-grain load using the Hornady XTP bullet seem the best choices for the 380 ACP self-defense pistol, we believe.

Here’s how the rounds performed, listed in ascending weights: 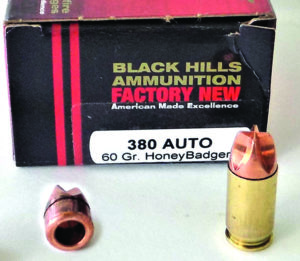 The Black Hills Ammunition Honey Badger uses a bullet manufactured by Lehigh. Velocity is greater than advertised, 1167 fps versus the advertised 1150 fps. This ammunition offers mild recoil and is easily controlled. Function was 100% in the Glock. Accuracy was excellent, near the top of the test. Penetration is 18 inches.

These rounds are available directly from LehighDefense.com. This load is similar in concept to the 90-grain Lehigh. The Lehigh bullet is an all-copper design. The bullet is fluted and designed to create wound potential through both cutting and fluid dynamic damage. The flutes are sharp — you actually must be careful when pressing against the bullet nose loading the magazine. The bullet may not expand, but it begins causing tissue damage immediately on impact. The bullet seems to have a buffeting effect in water. The upset is greater than a full-metal-jacketed or round-nose bullet, we saw.

Velocity is greater due to the light bullet. Despite the high velocity, recoil is light. Control is good. This loading breaks 1182 fps on average, slightly greater than the Black Hills Ammunition Honey Badger, which weighs 5 grains less. Penetration in water is 18 inches. (This correlates to 14 inches in gelatin.) This is a credible loading for personal defense. Those concerned about underpenetration with the 380 ACP will find this loading attractive.

This loading uses a 75-grain bullet. The bullet is a composite material intended to break up on hitting the target, but some of the bullet — the base — will reach a greater depth. There were several good things about the load. First, it clocked 1099 fps, almost 150 fps over the rating. Yet recoil was modest.

While other loads had a lower power factor, none felt lighter. There was no muzzle flash and no unburned powder to speak of. Accuracy was very good. While we prefer more penetration, rating it down in this regard, it does exactly what it is intended to do. Those favoring a fragmenting bullet will find much to praise here.

This is a relatively new offering. It is designed to be affordable for training purposes but also be suitable for personal defense. As an example, 100 rounds would be just over $50, while 100 rounds of the HST would be $75. The 85-grain JHP is lighter than the 90-grain JHPs used in most loads and faster at 966 fps. Penetration is 14 inches. We liked the low recoil, accuracy, and expansion. All bullets expanded to 0.51 inch very consistently, some were at 0.58, counting the peeled jacket. This is another good buy.

This load uses the Hornady XTP bullet. Recoil is modest and accuracy excellent. At 902 fps, this loading penetrates 18 inches of water, which we feel is ideal for personal defense. Expansion is modest at 0.47 inch, but reasonable for the caliber. With the 380, you may have one or the other, but not both expansion and penetration. This is a good choice and also a good buy.

The Buffalo Bore JHP offers excellent performance. This loading is a unique offering. Buffalo Bore usually stresses penetration, and they offer deep-penetrating 380 ACP loads. This loading, however, is different. Penetration is only 10 inches. Velocity is a startling 1102 fps. This is a very fast loading that expanded to 0.54 inch. Recoil was there but not uncomfortable. Accuracy was good. While this seems an impressive loading, we also experienced several short cycles. We believe slide velocity outstripped the ability of the magazine to feed. The senior rater took over after a rater experienced several short cycles, usually on the last round. The rater took a death grip but also suffered a short cycle on the last round. The load is strong enough to outrun the Glock’s recoil springs. We ran the second box through a vintage Colt Government Model 380 to test function. The Colt ran 100%. While this is a strong and no doubt effective loading, it is not a good match for the Glock 42. We rated the load down a full grade on function.

This offering and the Federal Train + Protect are similar in concept. The Fiocchi offers a hollow-point bullet, and they are packaged in a 50-round box. They are economical for practice, and while not as complex as design as the XTP or HST bullets used in more expensive loads, they expand well. The Fiocchi JHP breaks 909 fps on average and penetrates to a depth of 16 inches. Expansion is near optimum at 0.52 inch (0.54 if you count the jacket). A balance of performance and economy (pre-pandemic pricing) makes this the Best Buy.

This is a true half box at 25 rounds. The load is accurate, offers modest expansion, and good reliability. Penetration is superior to the standard Fiocchi JHP. At 907 fps, the Extrema, using the XTP bullet, penetrates 18 inches and expands to 0.46 to 0.47 inch. This is a superior load.

The Critical Defense, or FTX bullet, uses a polymer plug over a hollow-point bullet. The plug is intended to instigate expansion no matter what material is hit. The bullet usually performs well in testing. Velocity in the Glock 42 is 934 fps. Penetration is good at 14 inches, and expansion acceptable at 0.50 inch. What you see is greater expansion limiting penetration compared to loads using the XTP. We would have liked more penetration, but the bullet performed well overall.

The 90-grain bullet is designed for maximum penetration. We have tested the common 95-grain FMJ previously, and penetration is usually 18 to 20 inches. At 952 fps, the 90-grain Lehigh all-copper bullet penetrated 24 inches. This bullet offers excellent penetration for the caliber. Penetration was greater than a standard FMJ bullet at the same velocity, and so was disruption in water, so there is something to it. Accuracy and function were good. We rated this loading high because it performed as advertised.

The HST is a highly developed projectile used in law enforcement, and its design has earned a good reputation. The HST clocked 960 fps, fast compared to the other 90-grain bullets. Penetration was light at 12 inches. Expansion is excellent, a nice plump expanded mushroom. While we liked the function, accuracy, and expansion we like more penetration. We rated the load down a half grade on light penetration. With a consistent 0.61 inch expansion, this is impressive. A singular example penetrated 11 inches at 0.64 inch expansion.

This is the Golden Saber by another name, and that isn’t a bad thing. The BJHP (brass jacketed hollow point) is the heaviest bullet tested. There was some recoil, but it isn’t excessive. Accuracy was good. The Remington load went into a special niche. Loads that penetrated more expanded less, while loads that expanded more penetrated less.

The Golden Saber did not quite average 900 fps in the Glock, slower than most loads as a result of a bullet heavier than most 380 ACP bullets. The 102-grain bullet penetrated an average of 15 inches and expanded to 0.59 inch. Expansion was very consistent. This is an attractive overall balance that many shooters like us will want.

The accuracy figures are the average of three five-shot groups. For accuracy, we fired the test gun from a benchrest at a 15-yard target.

To calculate IPSC power factor, multiply bullet weight in grains by the velocity in fps, then divide by 1000. 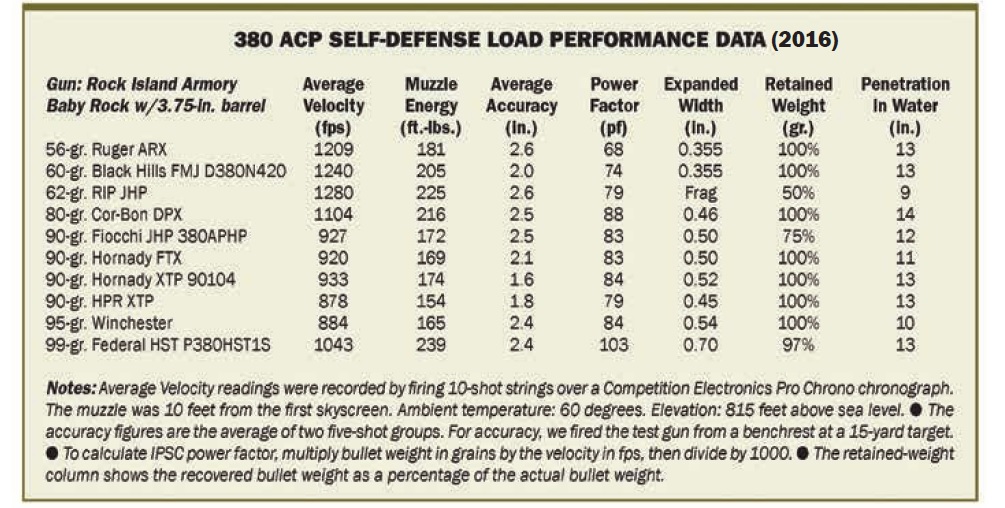 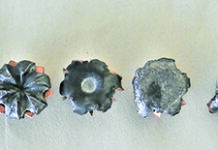 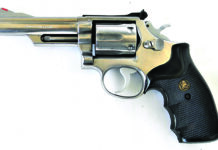