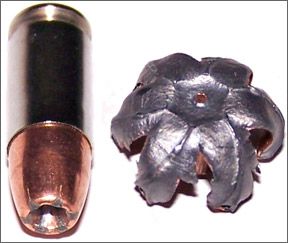 Unquestionably the most popular military handgun cartridge of all time is the 9mm Luger. Originally used by Germany beginning in 1906 and universally adopted by the German Army in 1908, the 9mm Luger impressed the world enough that by 1950 the majority of the worlds armed services had chosen the 9mm Luger as a service cartridge. The hodgepodge of bottlenecked .30s and short-cased 9mms were put away by the efficiency of the 9mm Luger. America clung to the 1911 45 ACP largely because we had millions on hand. By 1954, the Browning High Power, French MAC 50, Beretta 1951 and Smith & Wesson Model 39 had set the pace for modern service pistols. By 1990 the 9mm was also the universal law-enforcement caliber. A few diehards clung to the 357 Magnum, and the 45 was used by a few agencies. The major agencies have since went to the 40 S&W or 45 ACP, often after hard lessons, but the 9mm undoubtedly remains a success story.

The question is, is the 9mm a good fight stopper? That question has many answers, and it depends upon who is doing the asking. In military ball form, the 9mm has a reputation for needing more than one hit to stop the majority of adversaries. The 9mm pucker and straight-through shot does not have the desired effect on motivated adversaries. The historical reference is too well proven to argue against. Remember, these are soldiers firing full-size service pistols with full-power ball ammo. A civilian firing a compact pistol and common generic ball is far less well armed. Also, the 9mm has proven problematic in police service, and the 40 and 45 have replaced the 9mm in many agencies. Notably, agencies using certain loads, such as the +P+ Winchester SXT, have few, if any, complaints concerning the 9mm. And there is the rub. The 9mm is very load sensitive. With the best loads, the 9mm may approach the effectiveness of the legendary 357 Magnum. With poorer loads, the 9mm is little better than the 38 Special. Until the basic laws of physics are changed, no smallbore will be able to do the work of a big bore. Only actual damage and wound potential may be measured. Energy drop, stretch cavities and shock are not reliable predictors of effectiveness. The advantages of the 9mm are many, but frontal diameter and weight are not among them.

On the plus side, the 9mm is easy to use well. It has all of the recoil that the average occasional shooter can handle, particularly in lightweight carry guns. The 9mm is an efficient cartridge for its size, packing what punch it has into a light package. The 9mm handguns have an impressive reserve of ammunition, with even the compacts often carrying 10 to 15 rounds of ammunition. A continuing thread in many of the discussions we have with professionals is that if they want the best wound potential, they carry a 45, but if they want a lot of shots, they carry a 9mm. We know of few professionals that carry the 40 on their own time and their own dime.

With the shortcomings and advantages of the 9mm mapped out, we chose the cartridge for close scrutiny in wound ballistics. We would compare the expansion and penetration qualities of several loads. Some of the criteria are objective and some subjective. Some may prefer a heavy bullet, others a light bullet. This is subjective. But the objective criteria is this-the load must be reliable. Only a consistently reliable load with good feed reliability and good primer seal and case mouth seal is suitable for service use.

Elsewhere, in general the 9mm hollowpoints offer less penetration than the big bores, but more relative expansion. A number of years ago the FBI found the penetration of the 9mm 115-grain JHP lacking during a critical incident. They adopted the 147-grain JHP as an alternative. All of us do not have a need to shoot through car doors and light cover, but some of the 115-grain loads exhibit the minimum of penetration most of us are comfortable with. The 124-grain JHP is a compromise of sorts that many find offers the ideal balance of expansion and penetration. When testing the 9mm loads, the range of performance impressed us. The standard-pressure loads in particular were very consistent, with little to choose from among them-but this was not the case when we tested +P loads and particularly when considering the range of bullet weights.

Over time, we have tested bullets weighing from 88 to 147 grains. Weve found the 9mm ran a 100% variation in penetration, with some loads penetrating as little as 7 inches and others well over 14 inches. For our testing, we have come to a consensus that personal-defense ammunition should exhibit penetration of 12 inches and expansion to 1.5 diameters. We are willing to compromise to an extent when the cartridge needs extra help with expansion for effectiveness. After all, some of the 9mm cartridges that have performed so well in Federal service, such as the +P+ 115-grain JHP, are light on penetration.

In this installment, we are testing eight loadings. Seven are popular standard-pressure loadings, and we have included one +P load for comparison. Each has proven popular among shooters, and reader feedback demanded we test this class of 9mms. The competitors include the MagTech 92.6-grain First Defense, the MagTech 115-grain JHP Guardian Gold (the only +P tested), the Fiocchi 115-grain XTP, the Speer Gold Dot in both 115- and 124-grain weights, the Fiocchi 124-grain XTP, the Hornady 115-grain Critical Defense, and the Remington 124-grain Golden Saber.

After much firing and comparison, the 115-grain bullets offered the greatest expansion, and a smallbore cartridge really needs expansion. Given adequate penetration, expansion is important. The expansion and penetration balance inherent in the Gold Dot 115-grain load made it a subjective winner. Accuracy was topnotch, tied with the 124-grain Fiocchi for first place. Among the 124-grain loads, the consistent results of the Fiocchi 124-grain XTP loading are also considered excellent performance. The greater balance of penetration may sway some of us to choose the 124-grain load.

In the end, it is marksmanship that will carry the day, but some loads have advantages over the other. In coming installments we are going to consider the performance of +P rated loads and also the heavyweight 147-grain loads, revisiting these results as we compare the popular 9mm loadings.

Here are the Report Card grades for these rounds:

Speer Gold Dot 115-Grain No. 23614, $27.95. Purchased at a discount price of around $20, the Gold Dot is among the first bullets designed specifically to meet the FBI criteria for expansion and penetration. The Gold Dot expanded more than any other bullet tested. Accuracy was good, and weight retention excellent. Based on a combination of retained weight and expansion, this is the front-running load, in our view.

Fiocchi 115-grain XTP No. 9XTP, $22.79/50. This line uses the proven Hornady XTP bullet. This loading gave good accuracy and produced a good balance of expansion and penetration. When accuracy and quality control are figured, the Fiocchi load looks very good. Expansion is not radical, but is solid and repeatable. This is a 50-round box of high-quality ammunition, allowing a decent amount of ammo for proofing the pistol and with a gun load remaining. This makes the Fiocchi a Best Buy.

Fiocchi 124-Grain XTP No. 9XTPC, $24.65/50. It is similar to the 115-grain load, but with greater penetration. Expansion was good, and retained weight ideal at 100%. Very consistent and very accurate. If you prefer a balance of expansion and penetration that favors penetration, the 124-grain XTP looks good. At the price, its another Best Buy.

MagTech 115-grain JHP Guardian No. GG9A, $14.06. This was the only +P in this group and the second-fastest round tested. We had to pay almost $6 more than the list price to get this one. This load showed a decent SD and acceptable accuracy. This load tended to lose its jacket in water testing. This load would have been in the running a decade ago, but today we demand greater cohesion and better penetration. Still, if you prefer bullet fragmentation, it is a good choice.

Hornady FTX No. 90210, $19.99. It displayed the consistency and accuracy Hornady is famous for. This load is designed to expand more quickly and consistently than the XTP. Some of the advantages are intangible, such as guaranteed feed reliability, and we did not test expansion after meeting wallboard or sheet metal barriers. In any case the FTX proved consistent in water.

Speer 124-Grain Gold Dot No. 23618, $27.95. It definitely lost expansion compared to the 9-grains-lighter 115-grain bullet. Expansion was still adequate. This would be a good load for those who deal with heavily clad felons during the winter months. Accuracy and quality control are good.

Remington Golden Saber No. GD9mmB, $27/25. This is another bullet developed for police service. The Golden Saber also offered good expansion, and every recovered bullet was very consistent in appearance. Remington enjoys a well deserved reputation for feed reliability. The Golden Saber is an interesting choice, and though pricey, the Golden Saber offers five more rounds in its 25-round box.

MagTech First Defense 92.6-Grain No. FD9A, $20.93. This is an interesting loading using a solid-copper bullet. While feed was reliable, this load showed the highest standard deviation (SD) of any load tested. It is difficult to achieve good consistency with a lighter bullet. There are simply bullet pull issues. Accuracy was adequate. The all-copper bullet performed well, but not as consistently as we would have liked. GT