The 375 H&H Magnum is still one of the best cartridges in existence. One of our test crew calls it his favorite cartridge. The 375 is undoubtedly very versatile, especially for the reloader. Although some ammo companies today, notably Hornady, load the cartridge up to higher power than it originally had, there’s little or nothing to be gained by so doing, as we have repeatedly seen here. In fact, the shooter gains more from this cartridge, we feel, by loading it down, not up. He can even shoot round lead balls from the 375 if he is a clever and determined reloader. Although the usual realm of the 375 is hunting larger game including elk, moose, bear, and most African plains game, some of us have found over the years that modest jacketed-bullet or cast-lead-bullet loads in the cartridge make it an excellent deer cartridge.

The weight of a 375 rifle can be a problem for the deer hunter. A proper 375 is going to weigh around 9 or 10 pounds, while an ordinary deer rifle might weigh 6 pounds. Why carry the extra weight? If you can shoot it well, there’s no harm in using a powerful rifle for all your hunting. There is really no such thing as overkill, but there is such a thing as using an unsuitable rifle that fails to kill quickly, which no true hunter wants. The only way to learn to shoot a big rifle well is to shoot it a lot, and sub-power loads make that easy. Some of us have experienced great satisfaction from mastering a big rifle. We’ve found it more rewarding to shoot a sub-inch group with a 375 with full-power loads than with a 22 centerfire. Light handloads make the 375 into a fun gun, one you can learn to shoot well, but overpowered heavy loads take a lot of the fun out of it.

We finally obtained one of the more elusive rifles on the big-game scene, the wood-stocked Kimber Caprivi in 375 H&H Magnum (also available in 458 Lott). Once we had this gorgeous rifle in hand, we went looking for other 375 rifles for our comparison testing. We acquired a CZ 550 American Safari Magnum, which lists for a bit over a grand ($1179).

Both had Express-type iron sights, with a wide-angle V rear and a bead at the front. This setup, for those who have never tried it, gives a very clear sight picture, the rear V acting to some extent like an aperture and making even aging eyes able to discern the front bead. In both rifles the iron-sight picture was outstanding. One common problem with Express sights is the maker sometimes sets the rear sight too close to the shooter’s eye, but both rifles had it plenty far out on the barrel. CZ’s V notch left two shoulders on the sides of the rear blade, which maybe helped prevent canting the rifle. The other had a full-width Vs and a protective cover to the front sight.

Both rifles also had two folding leaves, the CZ alone marked for 200 and 300 yards. All three blades on the CZ had a prominent white centerline beneath the V. The Caprivi had a scribed line on each leaf, but in the old British style the folding leaves were unfiled, that being a job for the owner’s gunsmith once he has settled on his one hunting load. Our shooters’ eyes were most pleased with the sights on the Kimber Caprivi, largely because of the big front bead on that rifle.

We tested these rifles with Hornady Heavy Magnum with 270-grain JHP, Remington Express 270-grain RNSP, and Federal Power-Shok 270-grain RNSP. Be advised 375 ammo sells for about $3 a shot, at a time when you can still get a decent handmade cigar for that price. Thus handloading is probably the way to go if you want to shoot your big rifle a lot. We shot them with iron sights to get a feel for them, and then scoped them for our bench testing.

To read how we tested and our recommendations on these rifles, purchase the ebookBolt-Action Rifles & Gear, Part 1fromGun Tests. 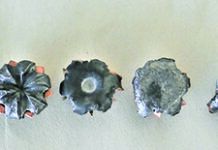