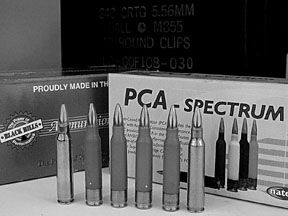 If you haven’t noticed, the AR-15 semi-automatic has become arguably the most popular rifle of modern times. Chambered in .223 Remington, or if you prefer 5.56mm NATO, its versatility is unmatched. Not only is the gun incredibly easy to shoot well, but chores such as field stripping, sight alignment and magazine unloading can be accomplished with only the tip of a bullet. For these chores it really doesn’t matter which ammunition you choose, but if carrying around large quantities of .223 is on your agenda, you might want to check out PCA Spectrum ammunition from Natec.

The letters PCA stand for Polymer-Cased Ammunition. and it is American-made (11 Arkansas St, Plattsburgh, NY 12903, [518] 324-5625, www.natec-us.com). We found the PCA ammunition at Houston-based Pruett’s Guns and Ammo (832-237-GUNS) where it was the topic of the day. PCA Spectrum cartridges currently available for the commercial/law enforcement markets include: .223 Remington in 55-grain FMJBT, 55-grain Sierra Blitzking, and 69-grain Sierra Matchking HPBT. Cartridges to be introduced in mid-2004 include .308 rounds in 150-grain FMJBTs, 150-grain Sierra Gamekings, and 168-grain Sierra Matchkings.

Traditionalists may shudder at the thought of plastic invading their chambers, but our tests showed this product offered safety, reliability and accuracy. The fact that available case colors such as gray, green, black, white and blue was only secondary in our concern but if we could have gotten them in camo or stars and stripes that would have been different.

Actually, only the case body was polymer. The head and web of the cases extending approximately 0.385 inch was brass. This was enough to hold the primer and withstand the balance of pressures in order to meet ANSI/SAAMI specifications. The total length of the polymer section was approximately 1.36 inches to the mouth of the case. The benefit of such construction would seem to us to be primarily the reduction of weight. For the smaller framed female soldiers this could certainly be a consideration. Then again, every soldier, male or female, big or small is already forced to struggle with strength-withering heat exacerbated by body armor, and carrying less weight would help.

We compared the PCA ammunition to two of our favorite rounds both utilizing traditional brass cases. These were the 55-grain G223B-3 from Georgia Arms (800-624-6861) and the superb 52-grain Match Hollow Point loaded by Black Hills Ammunition, (605-348-5150). We used an RCBS beam scale and found that the total approximate weight of each loaded round was 173 grains for the Black Hills Hollow Point and 175 grains for the Georgia Arms FMJ jacketed round. But the PCA rounds weighed only 137 grains, slightly more than a 20-percent weight reduction. Grains may sound like a small increment, but the difference was noticeable even when holding a single round in each hand.

Our first test consisted of simply firing offhand several 20 and 30 round magazines of the 55-grain FMJBT (full-metal-jacket boat tail) ammunition. It functioned flawlessly in our customized Eagle Arms carry-handle AR equipped with a 20-inch barrel and Bushnell Banner 1-4X32, Circle-X scope. For collecting accuracy data we set up a bench at a distance of 100 yards. All three rounds felt different upon ignition. The Georgia Arms rounds felt somewhat neutral in terms of recoil when compared to the Black Hills Round that pushed the gun briskly back. The PCA rounds felt almost underpowered by comparison. But our Oehler Chronograph made it clear that felt recoil and velocity was not always in line. The fastest traveler was predictably the Black Hills round with an average velocity of 3229 fps. The Georgia Arms round never broke the 3000 fps barrier. But to our surprise the softest-shooting round was the PCA round, averaging as much as 3137 fps, (with a high and a low velocity of 3175 and 3105 respectively). Theories as to why recoil felt lower ranged from the surface of the polymer playing a part in easing bolt action or ejection to factors such as powder burn rate and expansion. Our rifle was equipped with a Carter Custom MK II compensator, and perhaps the PCA rounds made the most of this design.

In terms of accuracy, both metal-cased ammunitions outpaced the polymer-bodied rounds. What’s more, they shared the same windage setting. The center of the groups shot with the PCA rounds was approximately 3 inches left at 100 yards. Although it is not unusual for the point of impact of different rounds to vary, the most important aspect is uniform accuracy from a specific round. The top performer was the Black Hills Match Hollow Point. Five-shot groups measuring less than 1 inch was easily obtainable. Our best single group measured 0.7 inch. The rounds from Georgia Arms were close behind with a best group measuring only 1.1 inches, but most groups printed closer to 1.4 inches. The PCA Spectrum ammunition was less consistent. Our best effort was a respectable 1.4 inches, but flyers were more common. Most of the groups were right at 2 inches.

We would guess that one pitfall of polymer-cased ammunition is mastering the crimping process. Then again there probably were some skeptics that thought the cases would blowout or not function at all. But certainly that was not the case.

Gun Tests Recommends
PCA Spectrum .223 Rem., $5.12/20. Buy It. At 100 yards the polymer-case PCA Spectrum ammunition may not have produced spectacular results, but it did offer lower carrying weight, a low price and provided acceptable performance, in our view.