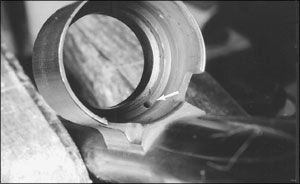 Introduced in 1963, the Remington Model 1100 shotgun has been around for over 50 years now. Variations include a sporter for field shooting, a Magnum version for ducks and geese, as well as a skeet and trap model for those who enjoy breaking clay targets. In all, there have been well over 3,500,000 Model 1100s produced over this period of time so you are bound to see one (or more) come across your bench.

In this article, I’ll cover some of the common problems that result in ejection failures along with a few of the possible glitches that aren’t seen very often. And, of course, I’ll examine the cures that will help you get this shotgun back in service as quickly and efficiently as possible.

As always, before you begin disassembly, make sure you’re dealing with an empty firearm by pulling the bolt handle back until it locks in the open position. Stick a finger into the magazine tube to ensure there’s nothing in there that could cause a loud noise. Because we’ll be dealing with springs, make sure you have a pair of safety glasses in position on your face.

Takedown for the 1100 shotgun is quite straightforward and very simple. Unscrew the forend cap and slide the forearm off the magazine tube. The barrel will then come out of the receiver. Peer into the back end of the ring that hangs from the bottom of the barrel and fits over the magazine tube. You’ll see a small hole or two drilled through and into the interior of the barrel. This hole(s) bleeds gas from the fired shell into the gas system to operate the action. It’s rare for this hole to get plugged up completely, as Remington designed the gas hole to self-clean as the gun is fired. Carbon can build up in this area, nonetheless, so a cleaning with a “Ream-n-Klean” bristle-type pipe cleaner dipped in solvent should remove any carbon buildup that may be present.

If more drastic measures are called for, refer to the table in Figure 1, which will give you the size of the gas hole you’re dealing with. Some folks will recommend using a number drill of the appropriate size to clean any stubborn carbon away from the walls of this hole. Four- and six-fluted reamers are also available in all number sizes. I prefer to use these when removing stubborn carbon, because the reamers have more guiding edges that will help to ensure that the reamer goes in straight as it’s twirled between the fingers.

Look into the chamber to see if there is any rust or pitting in this area that could grab a spent shell head long enough to retard ejection. If rust is present, it can be removed with #0000 steel wool wrapped around a wood dowel spun in a hand drill. There are two rings on the outside of the magazine tube, the piston and piston seal. These are retained toward the front of the receiver by an O-ring (barrel seal). These rings will now slide off the front of the mag tube. Inspect the O-ring for cracks or brittleness and replace it if it’s suspect. The piston and piston seal will last a long time, but if they show any indications of rust or pitting on the opposing angled faces, replacement is in order. When reassembling these two parts over the magazine tube, make sure that the slits in each part are 180 degrees opposed to each other. If gas is allowed to blow through the slits when lined up, some of the gas needed to operate the shotgun correctly could be lost.

Receiver Disassembly on the Model 1100

Inspect the extractor for any visible signs of chipping on the front (hook) end of the extractor. If it’s chipped, the extractor should be replaced. Push the extractor outward to get a feeling for any dragging of the extractor plunger. If the movement feels gritty, the extractor will need to be removed along with the plunger and spring. A thorough cleaning of the parts and the area where they reside should smooth things out, and a few drops of Break-Free CLP on the parts before reassembly will keep them lubricated.

The link rides along rails machined in the receiver, and as the bolt travels rearward, it pushes the link backward against tension from the action spring. Use a pair of needle-nose pliers to pinch the rear legs of the link together and then push the link forward. Turn the link either right or left and it can then be removed from the receiver. Carefully feel along the rails that the link rides on for any burrs or sharp edges that might be present. A cotton swab rubbed along these rails will find any sharp edges by leaving cotton fibers clinging to the burrs. Burrs can be removed by carefully sanding them smooth with 600-grit emery paper backed by a small hardwood block. Don’t overdo the sanding—just remove the burrs until the area feels smooth. The link is a stamped part and quite often there are burrs along the edges of the link where it rides along the rails. These burrs can be removed with a fine-cut needle file and then polished with a felt bob or 600-grit emery paper on the face of the link that rides on the receiver rails.

To get at the action spring, the follower, and the plug, the stock will need to be removed. Remove the recoil pad or butt-plate which will expose the action spring tube nut. The wrench I use for this part of the takedown was made over 40 years ago and does the job without risk of damaging the nut slot or stock. There are wrenches available commercially to do this job, and I highly recommend them over a screwdriver-blade-type tool. These wrenches fit over the end of the nut and guide a correctly fitting blade into the slot, providing plenty of strength to remove the nut and reinstall it.

The action-spring follower has a tapered hole in the front end and a ring machined on the inside of the tapered hole that retains the rear end of the link. The followers (part #15171) that I have in stock are made of steel, but apparently Remington made these out of aluminum at some point in time. The one shown in the photo here was made from aluminum and removed from a Model 1100 in 12-gauge Magnum. For reasons unknown, the coned end of this aluminum follower flared outward and was dragging on the inside walls of the action-spring tube with enough pressure to impede the ejection process. My suggestion is to replace any aluminum action-spring follower you run across with the steel type to avoid this possible problem.

Measure the length of the action spring. These springs will develop a “set” over time from the compressing action endured during the firing cycle. A new action spring measures around 15-1/4 inches when new, so if the spring you removed measures, say 14 inches or less, it’s developed too much set and should be replaced with a new spring.

The owner and I discussed a couple of approaches to the repair. Should the firearm be sent back to the factory for what might be a costly repair? Or could he put up with a repair that might have a minor effect on the cosmetic appearance of the shotgun but would be much less costly? The second option was the owner’s choice.

The receiver was set up in my milling-machine vise with the shallow hole (where the barrel-alignment button was) centered under the drill chuck. A #36 (.1065 inch) drill was used to drill a hole through the receiver and then the hole was reamed with a #33 (.113 inch) reamer to produce a smooth, round hole. A new barrel-alignment guide was then turned in the lathe with a head diameter of .162 inch and a length of .060 inch. The shank of the alignment button was then turned to a diameter of .114 inch, which is .001-inch larger than the reamed hole with an edge chamfer on the end that would be pressed into the .113-inch reamed hole. The .162-inch-diameter end was also chamfered to break the sharp edge.

A dry fit of the button was then done to make sure that it slipped into the guide slot with enough clearance on the diameter and front end so that it would slide freely in the barrel slot and be just below the outside diameter of the barrel in this area. The shank end of the replacement barrel guide was then coated with Loctite #277 (permanent) and aligned over the hole reamed in the receiver verifying that it will go in straight. The alignment button was then pressed into place with a small arbor press. The pressing-in process can also be done in a drill press with a steel spud in the drill chuck. Once the new alignment button was in place, it was cold-blued to match the internal receiver finish.

The barrel-alignment button does just one thing: It keeps the barrel from rotating out of place in the receiver. There is no pressure on this part and nothing moves against it during the firing cycle. Its only purpose is to align the barrel correctly.

With this repair there will be a visible plug, .114 inch in diameter, on the outside of the receiver on the left side. If it ever breaks off again, however, the repair will be easier.

The cause of ejection failures can be analyzed with a few simple procedures and an understanding of whatever is happening that’s not normal. Any alteration to the cosmetic appearance of a firearm will require the approval of the owner, of course, and needless to say, no alterations should ever be done to any firearm that will compromise its safety.