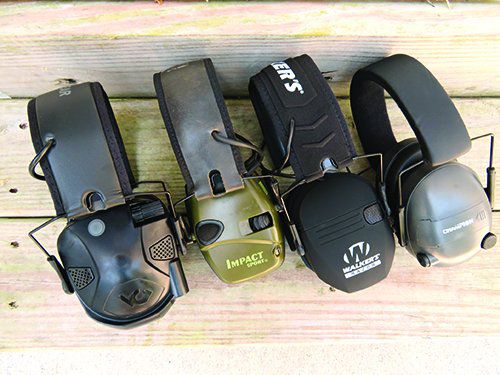 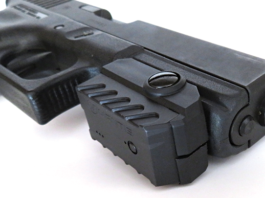 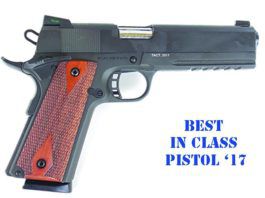 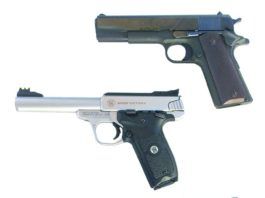 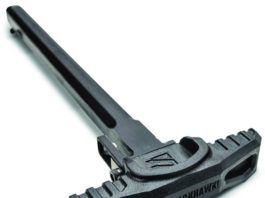 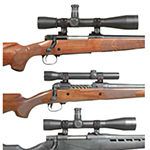 The 308 cartridge lends itself to being chambered in light rifles. The cartridge performs quite well on deer-size animals, and also it's lots of fun to plink with, given the easy accessibility to inexpensive ammo. For this test we looked at three light 308s. These were a Winchester Model 70 Featherweight Compact ($880), a Savage 11/111 Lightweight Hunter ($899), and a Mossberg 4X4 No. 27656, $471). We were unable to obtain a walnut-stocked Mossberg for a better comparison, but they are offered at $624, quite a jump from the black-plastic-stocked test rifle. We tested with Remington Core-Lokt 150-grain, Winchester Super X 180-grain, and with Remington Core-Lokt 180-grain loads. Here's what we found. 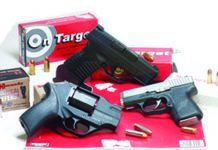 Choosing a carry sidearm is a complex task for most shooters, who must weigh power and portability, size and simplicity before spending hundreds of dollars and committing to wear a gun a good chunk of the day. Pistols usually have an edge in capacity, while revolvers have a point-and-shoot ease of use that's hard to overlook. Then there's the issue of cartridges. How much power is enough?, and how does the consumer sift the chamberings to get the most bang for his buck?

We recently tested three guns that illustrate a range of carry choices readers had inquired about, in effect pitting McIntosh and Red Delicious apples against a Valencia orange. In gun terms, our pistols were the new Springfield XD-S 45 ACP, $599, and Kahr's CM9 No. CM9093 9mm Luger, $382, going up against the Chiappa Rhino No. 200DS 357 Magnum revolver, $800. Those are counter prices from Fountain Firearms in Houston (FountainFirearms.us), where we acquired the guns.

What we wanted to find out, in particular, was whether the CCL holder had to sacrifice power (45 vs. 9mm) in order to get wear-all-day comfort, and whether a wheelgun, albeit an unusual one, could compete against subcompact pistols.

But here's where power factors in. The Rhino and the XD-S clearly outdistanced the CM9 in pop, so for some shooters, having the smallest footprint in the CM9 also means shooting the weakest round, which they won't like. And, the 9mm Luger's performance is further diminished because these short handguns won't generate all the rated power of their respective rounds — there's just not enough length in the barrels. Winchester's 115-grain 9mm Luger round in the 3-inch-barrel Kahr develops average velocity/energy figures of 984 fps/247 ft.-lbs., well behind the XD-S (3.3-inch barrel, 817 fps/341 ft.-lbs.) and Rhino (2-inch barrel, 1134 fps/314 ft.-lbs.) The Fiocchi rounds showed a similar gap, except the 357 Mag was the strongest at 370 ft.-lbs., compared to 305 ft.-lbs. for the 45 ACP round and 272 ft.-lbs. for the 9mm. The power margins are little narrower for Hornady rounds because the 9mm is a +P loading, so it makes 308 ft.-lbs. of muzzle energy compared to the 45 at 360 ft.-lbs. and the 357 at 380 ft.-lbs. Also, it's worth emphasizing that the Rhino had the highest energy ratings of the trio with two of the rounds (see the accompanying accuracy/chronograph table for details).

Besides comparing the numbers, we also tested all three for accuracy at 7 yards from a benchrest. Then we tested how each would perform when drawn and fired quickly, using Hornady Critical Defense rounds for the XDS and Rhino and Hornady Critical Duty for the CM9. For this defense test we had a target 7 yards downrange on edge, programmed to turn and face the shooter for 3 seconds, then turn back to edge, with a randomized wait time before turning. Our testers had to start from low ready and fire as many shots aiming at center mass as accurately as possible in 3 seconds. The target was a Birchwood Casey silhouette splattering target with X, 10, 9, and 8 rings.

On a gun-by-gun basis, we found some things we liked and didn't like about each of the carry contestants. Here's what we thought about each one individually: 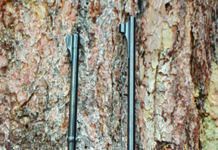 A Brace of 338 Win. Magnums: We Pick Winchester Over Ruger

The 338 Winchester Magnum is perhaps the most versatile of the so-called "all-around" rifle cartridges for North American hunting. The caliber is less intimidating than the physically longer 375 H&H, though it has similar performance. The 338 can be flatter shooting than the 375 with careful choice of loads, and also carries its power to long distance well, thanks to the great sectional density of its more useful bullet weights. A 375 commonly shoots 235- to 300-grain bullets, and bullets in that weight range are readily available in 338, at least for reloaders. The 338 bullets are slimmer, and therefore retain their velocity better, even though they might start at slightly lower speeds. The 338 can be fitted into shorter and less costly actions, which is why so many shooters choose the 338 over the 375. And the 338 will do things 30-caliber rifles only dream about, having a significantly greater amount of power at any range.

For this test we look at two of the currently available 338s that come with iron sights. We found there are not many of those on the market. The Winchester Model 70 Alaskan ($1270) and the Ruger Model 77 Hawkeye ($1099) were our choices. We tested them with Remington 225-grain Core-Lokt, Hornady 225-grain SN, and with a handload featuring the 210-grain Barnes X bullet. Here's what we found. 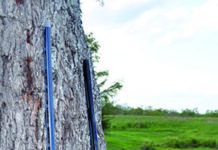 Range Gear estaff - November 14, 2012
New and improved are common phrases bounced around in the shotgun market as a promotional effort meant to inspire shooters into rushing through the doors of their nearest firearms dealer with cash in hand. Sometimes the advertising rings true, and other times the buyer is left disappointed. With one of the latest new and improved offerings - the Benelli Ultra Light model billed as the lightest semiautomatic shotgun on the market - the Gun Tests team followed the example of the great state of Missouri and asked the Benelli to Show Me how good it was.We selected a 28-gauge version of the Ultra Light with a price tag of $1,760 and matched the new kid on the block against a 28-gauge version of one of the most venerable semiautomatics in the country - a used Remington Model 1100 picked up for $1,300.In addition to the price difference, the two 28s are poles apart in offering a sub-gauge platform for wingshooting and busting clay targets. The Benelli is more than 2 pounds lighter than the Remington; features an Inertia Recoil system rather than the gas-operated Model 1100 to reduce shoulder shock; and boasts of a new cryogenically treated barrel and chokes for cleaner shooting and tighter patterns.In support of the Remington are more than 40 years of service to 28-gauge shooters on both clay target ranges and dove or quail fields as the best-selling semiautomatic in America. More than 4 million of the Model 1100s have been sold - a testament to the shotguns popularity.We put the two shotguns through their paces on some South Texas mourning dove hunts and a few sessions of sporting clays to see how the youngster fared against the veteran, and to see how the Benelli lived up to its new and improved advertising.Test ammunition included Winchester AA Super Sporting Clays loads of 3/4 ounce of No. 71/2 shot with an average muzzle velocity of 1300 fps; Rio Game Loads with 1 ounce of No. 71/2 shot and an average muzzle velocity of 1200 fps; and B&P Target loads with 3/4 ounce of No. 71/2 shot with an average muzzle velocity of 1280 fps. The Winchesters were used for clays and patterning, while the Rios and B&Ps were the dove loads of choice.We patterned each of the shotguns with Improved Cylinder and Modified chokes and fired the Winchester ammunition at a 30-inch circle set up 30 yards downrange. The results were as advertised by Benelli, with the Ultra Light producing denser, more uniform pellet strikes with both chokes.With both chokes, the Benelli punched 233 holes in the 30-inch pattern (the average number of pellets in the Winchester shells was 270) and the improved cylinder pattern had only two 3-inch holes between hits. The modified choke left only four 3-inch holes, mainly in the outside of the circle with a very solid pattern in the 20-inch center of the target. A very acceptable 50-50 pattern, with an equal number of hits above and below the center of the target, was produced by both chokes.In the Remington testing, the improved cylinder choke also produced 233 hits, but with six 3-inch holes all over the pattern; and the modified results were even worse with 249 hits and seven 3-inch holes. On the plus side, the Remington also spread out the hits in a 50-50 pattern.Concerning the recoil factor, no semiautomatic 28 gauge worth its salt will smack the shooters shoulder with the authority of a larger 20 gauge or 12 gauge. Both of these shotguns were a pleasure to shoot, with little felt recoil from either model. At best, the recoil factor was a tie between the new lightweight Benelli and the heavier veteran Remington.With this knowledge and confirmation of the Benellis advertising under our belts, we took the two 28s into the field for some quality time with birds and clays. Here is what we found on the ranges: 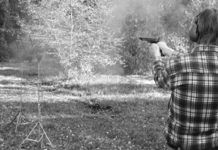 Reliability and velocity are two prime considerations when choosing a propellant for your flintlock or percussion gun. Which of these products should you pour into your powder horn?

Range Gear estaff - May 23, 2004
Over the past few years weve used a trio of powerful scopes on our test rifles. In our view, Weavers relatively inexpensive model is a better buy than similar glass from Leupold and B&L. 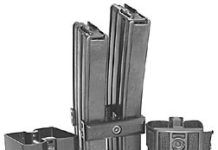 AR-15 Mag Couplers: Double the Trouble, or Half the Reload Time?
recently purchased and tested three different magazine couplers designed to join two AR-15 magazines together as a high-capacity unit. From Brownells, (800) 741-0015, we ordered the First Samco Mag Coupler, $9.99, a one-piece reinforced polymer bracket; Buffer Technologies's MagCinch, $19.95, which works by combining a polymer clamp with nylon straps; and the Mag Grip, $24.98, a machined-aluminum clamp.

[IMGCAP(1)]Beyond the obvious advantages of putting more rounds at our fingertips, putting two mags together on the gun would, we thought, subtract weight from the belt, making room for other necessary items, an... 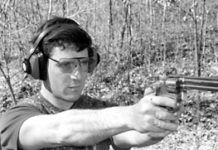 Most shooting glasses are really designed for tracking moving targets, and that translates to the shotgun sports: trap, skeet, and sporting clays. But many rifle and pistol enthusiasts shamble over to the scatter-gun ranges now and again. Even if you're peering over your sights at a stationary piece of paper 100 yards away, anything that enhances the image is welcome, to say nothing of the importance of eye protection.