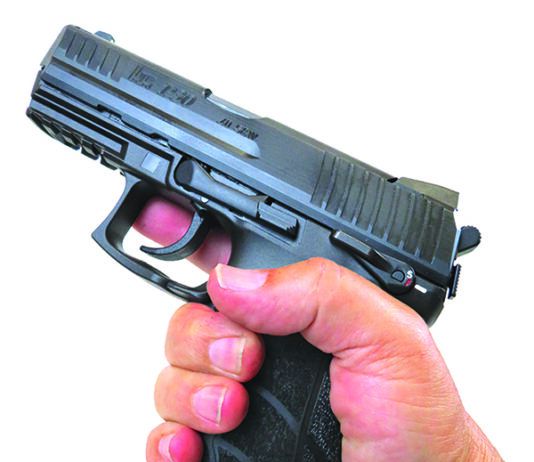 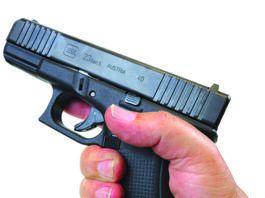 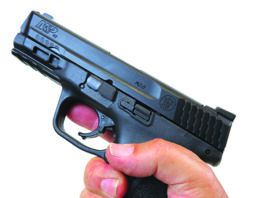 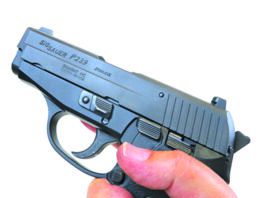 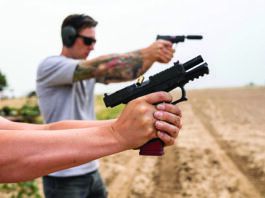 We've recently had a chance to shoot two guns one .22 LR pistol and a pricey over-under 12 gauge against guns we've already tested.

Likewise, we tested two midrange-price sporting-clays over/unders in the November 2006 issue: the Blaser F3 Competition Sporting, $5195; and Beretta's 687 EL Gold Pigeon II Sporting No. J687526, $5495. Against the two original test guns we pitted the Caesar Guerini Maxum Sporting, $4950, to see how it stood up. 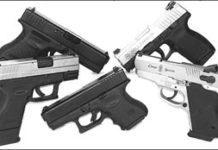 Big-Bore Sub-Compacts: We Test a Quintet of Good Guns

Pistols estaff - December 13, 2006
Big guns may be the stuff of movie legends but in the world of the CHL (concealed handgun license), smaller pistols are more likely the stars. We recently tested five smallish guns that shoot big bullets: They were the $566 .40 S&W Springfield XD40 SC HC, Glocks $614 .45 GAP Model 39, and three others chambered for .45 ACP. 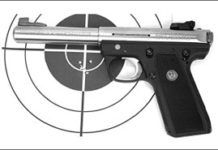 Pistols estaff - December 13, 2006
In this test we will look at two .22 LR pistols that are well within reach of the youthful beginner. The guns in question were the Ruger 22/45 Mark III No. KP512MKIII, $398; and Brownings Buck Mark FLD Plus Rosewood UDX No. 051429490, $417. We wanted to know if these guns were accurate and reliable enough to provide the beginner with valuable training and keep an experienced shooter interested.We tested each pistol for accuracy at American Shooting Centers, a public outdoor range in Houston (amshootcenters.com), and performed additional tests for endurance and reliability at Top Gun (topgunrange.com). Our choice of test ammunitions were Remington 36-grain brass-plated hollowpoints, CCI Green Tag 40-grain Competition Ammunition, and Federal American Eagle 40-grain solids. Both guns ran reliably with the Remington and CCI ammunition, but each gun had difficulty cycling the slower Federal rounds. Despite each gun suffering the same malfunction with the Federal American Eagle ammunition, we were able to record an adequate number of groups and complete our tests. Lets see what we learned. 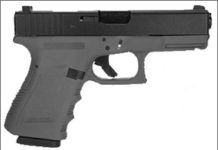 Pistols estaff - November 20, 2006
The Model 23 is the midsized model in the Glock lineup. It follows the same design and configuration as all the other Glock pistols, the majority of which feed from a double-column magazine.

A Trio of Pocket .380 ACPs: Steer Clear of NAAs Guardian

Whether or not the .380 ACP cartridge is your cup of tea, it exists in large numbers of available handguns today. Some of today's most modern ammunition make this cartridge a better one than it was, say, 30 years ago, but we would still not consider it for a main defensive weapon because we feel there are better caliber choices. Even the .45 ACP can be had in small packages.

We decided to look at a few of the .380 pocket pistols available, never mind the relative worth of the cartridge. After all, in a life-threatening situation any firearm is better than none, and a small, pocket-size gun is often more likely to be carried than anything bigger. We got a PPK Walther ($543), now being made in this smaller configuration by Smith & Wesson. The tiny North American Arms Guardian ($449) was the choice of one of our testers, despite the gun's being DAO. And the somewhat larger Beretta 85 FS Cheetah ($575) was also put up for consideration. Do these little .380s kick? How accurate are they? How easy are they to shoot fast? In this evaluation we looked hard at each gun's ability to make fast and reasonably accurate hits, but as always, we shot ‘em for group.

We tested with two types of hardball, CCI's Blazer and Brazilian Magtech, both with reloadable brass cases. We also used Cor-Bon's 90-grain JHP loads. We also tried a few groups with Federal's Personal Defense Hydra-Shok 90-grain JHP and Miwall's 88-grain JHP but didn't include these in the official results.

For the rapid-fire evaluations, we began with the gun in hand, and from a range of seven yards, brought the gun up and placed a shot onto a sheet of paper 8.5 by 11 inches in size. This was repeated until we got a good feel for each pistol, shooting each gun in the double-action mode. Then we tried each gun with two fast shots, which meant the Walther and Beretta were fired DA/SA, but of course the NAA Guardian was DA for both shots. We used these tests as a simple but practical evaluation of each gun's "combat" potential. We recommend the reader do similar testing if he buys such a gun with self defense in mind. Here's what we found. 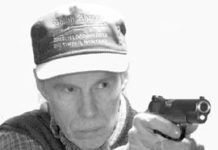 Anyone who has a 1911 .45 ACP might well feel he has the ultimate self-defense handgun, and there is much evidence he may be right. But some will not be satisfied with that power level, never mind that it does the job most of the time.

Also, there is at least one complete gun that offers a purported step up in ballistics, the Guncrafter Industries .50 GI ($2895) Model No. 1 pistol, which is a 1911 dedicated to a .50-caliber cartridge with a rebated rim. The ammunition for all three test calibers was proprietary but easily obtained, as we discovered. Here are our findings. 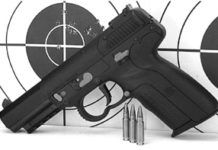 Guns and Accessories Reviews: FN, Remington, and Others

The Five Seven pistol is lightweight and accurate, and we like it, though it shoots the small 5.7x28mm cartridge. For rifle-accuracy upgrades, check out Don Bower's handiwork. 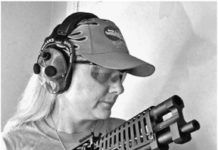 We Test Two AR-Style Pistols from Bushmaster and OA 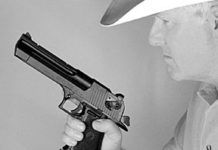 For some people all that a gun needs is charisma, mainly due to its appearance in a number of Hollywood movies. If the Minneapolis-based firm of Magnum Research has achieved nothing else, then the Desert Eagle's place in history has been assured by its striking profile and big hole in the muzzle. 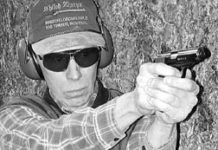 The more powerful 9x18 import surplus gun is our pick, but there were no bad apples in this small-gun matchup. 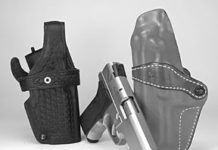 One of the alternatives to the high cost of a new pistol is to buy used. In lieu of finding a creampuff that was only fired by a little old lady on Sundays, one source of used pistols is the police trade-in market. Through firms like Interstate Arms (978-667-7060), pistols formerly owned by active law-enforcement personnel are available to dealers at a wholesale price. The catch for the typical consumer is that a dealer, i.e. an FFL holder, must arrange for transfer. This also means that retail price can vary according to fees, typically 10 to 15 percent of the gun's cost with a $25 minimum. The prices we list are a dealer's cash price, or the prices we paid to get the guns without FFL fees.

Keep in mind, however, that not every dealer is willing to go through the hassle of ordering a gun of unpredictable condition which may result in you rejecting it, which can cost return shipping charges and possibly a re-stocking fee. Be that as it may, we decided to order four .40 S&W pistols that have been commonly found in uniformed service. They were the Ruger KP94DAO, the Glock Model 22, Smith & Wesson's Model 4046, and the SIGArms P229.

We felt buying these guns was a calculated risk. We were able to ascertain their age by checking the serial numbers with the manufacturers. New, each pistol was good enough to be chosen for police departments nationwide. But why were they traded in? Did the design of these pistols become outdated or were they beginning to show their age with more evidence than mere holster wear? Let's look under the hood and take them for a ride. 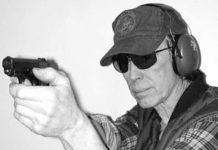 Pocket Pistol Pair-Off: We Test A Set of .380 Surplus Handguns

The .380 cartridge has been around since early in the last century. It was another of John Browning's designs, and has been known as the 9mm Kurz, 9x17, 9mm Browning Short, and .380 ACP. We also know it as the .380 Automatic, or simply the .380 Auto. It's been chambered in a host of small autoloading pistols, some of them quite famous, such as Walther's PPK.

The .380 is not a cartridge many of us would pick for all-around use. It's hardly a plinking cartridge, because of the relatively high cost of ammunition, and because the pistols that chamber it are generally not all that accurate. Reloaders don't exactly flock to the diminutive cartridge, for a variety of reasons. Ammunition manufacturers have produced some excellent fodder in recent years for the tiny guns, but none of it can make a mountain-size "stopper" out of the molehill .380 Auto.

Guns for the cartridge abound, some of them expensive, some of them — like the ones tested here — discontinued for a variety of reasons. Some .380s are great firearms, and some would make better table lamps. We acquired four examples of discontinued .380-Auto handguns, all of which pop up on the used market from time to time. They were all locked-breech pistols, with barrel locks similar to that of a full-size 1911 .45 Auto. Our test guns included the Colt Mustang and its lighter twin the Mustang Pocketlite, both of which cost in the $500 range; an Iver Johnson Pony ($250) that was similar in size and overall shape to the Colts, and a close clone of the Pony from Firearms International ($300). Here are our findings.