Back in April 2006 Gun Tests magazine tested three .380 ACP pistols, one of which was the Walther PPK, as made here in the U.S. under license by Smith & Wesson. They loved the well-built little PPK, even though it had to go back for rework before they gave it a clean bill of health. It had failed in DA shooting, but a stiffer spring gave it the equivalent of their Grade A appraisal. They recently found a gun that looked a lot like the PPK, the FireStorm by Bersa ($307 MSRP), from Argentina. Here’s what they found.

Their first impression of the Argentine-made FireStorm was that it sure looked like a PPK. The lines were mighty similar, but the finish in this case was all business. The entire gun was matte black except for the white marks on the huge sights and the red dot under the safety lever. The finger-grooved, hard-rubber grips gave excellent traction and good control to the gun. They thought the magazine extension was an important part of the grip. It would help get the magazine out of the gun if the mag happened to stick, and also provided a good rest for a finger.

The sights were very good. The front blade was thick and prominent, with a slightly sloped rear face that held a huge white dot. They’d have liked more room between the sides of the front blade and the edges of the rear notch, but this setup worked. The rear was dovetailed into the slide with no provision for elevation adjustment. The rear-sight notch was outlined with a highly visible white band. The FireStorm had a smooth front face to the rear sights to permit practicing clearance drills without having to visit the doctor. In fact, the gun was free of all sharp edges where it counts.

The FireStorm’s controls were a bit more complex. The hammer could be easily cocked, and that’s advisable if you have time. The safety was on the left side of the slide. In front of that, and slightly below, was the slide release. This popped up to lock the slide back when the gun ran dry, and could be used to lower the slide after inserting a loaded magazine.

On the right side of the frame near the front of the trigger guard was the takedown lever. When turned downward, this permitted drawing the slide back far enough so that its rear end could be raised, and then the whole works could be eased off the front of the barrel, much like the PPK’s system. Most of the testers preferred this setup.

The left side of the frame also held the magazine release. The magazine held seven rounds. Only one magazine came with the gun. Extras are $27. There was also a key-lock for the frame, located on the left just above the trigger pivot. This was for those who feel a need to secure the gun from firing in a positive manner. The gun would not shoot with the magazine removed.

Inside the FireStorm they saw decent workmanship throughout. There were some sheet-metal parts in the Bersa where other guns used machined pieces. The Bersa never failed to feed during the testing. The Bersa also had an automatic firing-pin lock that required the trigger to be fully pressed before the pin could reach the primer, much like the unit found on recent Colt 1911s.

The FireStorm was normally double action for the first shot, if you’re in a hurry. There was no way to get around that, because applying the safety—which took significant effort—would drop the hammer. So carrying the gun cocked and locked was not possible. The FireStorm’s DA pull started out soft, then increased in force—commonly called “stacking”—and then broke cleanly at about 10 pounds. With a little practice they found the DA pull to be highly workable. However, the second shot is always single-action, and shooting fast pairs requires thorough familiarization. Most seasoned shooters don’t much like that state of affairs.

Gun Tests Report Card: At 20 ounces the FireStorm weighed 10 ounces less than similar guns. Still, recoil was not a problem even with the Cor-Bon loads. The excellent grips made the gun easily controllable and comfortable. They had no failures of any sort with this handy little gun. It shot to its sights for elevation with the hardball, and the Cor-Bon loads landed a touch higher. The groups were an inch or so to the right, indicating the need for a slight drift of the rear sight to the left. This gun was more friendly to smaller (female) hands, and also a lot lighter and much more easily concealed than others. The single-action trigger was mushy, but there was some final creep before the break. You could lock the slide back without using an empty magazine, and of course reloads are faster because of the slide-lock lever. They liked this gun a lot, and they thought everyone would, too. 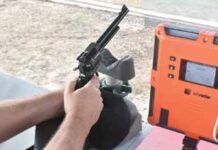 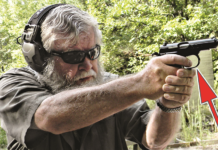 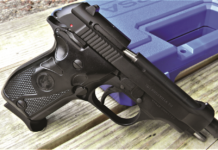