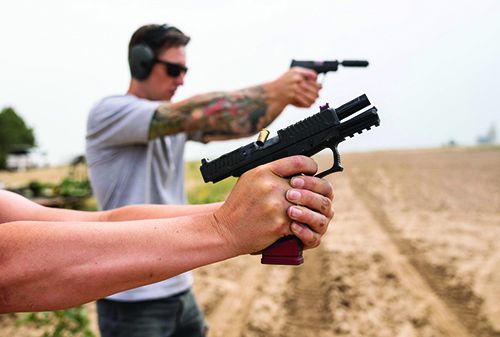 The extension kits include assembly screws and compatible springs for the +5 extension. The +3 kits are OEM spring compatible. A 3/32 Allen key is included as well.

With the modularity of Faxon’s design, proper disassembly will not require any destruction of the spring to remove the extension. When assembled, screws should be torqued to 12 to 15 inch/pounds.

The extensions are machined from 6061 T6 aluminum with a type 2 anodized finish.

Aaron Meidinger, Faxon design engineer, said, “If you’re like me, the idea of permanently modifying your firearms and accessories is intimidating. Any change that isn’t reversible means you might have to buy another one if it doesn’t pan out the way you wanted. You can swap between +3 and +5 in seconds, mix and match colors to boost the look of your build, and even return it all to factory without having to destroy your magazine spring, like with other extensions.” Price: $50 to $75.

Barnaul, which makes steel-case ammunition, is now offering a new subsonic cartridge in 9mm Luger for use with suppressors or for shooters competing in Minor Power Factor divisions.

The new Barnaul 9mm Subsonic ammunition follows the path of the manufacturer’s original Silver Sport line of Minor Power Factor ammo developed for IPSC competition, but with a key change. The new ammo incorporates a slightly heavier 151-grain FMJ bullet versus the original 148-grain projectile. With an average muzzle velocity of 850 fps, the Barnaul 9mm Subsonic delivers a power factor of 128.35 from a 4.7-inch barrel, placing it just above the 125 PF minimum adopted by most shooting organizations for the minor power classes.

In addition to the new bullet weight, the Barnaul 9mm Subsonic continues with a bi-metal jacket and a steel cartridge case. To ensure cycling in the reduced-power load, both the FMJ bullet and the case feature zinc coatings for enhanced lubricity.

SDS Imports of Knoxville has announced the PX9-G2 9mm pistol to replace the PX9. Building on the design of the Gen 1, the PX9-G2’s 9mm hammer-forged barrel and slide come standard with a polymer frame, adjustable sights and forward slide serrations. The PX9-G2 makes use of industry-standard accessories, such as S&W M&P 2.0-style sight dovetails and SIG P226 magazines.

The PX9-G2 features a light rail, ambidextrous safeties and magazine release. Interchangeable side panels and backstraps allow 27 different grip configurations, and users have the option of using a removable magazine well.

The SDS PX9-G2 ships with two 18-round magazines, cleaning kit, holster and owner’s manual in a lockable hard case.

SDS executive David Fillers said, “We’ve worked closely with Tisas, the manufacturer of the PX9’s, to develop the G2 version for the U.S. market, and look forward to continuing this partnership and building on the success of the original PX9.”

The latest firearm we’ve tested from this importer was the Tisas 1911 Duty B45 45 ACP, $449, which earned a B grade and Best Buy recommendation in the July 2021 issue. For more information on the PX9-G2 and other SDS products, visit SDSImports.com.

HEVI-Shot’s non-toxic tungsten waterfowl loads are now available in new HEVI-XII loads that allow bird hunters to shoot three shot sizes smaller than you do with steel ammunition and get the same lethality. 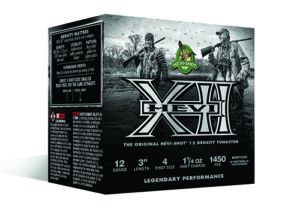 HEVI-XII is 53.8 percent denser than steel, so waterfowlers can fire smaller and more dense pellets that form a tighter pattern. The company is based in Sweet Home, Oregon.

Blaser is now offering its R8 modular rifle in a 6.5 PRC chambering. The 6.5 Precision Rifle Cartridge is essentially a magnum version of the 6.5 Creedmoor, with a flatter trajectory and higher impact velocity. The R8 is available in numerous calibers from 204 Ruger to 500 Jeffrey.

The R8 is a straight-pull bolt-action rifle an array of stock options, a recoil reduction system, adjustable comb, adjustable length of pull, and numerous barrels and bolt heads to facilitate quick conversions to different calibers.

Jason Evans, CEO, Blaser Group said, “The interchangeability makes it incredibly easy to convert your rifle from one caliber to another by simply switching out the barrel and bolt head.“

The Blaser Group is the official U.S. importer for German firearms brands Blaser, Mauser and J.P. Sauer; English gunmaker John Rigby & Co.; and Minox optics and Liemke Thermal Optics. Established in 2006, the company is based in San Antonio.

Taylor’s & Company of Winchester, Virginia is offering a new takedown rifle, the TC86 Takedown lever action in 45-70 Government. Price is $1840. The TC86 Takedown blends the classic lines and function of a Winchester 1886 and adds modern functionality with a 5⁄8 x 24 threaded 16.5-inch barrel and oversized lever loop.

The rifle features a case-hardened steel receiver, a checkered walnut stock and forend, and a Weaver rail sight with a Skinner peep sight on it. A rubber buttplate absorbs recoil of the 45-70 Government.

The lever rifle’s takedown action disassembly is the same an original 1892 takedown disassembly and has interrupted threads on the receiver to allow removal of the barrel. To take down the rifle the action must be levered open, the disassembly lever on the magazine tube used to unscrew the tube until it is free from the receiver, then while holding the tube slightly up from the action, twist the barrel 90 degrees so that it is perpendicular to the receiver and remove.