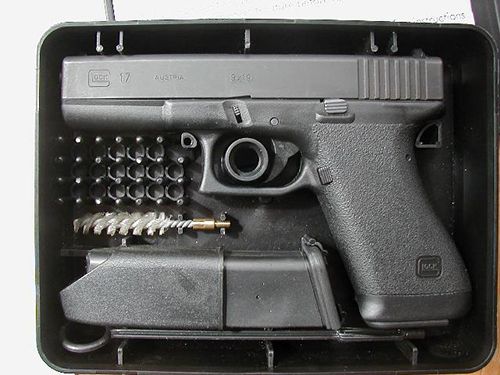 If you’re confused about how generations of Glocks have differed over the years, Scott Fuller, Product Tech head at CheaperThanDirt.com, posted a concise history of the changes.

In 1963, Gaston Glock founded a plastics company near Vienna, Austria. His moderately successful company primarily manufactured plastic curtain rod rings along with various other plastic products. Soon, Mr. Glock realized the strength and durability that could be realized by combining plastic and steel for particular military products, and he began supplying the Austrian military with various tools and components. When two military Colonels were visiting in 1981 to oversee the manufacturing of plastic grenade components, Mr. Glock overheard the military officials lamenting the fact that no one could manufacture military pistols that would meet their specifications.

Mr. Glock interjected, saying that he could produce the pistols. The military men laughed at him. But Gaston Glock was not someone who tolerated being laughed at. He immediately set to work in his basement designing a pistol that would not only meet but exceed the requirements of the Austrian military. Glock had no experience building pistols before, but if you asked him, that was an advantage. Despite their inexperience in manufacturing small arms, Glock was nevertheless invited to participate in the bidding process. Glock’s revolutionary design so impressed the military evaluators that in 1983, the Austrian army ordered 25,000 Glock pistols. In 1985, Glock established a factory in Smyrna, Georgia, so that they could better serve the United States firearm market. The Glock 17 became enormously popular in the United States and was readily adopted by law enforcement agencies.

Around the same time, GLOCK developed their second model handgun, the G18 machine pistol. The G18 was based off of the G17, but had a selector switch on the back of the slide that allowed the firearm to fire in semi- or full-auto. Because of its small size and extremely high cyclic rate (1,200 RPM), the G18 was never widely used. Glock’s popularity increased demands from consumers for a compact model that could be easily concealed. In 1988 Glock released the G19, a compact 9mm. Despite the smaller frame of the G19, it still had a 15 round capacity. It was around this time that Glock also built a plant in Hong Kong to meet demand from Southeast Asia, as well as a second factory in Austria.

Soon, Glock released their big bore models: the G20 and G21 in 10mm and .45 ACP, respectively. These large pistols gained a huge following from American consumers who valued them for their large caliber stopping power. When the FBI developed their .40 caliber round with Smith and Wesson, Glock answered in 1990 with the G22 and G23. The G22 was a full sized .40 caliber handgun, and the G23 was the compact model. Later that year a fourth Glock factory was opened in South America to better serve markets in Brazil and the rest of Latin America.

When the Glock pistols were initially released, rumors about the guns were rampant. One rumor was that Glock pistols could pass undetected through airport metal detectors. These rumors proved totally fictional.

While the Glock Safe Action Pistol consists of over a pound of steel, the “Combat Tupperware” nickname comes from its frame being almost completely made of polymer.

The Glock Model 17 was adopted into service with the Austrian police and military forces in 1982 as the P80, and has since been considered the world’s and the United State’s premier duty sidearm.

The Glock has had many evolutionary changes over the past 28 years, with the major model changes identified as “Generations”. Glock is currently producing its fourth generation of pistols in a range of model lines.

The Glock has had many evolutionary changes over the past 28 years, with the major model changes identified as “Generations”. Glock is currently releasing its fourth generation pistols all along its model line.

The 1st Generation Glock, as it came to be known, was introduced to the US market in 1984. The Glock pistols continued their rise in status and production with very few changes. Glock did switch to a captive recoil spring fairly early in the pistols life and at one point the serial number became stamped on imbedded steel plates in the pistol’s dustcover.

In 1988 Glock added checkering on the front and back straps on all its models. In 1990, the locking block was enlarged and an additional cross pin was added on the non 9mm caliber models.

In 1998 Glock changed the frame substantially. An accessory rail was added, officially known as the “Universal Glock Rail”. Thumb rests and finger grooves were added, the extractor was changed to also function as a loaded chamber indicator and the OD color was added to the lineup. In 2002 all 17, 19 and 34 models started using the larger locking block and additional cross pin to simplify production.

In 2009 at SHOT Glock introduced the Model 22 RTF2 with a pyramid grip texture and scalloped slide serrations. It is still considered a 3rd generation gun. Glock produced the RTF2 in models 17, 19, 22, 23 and 23C. Around mid-2010 Glock dropped the crescent shaped slide serrations and started using the standard slide serrations on the RTF2 models. As of January 2011 the RTF2 Model Glocks were available only to Law Enforcement.

In January 2010 Glock debuted the latest and greatest version of the Glock Safe Action Pistol. The big changes are a smaller grip circumference with add on backstraps, a captive dual spring recoil assembly, a truncated pyramid grip texture and a larger, reversible magazine release. These changes are accompanied by smaller changes in the barrel, slide, trigger bar, trigger housing, the deletion of cutout on the front of the grip for magazine removal, and the additional notch on the magazines for left-handed magazine release.

See all of the latest Glock products on its website. And be sure to refer toGun Tests‘ dozens of reports on Glock models from over the years to get a full scope of the brand’s contributions.