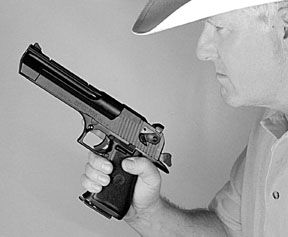 Most often, powerful cartridges are chambered in revolvers, but not always. We recently tested two very big pistols that fire .44 Magnum and .44 Auto-Mag rounds, both of which develop more than 900 foot-pounds of muzzle energy.

In the $1,249 Magnum Research Desert Eagle .44 Magnum, we have a pistol that was built to chamber a straight-walled case with a rim meant to be settled on the edge of a cylinder. In the .44 Auto-Mag, which we shot in a $1,550 test gun from Wildey called the 44-10 Survivor, we find a case that is grooved for an extractor so it can be plucked from a magazine.

We wanted to find out what these guns were designed for and to see if they fulfilled their missions. One thing was for sure; our presence at the range would not go unnoticed.

For some people all that a gun needs is charisma, mainly due to its appearance in a number of Hollywood movies. If the Minneapolis-based firm of Magnum Research has achieved nothing else, then the Desert Eagle’s place in history has been assured by its striking profile and big hole in the muzzle.

Although Magnum Research currently produces a lineup of smaller pistols similar in design to the CZ pistols (the Baby Eagles), and huge BFRs (Biggest Finest Revolvers), not to mention an excellent 10/22-style rimfire rifle and a single-shot hunting handgun, the Desert Eagle is perhaps their crown jewel. The Desert Eagle catalog features upgrades in finish, grip material, sights, scope mounts, extra barrels, holsters and presentation cases. Frankly, the list is quite long.

But our big black pistol was a basic Mark XIX with 6-inch barrel and standard black finish. Although this gun is built on a U.S. patent registered in 1986, it is actually a product of Israeli Military Industries, LTD. or, I.M.I. The Desert Eagle .44 Magnum is a gas-operated semi-automatic pistol fed from an eight-round single-column magazine. The barrel does not stay absolutely fixed in place during cycling, nor does it shift and float like in the Browning design. As per the owner’s manual, “Prior to firing the bolt is locked by three lugs in the barrel assembly. Upon firing, propellant gases pass through a hole underneath the bore of the barrel into the gas cylinder and push the piston, which in turn moves the slide backwards. During this movement the bolt is unlocked and carried to the rear by the slide, but not before, the pressure in the chamber is reduced.” The continuing movement of the reciprocating parts takes care of tossing the spent case and loading a fresh round from the magazine.

Desert Eagle pistols were actually designed to be chambered in nastier calibers than .44 Magnum. Models chambered for 440 Cor-Bon and 50 Action Express are the real “Terminators,” but some of those guns’ heft carries over to this product. The weight of this pistol, combined with the gas operation, made shooting .44 Magnums quite bearable. If we could change anything, it would be to either make the grip shorter from front to back or make our hands that much larger. Of course, the determining factor is the length of the ammunition housed in the grip. Perhaps we will see a smaller version of this gun one day chambered for 44 Special.

Our Desert Eagle came with two eight-round magazines. Extra magazines are available for $45 each. A 10-inch barrel is available for $459. This sounds expensive, but keep in mind that all barrels, even the 6-inch standard model, comes with a Weaver-style mount machined in plus a front-sight blade dovetailed in. To change out the barrel or break the gun down for cleaning, all you have to do is release the magazine, empty the chamber and push the button on the left side of the frame while turning the lever found on the opposite side of the frame. The barrel, complete with sight rail and lugs, slides off easily without any springs or latch work dropping free.

Our Eagle came with a rear sight that was adjustable for windage only (via drift), but an adjustable unit is available as well as different size front blades. The trigger is single action only with ambidextrous safety levers mounted on the slide. The face of the trigger was broad and smooth. The beavertail is quite large, but it lacks a grip-safety system.

We found that all three of our test rounds were capable of printing five-shot groups measuring less than 3 inches on average. Our two rounds from PMC, the 180- and 240-grain JHPS rounds, averaged 2.5 and 2.9 inches respectively. The Cor-Bon 240-grain JHP shot average groups measured at 2.5 inches as well. The Cor-Bon also helped us land the smallest single group of the test, 1.6 inches. Accuracy might have been significantly better had the supplied sights been spot on. As delivered, our Desert Eagle was printing groups well below our point of aim. We were forced to compensate with a visual adjustment, dropping the point of the front sight deep into the rear sight notch.

The Cor-Bon round produced a remarkable 1198 foot-pounds of muzzle energy, but when the round was fired from the big Desert Eagle, our shooters did not feel taxed. Taking note of the spread between the smallest and largest groups regarding the Cor-Bon, we would conclude that accuracy from the Desert Eagle leans heavily on the shooter controlling the sights and following through. We think anyone bent on shooting this weapon should take advantage of the built-in Weaver base and mount a scope or some other optic or red-dot sight (in the latter case, with a smaller dot, 4 MOA or less). In our opinion, the Desert Eagle .44 Magnum is capable of shooting very accurately out to 50 to 75 yards. With the right scope and careful choice of ammunition, we think accuracy of 2.5 to 3 inches per group at 50 yards should be in reach of most shooters.

The Wildey Survivor pistol is available in .44 Auto-Mag, .45 Winchester Magnum, .45 Wildey Magnum and .475 Wildey Magnum. Available barrel lengths range from 5 to 18 inches. Each of these guns is a wonder to look at. The Wildey shop in Brookfield, Connecticut, designed these guns for hunting and steel silhouette competition.

The Survivor model we acquired featured a satin finish to its stainless steel construction. The Hunter model is the very same gun but is rendered with a matte finish instead. The grips were checkered wood panels. From the trigger guard back the Wildey Survivor looks like a 1911 style pistol with palm swell mainspring. There are slide serrations to the rear and adjustable sights. But forward of the trigger guard, a long 10-inch barrel without shroud was connected. This gun was gas operated, and there was a ribbed collar where the barrel joins with the frame that can be turned to adjust gas flow. This was meant to assist function throughout the use of different strength ammunition that offers varying amounts of pressure.

A long ventilated sight rib connected the rear sight to the front sight. The trigger was hinged and this gun can be operated via single or double action. On the left side of the frame just above the beaver tail was a safety lever. When this lever was switched parallel to the bore, the hammer will strike the firing pin. Moved downward to the 8 o’clock position, the hammer was decocked but prevented from striking the firing pin. Nevertheless the hammer can still be raised by pressing the trigger. However, the falling hammer will still not strike the firing pin.

We didn’t like the positioning of the safety because it interfered with the thumb position of the strong hand (for the right handed shooters). Some of our staff accidentally activated the safety in fact. The beavertail was sculpted and machined, but not to our liking. Its sharp edges hurt the webs of our hands, and we resorted to wearing thick gloves. Actually, we found handling the Wildey Survivor to be unpleasant. Many of the edges were sharp or unnecessarily square. This included the edges of the frame, the slide, and the sight rail plus the side-release and safety levers.

In the profile of the swelled mainspring housing is the magazine release. Pushing the magazine release to the rear lets the magazine drop. The magazine was designed to hold six rounds, but true to the warning from the manufacturer, the gun only ran reliably when capacity was limited to five rounds. The trigger of the Wildey Survivor will not operate unless a magazine is inserted. This limited our dry-fire practice, especially for double-action fire. As a result we concentrated on firing single action only.

The felt recoil was expressed more as a push straight back, while simultaneously lifting the gun slightly off the sandbags.

One inherent problem with this unusual chambering was the lack of ammunition. Wildey is currently loading ammunition for this gun, but the sample 50-round plastic box they supplied did not list any specifications about the cartridge. We dismantled one of the Wildey rounds and weighed the bullet and the powder on an RCBS beam scale. We were unable to identify the propellant, but we weighed the charge to be approximately 15 grains. The JHP bullet weighed 200 grains. We also fired 240-grain JHP rounds from Cor-Bon, to our knowledge, the only commercial loader providing ammunition for 44 Auto-Mag weapons at this time. The amount of power available from these rounds was outstanding. The Cor-Bon ammunition left the Wildey Survivor at an average velocity of 1680 fps as per our Oehler 35P Chronograph, ($350 from Oehler Research, 800-531-5125). This computed to average muzzle energy of 1505 foot-pounds, or more than three times as powerful as a very hot 185-grain .45 ACP load. We were able to control the Wildey only after donning a well-padded PAST shooting glove, ($21 from Midway USA, 800-243-3220). Our best efforts resulted in groups in the 3.5-inch range at 25 yards. We hardly think this is acceptable for a $1500+ hunting gun. Furthermore, the gun kicked spent cases straight back at the shooter, which we found distracting at the minimum. Also, its accuracy and reliability would come and go. Before long, the magazine would not stay put. It would drop out and fail to feed the next round.

Magnum Research Desert Eagle .44 Magnum, $1,249. Buy It. With so many big revolvers available, this gun may provide more novelty than any hunter will need. But it did carry more .44 Magnums than any other available handgun, softened recoil to a tolerable level, and it was a heck of a lot of fun to shoot.