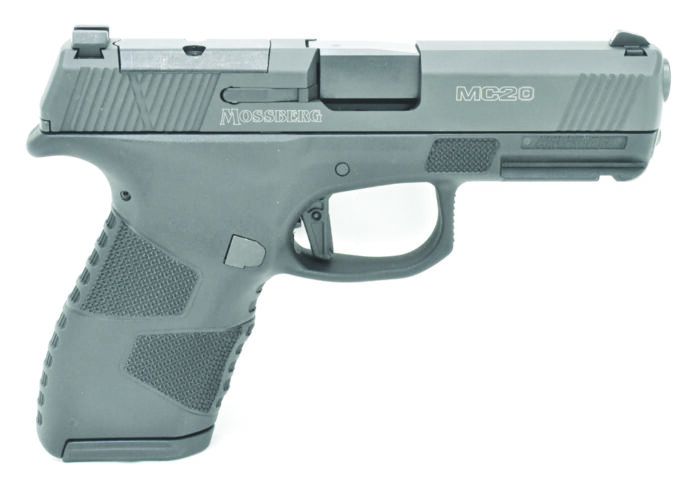 We recently tested four new or newish 9mm polymer-frame pistols that use mostly proven designs and come in at affordable prices. The first member of our new group is the Savage Stance, $408; followed by the SCCY-DVG-1, $255, a new optics-ready model that we covered on the Gun Tests YouTube page in January 2022; the very new Mossberg MC2c, $380; and the latest introduction, a SAR USA SAR9 Compact X, $631, which was announced in April 2022. How well do these affordable pistols work in an everyday-carry environment? Well, when we shot them head to head, we found some were more accurate than others, and even more important, some were more dependable.

Your eyes do not deceive you about the maker of the first pistol, the Savage Stance. Savage! Savage, you say! What does Savage, the maker of great rifles for more than 100 years know about pistols? Quite a lot, actually. Savage was one of the two finalists in the military trials that eventually accepted the Colt 1911 submission as the winner. A scaled-down version of that pistol was produced from 1907 until 1920. It featured a 10-round double-stack magazine almost 30 years before the famous Browning Hi-Power. Now, a mere century later, Savage is back in the pocket-handgun market with a fascinating entry.

SCCY (pronounced sky, as best we can determine) is out of Florida, and the company has a reputation for producing relatively simple, affordable, and effective firearms. We tried out their new optics-ready DVG-1 model to find out for ourselves. The DVG-1 departs from previous models in that it is striker fired, where previous versions were hammer fired. The required changes in leverage and springs can increase the effort needed to retract the slide, but ours did not show that to be a material factor. The other three pistols in this test averaged in the sub 19-pound category where the SCCY required 20.3 pounds of muscle to retract the slide. We did not feel the 7% increase was noticeable.

Next is Mossberg’s MC2c, a modern 9mm semi-auto with a 14-round magazine, which is a great compromise for most small or big hands. It is very similar in size to a Glock 48. There are many very good reasons why different firearms are shaped differently, primarily because people are as well. About the only assumption that can be made on the potential user of a new firearm is that five out of six will be right-handed. For example, one member of this group of testers has long, slim fingers. The rest of us tend to have bigger hands and shorter digits. That means that pistols of a size that work well for him don’t necessarily work for us at all. The Mossberg MC2c handgun seeks to strike a balance that most users will like.

SAR USA is the exclusive U.S. importer for all firearms and ammunition products produced by Sarsilmaz Silah Sanayi of Istanbul, Turkey. Sarsilmaz is one of the oldest firearms manufacturers in the world, being founded in 1880. It would appear that the “X” in the SAR USA SAR9 Compact X name stands for “extras.” Our sample included a nice hard case along with an inexpensive, but functional, mag pouch and holster. The package included a second 15-round magazine with weighted base pad perfect for those of us still practicing El Presidente–type reloads. Also included was a nice, Picatinny rail-mounted LED light. But intentionally, apparently, SAR did not include the battery. Curious. All told, a very nice collection of gear.

We shot the pistols at American Shooting Centers in Houston, firing accuracy groups at 15 yards. We posted multiple five-shot groups from a well-sandbagged Caldwell Pistolero shooting rest, assisted by a Mini DRC Fortune Cookie from Wiebad.com. We obtained velocities in one session using a LabRadar chronograph.

We tested using three different types of ammunition. First was 115-grain Remington Range ammo, along with Winchester White Box 115-grain FMJs. We also tried our standard match reload in the form of 147-grain FMJ bullets from Precision Delta, powered by Hodgdon Tite Group powder and CCI small pistol primers. On a pistol-by-pistol basis, here’s what we learned during our testing:

The Mossberg MC2c starts off with a slide just over 0.9 inch wide by our measurement. It has a flat top and beveled upper edges. The nose has been rounded for easy insertion into a holster. The rear of the slide has 12 angled grasping grooves, and the front adds seven more. The rear deck is already milled for a red-dot optic using the Shield RMS pattern. The extractor is a hinged, external piece that pivots a tab out to serve as a tactile indicator of a loaded chamber. The front sight is mounted in a dovetail and shows a single white dot. The two-dot rear sight is mounted in a dovetail, allowing windage adjustment to the left or right. The rear sight also has a flat front for those one-handed, tactical reloads everyone needs to know how to do for the Zombie Apocalypse.

The back end of the slide shows a substantial difference from a Glock. Unlike our Austrian friend, the trigger on the Mossberg does not have to be released or the striker be forward for the pistol to be disassembled. Remove the magazine on the Mossberg. Check the chamber 27 times to make sure it is unloaded, and lock the slide to the rear. There is a slide cover plate at the rear with a tab that can be depressed in its middle. Depress the tab and slide the cover plate down, exposing the striker assembly. Slide that out to the rear, release the slide forward, and ease it off the rails. No more twin tabs in front of the trigger that have to be manipulated for disassembly.

The polymer frame uses different checkering patterns on different areas. The front and rear of the grip have vertical serrations to keep the hand from slipping to one side or the other. The side panels use raised checkering to keep the pistol seated firmly in the hand. Further inspection reveals a slight palm swell. For those who like indexes for their thumbs in a forward hold, checkered memory pads are located just above the front edge of the trigger guard. The checkered, metal magazine release is single-sided but reversible. The trigger is flat-faced but with the blade safety in the middle, and is set pretty far to the rear. Required trigger compression averaged just over 4.5 pounds, and movement was smooth. The front of the frame also provides a Picatinny rail with a single slot.

Our Team Said: The Mossberg MC2c was second in our accuracy tests with a 2.69-inch group average across all ammo types. It was a close third in the speed drills. It seemed to take us just a hair longer to get that first shot off. Some dry firing and getting used to the grip angle should fix that no problem. Function was perfect.

Testing was done at American Shooting Centers in Houston. Muzzle velocities were determined via a LabRadar chronograph. All shots for group were done from a well-sandbagged Caldwell Pistol Rest from MidwayUSA and aided by a mini-DRC Fortune Cookie bag from Wiebad. Averages were taken for 5-shot groups shot at 15 yards.

Process: Fire five shots from low ready at a 5-inch circle placed at 5 yards. Numbers are averages for two repetitions.

Process: Fire five shots from low ready at a 6-inch by 11-inch A Zone placed at 8 yards. Numbers are averages for three repetitions.