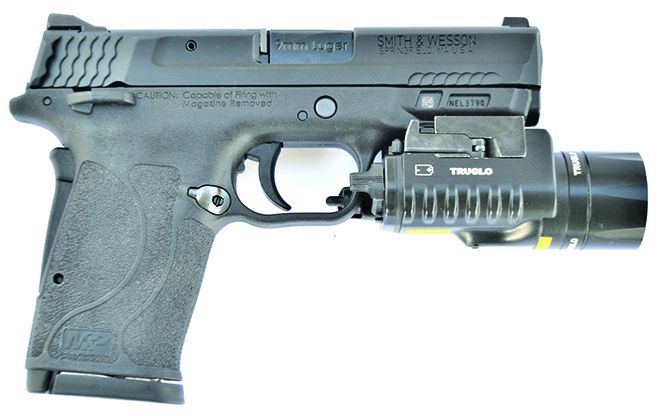 Recently, Federal introduced a new self-defense pistol chambering, the 30 Super Carry. Some may wonder why we need another cartridge, especially when we cannot obtain older cartridges in the quantity and price we need. As a partial answer, the 30 Super Carry is intended to up the ante in power, energy, velocity, and penetration over the 380 ACP. On the other hand, it is intended to perform as closely to the 9mm as possible, with lighter recoil and more rounds in the magazine. We wanted to see if the 30 SC is a neat trick that we could recommend to Gun Tests readers, or is the new round just tricky marketing.

Of course, the 380 ACP and 9mm Luger are well established as self-defense rounds. Compared head to head, the 9mm Luger offers considerable improvement in terminal ballistics over the 380 ACP and is our most widely distributed defense caliber. As such, it is the cartridge for the 30 SC to beat based on performance. On the other hand, for some, recoil is a real concern. So is gun handling and racking the slide efficiently, two aspects where the 9mm Kurz, aka the 9mm Short or 380 ACP, excels. So for those shooters, would the 30 Super Carry offer a viable alternative? To get some data on both comparisons, we looked at the 380 ACP, 9mm Luger, and 30 Super Carry in three nearly-identical Smith & Wesson Shield EZ Rack pistols. We say nearly identical because the markings and weights varied only slightly between the handguns. For all practical purposes, the handguns themselves were identical. We fired them head to head at the range, comparing accuracy and recoil control. We also fired the three calibers in ballistic testing. The difference in sights, handling, and the triggers were minimal. The primary differences were in recoil and bullet performance in water jugs to assess effectiveness on physical targets. Here’s what we found:

Gun Tests Grade: A (OUR PICK)

On average, the 9mm EZ guns are more expensive than the 380 ACP pistol. The 9mm Shield EZ is slightly larger and heavier than the 380 ACP version. The pistol weighs about 2 more ounces. Force needed to rack the slide is slightly higher — but only about a pound heavier. Considering the company kept 9mm recoil controllable, this is an accomplishment. The 9mm EZ is well contoured and comfortable to grasp and fire. We liked the small wings at the end of the slide toward the rear sight that allow easy racking of the slide. They are a nice addition, and some will like to use these outcrops better than they like the slide serrations. At the least, they are a nice little anti-slip device. The 9mm pistol is only slightly larger than the 380 ACP, and we feel there is really no concealment penalty. Further, the much more powerful 9mm handgun will conceal easily in a proper holster.

The trigger press on this pistol was very smooth and broke at a clean 5.5 pounds. We fired a good number of Federal American Eagle 9mm during the combat course, making certain every rater had a run with this handgun. The other two pistols, we felt, were basically an alternative to the popular 9mm, and we wanted to get the measure of the 9mm Smith & Wesson. Eventually, we fired 200 cartridges. The 9mm pistol develops as much as 400 foot-pounds of energy. The 380 is much weaker, with few loads coming in at more than 200 foot-pounds of energy.

However, there is a penalty in recoil. The 9mm may have a power factor of 140 to 150. The 380 comes in at about 70 to 90 power factor. So, while we felt the 9mm EZ is a light kicker, every shooter may not feel that way. Every rater is experienced, and while the 9mm S&W is well designed, it certainly kicks more than the 380. But we feel the upcharge in power is more than worth the extra training time. We don’t feel that recoil is a problem until the power factor reaches a 200 rating with lightweight 40 S&W rounds, 45 ACPs, and 357 Magnums. The 9mm version certainly handles well. This pistol features a safety, which some of the raters like better than the no-safety version we fired in the 380 Shield.

Our Team Said: Accuracy is actually slightly better than either the 380 ACP or 30 SC versions. Statistically, the difference in accuracy is nominal, but also demonstrable. In the end, we find no flies on this pistol. An earlier team found that the 9mm EZ fired low with every load. Ours was well regulated with the test ammunition. All three pistols are accurate. Both the 380 ACP version and the 30 SC broke just under 2 inches for a five-shot 25-yard group, exceptional accuracy. With one load, however, the 9mm sent five shots into only a 1.5-inch group. In the end, this pistol is Our Pick of the three.

Notes: Average Velocity and Standard Deviation readings were obtained by firing five rounds over a Competition Electronics Pro Chrono. Ambient temperature: 70 degrees. Elevation: 776 feet above sea level. l The accuracy figures are the average of three five-shot groups. We fired the test guns from an MTM K Zone rest at 25 yards. l To calculate IPSC power factor, multiply bullet weight in grains by the velocity in fps, then divide by 1000.