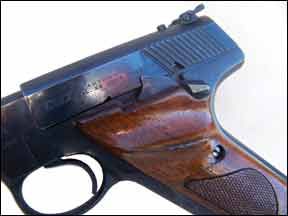 Over the past few months we have been asked to do matchups involving the great guns of the past. Wild Bunch pistols, the Browning Hi-Power, the Mauser Broomhandle and other types of handguns are always interesting. As a rule, you cannot paint the great handguns of the past with a broad brush, as some were designed to be the best possible, others were made cheaply, and

others were made to sell, which always invites compromise. But there was a day when the goose hung high and Gun Valley America ruled the world. The great guns made in Gun Valley by Smith & Wesson, Colt, and High Standard were at the top of the heap, and these handguns of the past always have a following.

One reason we are comparing these handguns is because many are still available. If you are motivated enough, you may find a Colt Woodsman, a Smith & Wesson K22, or an original High Standard 22 LR on the used market. The choice is limited, yes—you must take what you can get or what you are able to find. As an example, you may have to settle for a Colt Targetsman rather than a highly developed Woodsman, and while the 4.5-inch barrel variant is rare, the 6-inch gun probably shoots a little better. The question is, should I rush to the gun show, cash in hand, and purchase a classic, or should I purchase a modern handgun? The answer is primarily in motivation. Do you want a shooter or a collector’s piece? With all due respect, few of us are interested in true collector’s pieces. Unfired or lightly used handguns are very expensive. I think most of us are interested in shooters from 50% to 85% condition. Is there more pride of ownership in a brand-new polymer-frame handgun or a well-used steel-frame classic? Only the buyer may answer that question, but here at Gun Tests we report on accuracy and reliability.

In this installment we are comparing one of the classic Colt 22 LRs, the Colt Targetsman, which we bought for $600, to the Ruger 22/45. This was deemed appropriate because the Targetsman is a middle-of-the-road 22. The Colt Woodsman, a standard model from which the Targetsman is derived, featured fixed sights and plain grips. There were also target-grade variants of the Woodsman that featured a heavy barrel and high developed sights. The Targetsman isn’t quite up to target-gun standards but it is certainly a nice shooter, with its low-profile adjustable sights and a thumb-rest grip as well as a standard thin barrel. It is a nice shooter, an in-between gun. There were highly developed Colt 22s and also less-expensive Colt 22-caliber pistols. The Ruger 22/45 is also a relatively inexpensive pistol. There are fixed-sight variants of Ruger pistols and also pistols that are much more expensive. Designed for economy with a polymer frame, the 22/45 is intended to mimic the 1911 45 ACP in both grip angle and control location. Our 22/45 sports broad, easy-to-see adjustable rear sights and a broad front-post sight. There are no separate grips in the polymer frame.

The appeal of either handgun is based largely upon reputation. The Colt Woodsman series had a reputation as the least likely of all 22 automatics to jam, according to one source. Our Targetsman rimfire example was manufactured in the 1960s. The blue finish is very nice, very original, and the grips are also nice considering their age.

The first thing you notice about this handgun is the nice bright-blue finish. It really is more blue than black, unlike modern handgun finishes. The fit and finish are simply impeccable. The grips are worn a bit, but nothing that really detracts from the pistol. This Colt has a different feel than most modern handguns. The barrel is light, almost whippy, in comparison to modern handguns. We have come to prefer heavy barrels on our 22s. Even the Ruger Standard Model pistol has a heavier barrel than this handgun. It is what we used to call a pencil barrel. There were few, if any, bull-barrel options on 22s, even the heavier-barrel 22s simply used a weight or heavy underlug.

The Targetsman features adjustable sights that were deemed an improvement over the fixed sights of the Woodsman. These sights are OK, but the rear sight is quite small by modern standards. We would not like to attempt to find small parts for replacement, and the rear sight does not seem as robust as modern sights—but, then, it has survived more than 40 years, with what we were told was heavy use for much of its first decade. The trigger demonstrates some take up, but breaks at a crisp 4 pounds, light enough and consistent. The pistol feels good in the hand, but the balance does take some getting used to, with more weight in the butt than modern guns.

We had only one magazine, and be careful when ordering a spare magazine. There are several generations and you could easily end up with the wrong one. The first Woodsman featured a heel clip release magazine, then they went to a Browning-style magazine release, then this one, the third-generation type, reverted to the original. There are also several grip styles to contend with. We have used Triple K magazines with good results, but otherwise the magazines are not to found on the dealer’s shelf. We would suggest looking at www.AuctionArms.com and checking for additional mags, or post a request for additional magazines.

The safety is a handy thumb-operated type, and the slide lock is well placed for rapid manipulation. In preparation for firing, we carefully wiped the pistol with oil and lightly lubricated the bolt, then settled down to shoot the pistol off of the bench at 15 yards. We had on hand a variety of high-speed 22 Long Rifle loads, including Winchester Super X and Federal High Velocity Champion loads.

We used these Winchester and Federal loads as well as the Winchester Wildcat in firing some three hundred rounds without a single failure to feed, chamber, fire or eject. Three hundred rounds is a good bit of ammunition and about the place where the relatively dirty 22 starts to choke up. The Colt sailed through. We used the Winchester Super X and Federal Champion loads for accuracy testing. Accuracy was appealing, with some groups as small as 1.25 inch at 15 yards.

Our Team Said: Overall, the Targetsman was a very pleasant handgun with much to recommend it. While muzzle light, the pistol is very accurate and certainly proved to be reliable. We do not know much about the spare-parts situation, but spare magazines and grips are difficult, but not impossible, to find.

We fired the Ruger after the Colt, and, frankly, some of us thought we would get this over with—the Ruger could not possibly top the pleasant shooting experience of the Colt. We were wrong. The firing experience, while different, gave us good results. One of our raters remarked that we should be able to fire 300 rounds simply to groove in. A fine shot, he doesn’t feel that accuracy testing is appropriate unless you are grooved into the piece. There is something to his opinion. Sometimes a steel slide over a polymer frame results in a barrel-heavy handgun that tends to fire low. Not so with this handgun.

The Ruger 22-45 weighs nearly the same as the Colt, the barrel is a half-inch shorter, and balance is actually good. This is the first thing we looked at after firing the well-balanced Colt, and we were surprised to find the two dissimilar pistols so similar in balance. Sometimes you do not appreciate an inexpensive workhorse such as the Ruger until you fire it against a more expensive (and semi-legendary) handgun. Hand-fit was another matter. The Colt was wonderfully designed in the butt. The Ruger controls are well placed, with the buttons comprising the safety and slide lock well placed, but we liked the Colt better. The Colt, in fact, seems the better training pistol for the 1911, our testers said.

The bolt of the Ruger is contained in the receiver, while the Colt features an exposed slide. The sights of the Ruger are considerably improved over the Colt, and the sight picture is superior. The Ruger is moderately priced and comes with two magazines. The owner who allowed us to use the Ruger handgun had cleaned it, but not thoroughly as we spotted a few pieces of unburned powder on the bolt and in the receiver after we were at the range. Too late to clean it then, we let that go and lubricated the bolt and began our shooting test, using the same loads used with the Colt. It was much the same story.

We shot 300 rounds without a malfunction and enjoyed a very pleasant shooting session. But the Ruger outshot the Colt. Not by a significant margin, but by a measurable margin and with every load tested. Then one of our raters, with a proven sadistic bent toward testing handguns, offered a box of Fiocchi standard-velocity target loads. We all know that 22-caliber self loaders are not supposed to function reliably with anything but high-velocity loads. Still, the Ruger sailed through half a box of standard-pressure loads, although it was, No. 1, dirty and No. 2, in completely original condition with the original springs.

The Colt failed to function at all with the standard pressure loads, only moving the bolt to the rear. This is not a fair thing to compare, but worth observing. The Ruger is more versatile.

Our Team Said: How do you reach a decision with two very good guns? It is really simple. If you cannot tolerate a polymer-frame pistol, the Colt is a good choice. But if you simply wish to own a reasonably priced handgun with many good features, the 22/45 works well, too. One other point: this is the low-end Ruger. The better Ruger pistols will shoot even better. The Targetsman would be able to hold its own with but few of these pistols. The Colt is a very good gun, but let’s face it, we have advanced a bit in the 30 years since the Targetsman pistols went out of print. If you ever need spare parts or even something as simple as a spare magazine, the pistol will be more trouble to maintain.

For those reasons, our team of experienced shooters said the Ruger is the far and away the better choice for affordable plinking and light target shooting.