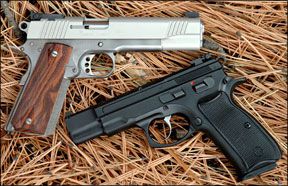 The concept of shooting 22 LR ammo in centerfire handguns goes back a long way. The Germans had a system for the Luger when centerfire ammunition was mighty scarce between the two World Wars. These conversion units consisting of an insert barrel, a different toggle mechanism, and suitable magazines. Insert barrels were also used on the Walther PP at that time to fire a low-power 4mm round, presumably for indoor gallery use. These 4mms were one-shot deals, the round not having enough power to run the slide, so you had to work it by hand. Also pre-WWII or shortly thereafter were some conversions for the 1911 45 autos involving a lightened slide, which predates the Colt Ace conversion with floating chamber. Then the Ace system came along, and it let 22 LR rounds give the same kick to your 1911 as when firing 45 ACP rounds, thanks to a flying breech that essentially amplified the kick of the rimfire rounds to cycle the normal slide. Even more recently a few 22 LR units were made in Germany for the P-38, apparently for police/border-guard units. Like todays units, these consisted of slide, barrel, and magazines suitable for rimfires. Of course there have been many other 22 conversions along the way and were sure we forgot some, but our focus here is on only a couple modern ones.

Todays centerfire shooter who wants to save ammo money, or just plain wants to shoot a lot more for the same money, can buy 22 conversions that replace the slide with a more appropriate one, generally of lighter weight. In the case of our two test units for this report, the slides were fitted with excellent adjustable sights and excellent barrels. Changing centerfire to rimfire involved only taking off the original slide and replacing it with the 22 conversion unit, securing it in place with the normal cross pin, plugging in a 22-caliber magazine, and bang, youre done. In a non-exhaustive search we found modern conversions for 1911s by at least four U.S. companies, Kimber, Ciener, Wilson, and Marvel. There are several 22 conversions for the 1911 made in other countries, notably Italy, but we have not seen those here yet. CZ makes one for its Model 75, called the Kadet Adapter, and Ciener also offers one for the Hi-Power. Note that 22 conversions are available for only a tiny fraction of todays vast assortment of auto pistols.

For this test we secured conversions for the CZ 75, called the Kadet Adapter ($412), and the Kimber Rimfire Target conversion for 1911s ($330). We have been promised conversions for the Hi-Power by J.A. Ciener, and a new unit from Wilson Combat, but as of our deadline they hadnt arrived. We plan to follow this test report with another, at a later date, featuring the new Wilson, Cieners Hi-Power, and one of the Marvel units. However, all makers report very high sales and relative scarcity of these units, so we wont make any promises as to how soon youll see that next test.

We tested with three types of rimfire ammunition that included light target loads, normal 22 ammo, and one of the hotter types with an odd-shaped bullet. They were Eleys XTRA pistol ammo, Federal Classic RN, and Remington Yellow Jacket with truncated-cone, hollowpoint bullets. Heres what these two units gave us.

We recently tested the CZ 75 9mm Model B pistol and liked it a lot, especially its provision for cocked-and-locked carry of a DA/SA auto. For this report we acquired the CZ 75 Kadet 22 LR conversion for the gun. This well-made unit fit easily onto the CZ, and gave the same overall look and balance. An important point about the CZ conversion is that it uses a fairly heavy slide/barrel assembly to retain the original weight and balance of the piece in 9mm configuration, and then uses a separate sliding breech, much like that on the S&W Model 41, to cycle the rounds in and out and recock the hammer. The magazine capacity was only 10 rounds for the 22 version, compared with 16 for the 9mm.

Another, very pleasant, difference was the sight setup fitted to the Kadet. The rear was fully adjustable, the front was slanted like the full-size version, the sight picture was outstanding, and both front and rear had tritium inserts to permit low-light practice.

Two magazines came with the Kadet in a full-gun-size plastic case. We found the CZ magazines a touch harder to load than those for the Kimber, but they were not at all difficult to load, except maybe the tenth round. Everything about this conversion kit was very well made and nicely finished in a matte black that matched the gun exactly. We noted the 22 barrel, breech slide, and stationary slide were all serial numbered, and the barrel chamber carried a proof mark.

We installed the Kadet onto our Model 75B, which took only a few minutes. We neglected to lubricate the unit, however, and the first five shots of normal Federal ammunition failed to feed. All the empties got out, but the flying slide didnt get far enough rearward to pick up the next round. These brand-new parts needed oil. We fixed that problem and the Kadet conversion then handled even the light-recoiling Eley match ammunition with ease. There were no failures to feed, fire, or eject. A nice touch was that the gun would stay open after the last shot, a feature missing from the Kimber, at least with our non-Kimber test frames. We were very pleased with the function of this setup.

Even more to our liking was the conversion units outstanding accuracy. The sample target that came with the unit showed the fine potential of the Kadet, and we were able to match the factory results with several of our groups. The sights as received were precisely aligned with the center of our 15-yard target. As noted in the original test of the 9mm, the trigger of the CZ needed work. A really fine trigger job would benefit this gun immensely in both calibers.

Our Team Said: The price was fair for the quality, and if you shoot a lot, such a conversion will pay for itself in money saved over the cost of centerfire ammunition, especially at todays prices. In fact thats true for all 22 conversion units, one of the reasons theyre so popular today. Wed highly recommend the Kadet to owners of the CZ handguns that accept it. The Kadet Adapter will also fit the single-action CZ Model SA, and all full-size CZ pistols from the 75/85 series. Check the website (cz-usa.com) for details.

Kimbers conversion package included a very light slide fitted with outstanding, matte-blued, fully adjustable, no-nonsense target sights. These had sharp forward edges, but in fairness one doesnt generally practice stovepipe clearance drills with rimfire cartridges. The front sight was slanted slightly rearward, just the setup one wants on a target pistol, and for that purpose we could hardly fault Kimber. One of the more serious uses for this conversion would be for NRA competition, which would give the exact same trigger pull for all three stages of a three-gun match, which would include rimfire, centerfire, and 45 ACP.

Also available in all-black, the Kimbers “silver” slide had a durable matte-white finish that was put on with obvious care and pride. The machining inside and out were flawless. The various parts that made up the unit were all carefully matched and well finished in a dull, off-white, glare-free color. The slide had cleanly cut front serrations for press checking as well as the normal ones at the back. The fit of all the various parts was impeccable. The 1:16-twist barrel had a recessed crown for greater protection.

For our test pistol we chose our fine Fisher Custom Norinco, which gave us a perfect trigger pull. We were concerned that the Kimber slide might not fit easily into the tightened rails of the Fisher gun, but it was a fine match. The instructions that came with the Kimber told us to be sure to oil the conversion unit and the test frame in very specific places, and we did just that. In light of the oil warnings, we expected at least some break-in period, but we didnt have to wait long. Our first attempts were with the light Eley target ammo, and it took all of four shots for the gun to cycle on its own with that extremely light-recoiling ammunition. We thought that was excellent. As with the CZ, once the gun got going, there were exactly no problems with it whatsoever. Accuracy was on a par with what we had received with the CZ Kadet, best groups running just over an inch for five shots at 15 yards. Kimber guarantees 1.5-inch accuracy at 25 yards with this unit. In our limited testing we had several groups that would indeed achieve that. With extended shooting and in trying the conversion on other 45 frames, we found that oiling the new unit was critical to perfect functioning, just like the factory told us in the instructions that came with it. For best results over the long haul, wed keep it on only one 45 frame.

Out of curiosity we tried the conversion unit on one of our crews favorite 45s, a light-weight Colt CCO, and the Kimber unit fit and functioned quite well. The magazine protruded out the bottom of the frame and the slide was full length instead of the CCOs Commander-length slide, but that didnt matter. It gave the owner of the CCO the ability to fire rimfires in his favorite handgun, which he liked a lot. We then tried the unit on another customized, tightly fitted Colt with Robars slick NP3 finish, and although the slide went forward slowly at first, it fed and fired perfectly.

The light slide of the Kimber gave the test guns a different feel, but we found it to be pleasant. The overall feel was still distinctly 1911, though the guns were all a lot lighter. That might or might not be an advantage for serious NRA target work. Be advised these conversion units are not considered to be firearms, so you can buy them directly from your favorite source.

Our Team Said: We were mighty pleased with the Kimber Target Conversion. This was another winner, one that we thought any owner of a single-stack 1911 could put to very good use. We suspect all makers of 22 conversions will be very busy in the foreseeable future. One new 1911 shooter who stopped by our test range was amazed that such things as these conversions existed, and was pleasantly surprised at the cost of them. He told us he will be buying one for his 45. But were not letting go of this one!