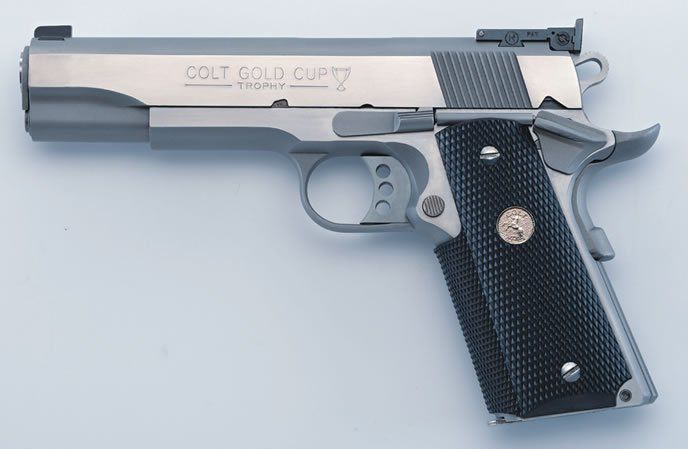 Although many 1911 shooters are concerned with personal defense, a market clearly exists for target-sighted 1911 handguns. Makers who offer a 1911 of any type often provide an upgraded target model for those wishing to use the pistol in competition. Many of these are a far cry from the old warhorse that fought in two World Wars and many skirmishes elsewhere. In this shoot-out, we have included a classic target-grade 1911, the Colt Gold Cup Trophy against a Metro Arms long-slide 1911 offered as a factory product in the extended version that many shooters appreciate. During the course of the test we learned something about accuracy and came away with respect for each handgun. But one handgun was clearly better and more practical for most shooters.

BudsGunShop.com had this pistol listed for $1032, which we think is a great price on a very good gun. The Gold Cup is Colt’s current rendition of a target-grade 1911. The Trophy features a beavertail safety and skeletonized hammer, compared to the more traditional National Match. This handgun was worth a hard look because it differs considerably from Colt Gold Cup pistols we have previously tested. The Gold Cup series has seen a lot of changes, and we believe that they are good ones for reliability and longevity.

At one time the Gold Cup was manufactured with a lightened slide that reduced the nominal weight of the pistol from 39 to 37 ounces. This 1960s-era expedient was intended to help it function with light target loads, but match shooters felt that the balance of the handgun was adversely affected. The balance was restored with the Series 70 pistols. The pistol was also produced with a flat-top slide, but the current Colt tested here featured a round-top slide. The rear sight was once held with only a roll pin. This led to the rear sight sometimes taking flight. While the sight pin could be replaced with a sturdy solid pin rather than the roll pin, the present dovetailed-in sight was rated superior. In the opinion of our testers, the sights offer an excellent all-round sight picture.

The pistol exhibited good fit, and the barrel bushing was tight enough to require that the Perry bushing tool be used to disassemble this Colt. The Colt featured a Series 80 firing-pin block, which may complicate getting a topnotch trigger action. As it was, our Colt’s trigger broke at a clean and crisp 5.25 pounds.

As noted, this Gold Cup featured a round-top slide, in common with the Government Model. The ejection port was properly scalloped, and we noticed the pistol used the modern XSE frame with a slight cut out just under the trigger guard. This lowers the already low bore axis and seems to aid in off-hand fire. The beavertail safety was adequate for the task, but we like the MAC better.

The Colt was a specialty model from a major distributor, who seemed to have ordered a number of synthetic white grips with a golden Colt pony. These grips were monstrous! The lines were not pleasing, and the grips were too thick for any of our raters to use well. The standard Colt is supplied with a set of synthetic checkered grips, and these are by far the superior option. Because changing grips is something any bullseye shooter might do, we fitted the test with a set of Pachmayr grips and stowed the gaudy white grips.

Then we lubricated the pistol and took it to the range for a firing test. There were no failures to feed, chamber, fire, or eject with the HPR 230-grain FMJs. The pistol felt good in the hand, and the sights offered a good look at the target.

Later, the Colt proved controllable and combat accurate in rapid fire. With the standard 16-pound recoil spring, the pistol cycled the 185-grain ASYM target load the other pistol would not. We believe that this was due to the typical lighter hammer spring. If you change recoil springs, be cautious and study the equation to get the right balance for reliable ignition.

Off the bench, the Colt gave excellent results. This was the type of pistol that will make a shooter test various loads just looking for the sweet spot, and it might prompt such a shooter to also conduct a handloading program. The ASYM 185-grain Match load was the most accurate in the Gold Cup, giving a 1.3-inch best effort. Results were very consistent with this pistol. There was little deviation between the best and least accurate groups.

Our Team Said: The Colt came out of the box shooting, with no break-in period needed like with the MAC. It offered good practical accuracy offhand and excellent all-round target accuracy. Its standard size makes it a better all-round gun as well, in case it needs to serve multiple roles.

The Metro Arms Company (MAC) Bullseye gun is a target-grade long-slide 1911 handgun. Long-slide 1911 handguns began as expensive custom propositions, and most factory long-slide renditions are likewise costly. The dust cover wasn’t elongated — all of the extra length was in the slide. We thought the MAC pistol was affordable at a MSRP of $1279, and we have seen advertised prices considerably lower. The slide was marked “MAC Bullseye” and “1911,” with a stylized pistol in the M, on the left flat. The MAC logo was stamped on either side of the slide at the rear.

With 1.3 extra inches out front and an additional 9 ounces of weight, the MAC pistol was easily the most comfortable handgun to fire of the two tested. Initial examination of the pistol revealed excellent fit, finish, and attention to detail. There were no tool marks, polishing marks, or blemishes of any type on the hard-chrome finish. The slide featured a combination of rear and forward cocking serrations, the latter being handy for verifying a loaded chamber prior to shooting a timed course of fire. There were four cocking serrations forward and five to the rear on each side of the slide.

The rear sight was a fully adjustable Kensight, a reputable choice. The front sight was a dovetailed post that held a fiber-optic tube. The ejection port was a modern type with plenty of clearance. The extractor was tool steel finished in blue. The top of the slide was finished in the flat-top style once used on the Colt Gold Cup, and begun, we believe, by the Randall Company. The pistol looks right with the flat-top slide.

The barrel was a bushingless lock-up type and was very tight. One of the raters noted that from his frame of reference, the MAC locks up as tightly as his personal Springfield TRP, a high standard of fit. It took some effort to unlock the slide. Its ramped barrel supplies cartridge case support. The hammer was skeletonized and nicely serrated. While adjustable sights often interfere with manually cocking a hammer, this is the best answer to the situation. The slide-lock safety was ambidextrous good fit and a tight indent. The slide lock was a standard size, which all of our raters prefer. The upswept beavertail safety was well designed with a pronounced memory groove. The grip safety releases its hold on the trigger about halfway into compression of the grip safety. The fit of the grip safety and the design are ideal for all-round use, we thought. The grips were a semi webbed pattern we found attractive. They offered good adhesion when firing. The mainspring housing was nicely checkered. The front strap offered custom-grade checkering clearly defined near the top by a nicely cut border.

There are two things that many shooters will like about the trigger action. The MAC Bullseye gun’s trigger broke at 4 pounds even. There was little take-up and no creep. This was as good a factory trigger action as we can remember. The trigger offered excellent serrations on the face for control. The trigger face, front strap, and mainspring housing were all nicely finished to give good adhesion, but none were abrasive. There was no firing-pin lock or drop safety, like found on the Series 80. The pistol featured a magazine funnel, another plus for competition use.

The raters who had not fired a long-slide 1911 were surprised by the natural point and balance, but they noted the pistol was much slower when drawn from a Blackhawk belt slide. But this is simply the nature of the beast. Once the pistol was up and in two hands, it tracked well between multiple targets. In long firing strings, the front sight simply hung on the target, making follow-up shots easier. While personal defense or perhaps even action shooting isn’t the name of the game with this handgun, the pistol nonetheless posted excellent groups when it was fired as rapidly as we could reacquire the sight picture.

During the initial break-in period with full-power 230-grain ball, our team experienced several failures of the pistol to go into battery, and even a few in which the slide did not fully close on loading the first round. We cleaned what appeared to be preservative grease from the slide and rails and lubricated the pistol with standard gun oil. The pistol eventually functioned reliably, but only after we fired 100 rounds for the break in. This included 50 rounds of Federal American Eagle 230-grain FMJs and a like number of HPR 230-grain JHPs. There were no feed problems with the JHP loads, but the pistol was slow to cycle, with numerous failures to lock into battery during the break-in period.

We fired the pistol with three loads that have previously demonstrated good accuracy. During the firing test off a solid bench, we experienced a short cycle with the 185-grain target load. The pistol didn’t seem to be finicky about feeding different bullet styles, but it certainly needed a considerable break in. Also, some experimentation with recoil-spring weights was in order. We changed the recoil spring to an 11-pound Wilson Combat spring, which allowed the gun to function with the 185-grain target load. Considering that this handgun was made for target shooting and not personal defense, a potential buyer should have no qualms about working bugs out of the pistol, in our opinion.

On paper, the MAC demonstrated excellent accuracy and consistency, with little deviation between groups or even between different types of quality ammunition. The best group came in at about an inch at 25 yards with the ASYM 185-grain load. The best average was recorded with the ASYM load at 1.4 inches. After the 100-round break in, the pistol never failed to feed, function, chamber, fire, or eject with full-power 230-grain loads. We should note that many factory 1911 handguns would not have functioned with the 185-grain target load either. The pistol produced the highest energy of the three handguns tested, turning in an impressive 400 foot-pounds at the muzzle with the 230-grain American Eagle load. While the increase in velocity over the 5-inch-barrel guns was modest, it was appreciated.

Our Team Said: We cannot think of anything we would add to the handgun, save for, perhaps, tuning the recoil springs. Toward that end, we bought a $29.95 Wilson Combat Spring Caddy that includes a carrier, springs, bushing wrench, and shock buffs to achieve reliable function with whatever load we preferred. By tailoring the spring weight to the load, we achieved good results with the 185-grain 750-fps load and also a handload using the Oregon Trail 200-grain SWC at 790 fps. The Bullseye isn’t the most practical handgun, but there isn’t anything else quite like it in the price range.