When it comes to producing a Gun Tests evaluation, the process can be complicated by differences in operation. For example, a tight protocol, such as 9mm polymer pistols with 4-inch barrels and identical capacity, can challenge our test staff to master a different trigger for each gun. That won’t be the case here, because the operational differences in these two guns are subtle, despite their vastly different cosmetics.

Our 45 ACP test guns were the Kimber Desert Warrior, $1441, and the Double Star DSC Combat Pistol, $1350. Despite having so much in common with the Kimber, the appearance of the DSC Combat Pistol could not have been further from that of the Desert Warrior. If you love the way your AR-15 “black gun” looks, the Double Star Combat Pistol provides a matching sidearm. Only the stainless-steel barrel hood and aluminum trigger broke up the understated color scheme. In contrast, the choice of color and the unusual grips found on the Desert Warrior set the gun apart from other 1911s. Officially, the color of the frame and slide were Desert Tan, but it could also be called khaki. The appearance of a lanyard loop at the bottom of the mainspring housing was also a distinctive touch.

To get started with the test, we first made sure each gun was lubricated. These are steel guns with a lot of metal-to-metal contact. We lubricated the slide and frame rails, the disconnector, the swinging link, each side of the hammer and along the outer surface of the barrel. The barrel lugs were lubricated by filling the matching wells beneath the slide with BreakFree CLP oil.

We began our tests by cleaning out the ammo closet, shooting each gun with a variety of rounds, including 200-grain lead semiwadcutters from Black Hills Ammunition. We then settled in at our bench along the 25-yard line. Here we fired 10 round groups from a sandbag rest. Our test ammunition was Wolf 230-grain Copper FMJ with steel cases and non-corrosive primers, 200-grain JHP/XTP +P Hornady rounds, and Federal 230-grain Hydra-Shok JHP ammunition.

Our big question: Since the guns were essentially the same mechanically, would the statistical results be a dead heat? Or would our guns exhibit distinctly different personalities? Let’s find out.

The grip panels were wide in profile and composed of a ceramic. This was an unusual choice of material. The dimples were polished, but the raised areas had a mild abrasive nature. The grip panels were held in place by black Allen screws. The use of black for contrast was also extended to other components, such as the mainspring housing, grip safety, the ambidextrous thumb safety paddles, the relieved hammer, slide stop, magazine release, aluminum trigger, the barrel bushing, and the spring plug.

The KimPro finish looked like it would be slippery, but it was not. We applied some oil to the outside of the frame and slide to see if it would become impossibly slick, but we were surprised to find the oil had little effect on our ability to grip the slide. Dirt just seemed to fall off, and we didn’t have to clean the gun up before photographs were taken.

Meprolight Night sights were dovetail-mounted front and rear, and the accessory rail offered three slots. The front strap of the frame lacked checkering. In handling the Desert Warrior, some of our staff felt the rear edge of left-side safety interfered with the web of the strong hand. But shooters with larger hands were able to shoot the Desert Warrior without discomfort. Changing to a slimmer set of grip panels was a quick remedy for those who were uncomfortable shooting with the stock grips. In an age where entirely new models are produced merely to accommodate interchangeable grip panels, no one seems to mention that the 1911 has offered this feature from the beginning.

Both guns operated with a short guide rod. To remove the top end of the Kimber, the shooter begins with compressing the recoil spring plug and turning the bushing to about 8 o’clock to release the recoil spring. This also takes the pressure off the slide. Moving the slide rearward, the slide-stop pin can then be easily removed from the left side of the frame.

The Kimber Desert Warrior shipped with one 7-round magazine (blued-steel body with basepad), and two 8-round polished stainless-steel magazines with oversized basepads. The 8-round magazines also featured numbered viewing holes. We should note that despite being listed under Custom II pistols on the kimberamerica.com website, the Warrior series are not Type II pistols. (Actually, the Desert Warrior has yet to be listed at all). Type II designation indicates that compression of the grip safety is required to release the firing-pin safety. But sometimes a sloppy grip can fail to compress the grip safety and keep the gun from firing. Many tacticians prefer not having the Type II feature, so that they do not have to worry about getting a perfect grip in order to fire.

We used a Chatillon model IN25 trigger scale and discovered that the Kimber’s trigger was set at a remarkably consistent 5 pounds of resistance. The trigger had a smooth takeup and a cushioned grit-free break. Not glass-break crisp, but clean and predictable nonetheless. From the bench, our best-performing ammunition was the Wolf steel-case 230-grain full-metal-copper-jacketed rounds. But the data showed that the average group radius was only fractionally better than accuracy achieved when firing the Federal Hydra-Shok Personal Defense rounds. Both of these rounds were capable of delivering groups that would measure about 1.10 inches across. The Hornady ammunition was also impressive when loaded into the Desert Warrior, but average groups tended to expand by approximately 0.3 inch on average. We liked the fact that we could get about the same accuracy with the inexpensive Wolf ammunition and the Hydra-Shok rounds. Reliability throughout our tests was 100%, and we never had a problem in any one phase of operation of the Kimber Desert Warrior.

Our Team Said: This gun has an unusual look, but its finish was functional. The use of ceramic grips was another surprisingly useful component. The night sights were first rate, and the gun flat ran on any ammunition we put in it. The extra magazines were first rate as well. We’d probably trade a lanyard for some frontstrap checkering, but you would be surprised how many LE and ex-military ask for this feature. Deleting the Type II feature was a good idea in our view. The Desert Warrior was capable of delivering topnotch accuracy with some of the least expensive ammunition we could find as well as some of the most aggressive defensive rounds being sold today.

The black grips on this gun were a perfect match for the frame, and, overall, we would rate ergonomics as close to perfect for all hands as we can imagine. Both pistols offered a raised contact area at the lower edge of the grip safety, but the pad found on the Double Star’s was bigger by about 40%. However, the thumb safety was left side only. Frame relief leading to the trigger was noticeably larger on the DSC. Slightly more aggressive cuts were also found at the ejection port. Both pistols offered a three-slot accessory rail, but the first slot on the Kimber Desert Warrior’s was positioned about 0.4 inches forward when compared to the Double Star. This would be a plus or a minus depending on the length of the laser/light unit one attached relative to the shooter’s individual hand position.

The sight picture was provided by Novak sights dovetailed in place front and rear. By now many manufacturers copy this snag-free profile, (including Kimber), but these sights were the genuine article. Sight acquisition was enhanced by three non-luminous white dots. Instead of a plastic hard case that usually spends all its time in closet, the Double Star Combat Pistol arrived in a 5.11-brand zippered black ballistic nylon softcase. The case was well padded and embroidered with the Double Star logo. Inside was a separate zippered compartment and magazine loops.

The magazine well on both test guns was beveled but in a different manner. The Double Star magazine well showed an angular cut that was roughly equal along the rear of the well and along the sides. The Kimber offered almost no slant to the rear edge of the magazine well but the sides were gracefully cut and polished. Two other small differences in the machining of each pistol was the treatment of the magazine release button and the grip surface of the slide stop. The Double Star featured lined cuts on each part (horizontal on the slide stop and vertical on the magazine release). These same parts were checkered on the Kimber pistol. If we had to choose, we would greatly prefer the checkering on the front strap of the Double Star over the checkering on the mag release or slide stop.

The Double Star Combat pistol arrived with only one magazine. This was an eight-round Novak component with viewing holes and black finish to match the pistol. During our initial range session we could not get the Double Star to freely release any of our magazines including the supplied Novak or either of the three that arrived with the Kimber. In subsequent range sessions we found that drop-free release was hit or miss. We did observe that the Novak magazine tended to drag more than the ones supplied with the Kimber. Our only actual malfunction of the test came when firing the Hornady ammunition wherein the Double Star failed to fully chamber. But even in rapid fire this problem never arose again. So, it is difficult to tell if this was a result of the operator letting the pistol rest interfere with movement of the slide, a damaged or out of spec round, or simply a matter of the pistol expressing less tolerance for the profile of this particular bullet.

The trigger on our DSC Combat Pistol broke at about 5.25 pounds. This was a soft break that at times prevented us from delivering sharp rapid fire strings. In terms of accuracy, the Double Star proved most accurate firing the Federal Hydra-Shok ammunition. It is not unusual to find serious defense guns that are tuned for this particular round of ammunition. One member of our staff recalls training with an FBI team that brought with them literally barrels of Federal Hydra-Shok. Our Double Star seemed only moderately happy firing the Wolf and Hornady rounds but perked up smartly when loaded with the 230-grain Hydra-Shop hollowpoints. Our chronograph showed us that the Federal Hydra-Shok rounds were traveling about 50 fps slower on average when fired from the Double Star pistol compared to the Desert Warrior. But the Double Star was more accurate with the Hydra-Shoks, besting the Desert Warrior’s average group radius with perfect point of aim impact.

Our Team Said: The ergonomics on this 1911 are as near perfect as any we have encountered. We liked the sights, too. We think that any complaint we had regarding magazine release or a lack of crispness in the trigger could be easily addressed. Double Star Corporation is a small company, and we found them to be a customer-friendly service-oriented shop. In terms of configuration and construction, the most important aspects of a fighting pistol are in place. 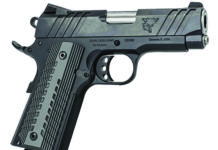 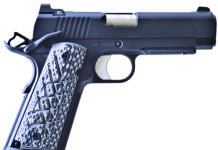 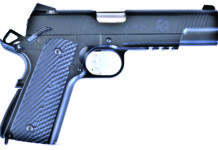