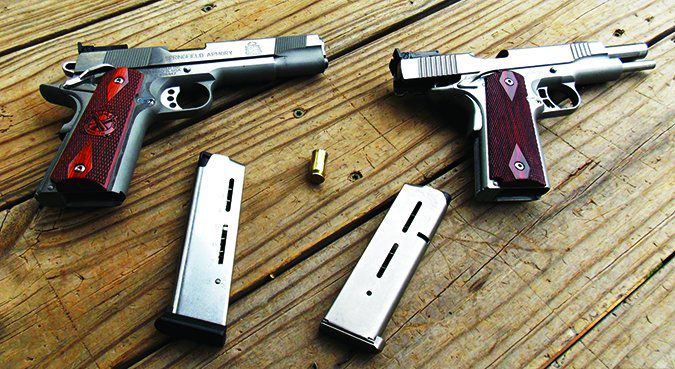 In this installment, we pit two practical target guns against each other. By practical target guns we mean accurate and useful 1911 handguns suitable for personal defense, hunting, and some forms of competition. They are not so specialized that they are not holster guns or unreliable for general use. Some target guns simply are not as robust as these handguns. Fragile sights that overhang the slide too far, as an example, are counterintuitive in an all-round packing gun. If an adjustable sight loses its zero in competition, you will lose the match. Losing zero in a personal-defense situation carries a stiffer penalty for failure. Getting down to the nitty-gritty, fiber-optic front sights are not always desirable in a hard-use handgun because they tend to be fragile, even if they deliver superior targeting performance.

On the other hand, a service pistol or a hunting pistol with adjustable sights is desirable given the wide range of bullet weights and velocity available with the 45 ACP cartridge. Gun Tests readers already know that the 1911 Government Model platform is a versatile, go-anywhere do-anything handgun; but the question is, can target performance translate to defensive reliability and handling?

When the National Matches got into full force after World War One, improvements were undertaken on the 1911 handgun. Barrels were welded up and carefully fitted, and high-profile sights were fabricated. These improvements led to the Colt National Match pistol’s introduction in 1933. The National Match featured a hand-honed action and two-way adjustable sights. Law officers and outdoorsmen also adopted this relatively expensive handgun. Changes and modification led to the Colt Gold Cup. The sights were fragile in many renditions — not the case in the newest models — so the shooter wishing to own a service-grade handgun with target sights had to take the custom route. Expedients, such as fitting Smith & Wesson revolver sights to the 1911 slide, were not always successful, but the Bo-Mar sight was an excellent addition to any 1911.

High-visibility adjustable sights are a good thing to have, provided they are reliable in keeping zero, are not fragile, and aren’t likely to be damaged. Today, we have the best adjustable-sight 1911 pistols yet from the factory, and our two tests guns put them to excellent use. Here’s how they performed.

The Gold Match II offered an excellent trigger action, truly crisp and controllable, excellent accuracy, and sights that offered good adjustment. It was more accurate than the Springfield. The Kimber was reliable, and its final fit and polish were flawless. Still, we felt that the Springfield offered a couple of superior features for much less money.

This price is also from Bud’s Gun Shop. Though we test each handgun on its own merits, at this point we were coming off the Springfield’s run with excellent performance and looking at a handgun that cost $474 more dollars. There had to be superior performance to justify this price increase. The Kimber and the Springfield had been fired in tandem, with each rater taking a turn, during the combat firing phase. The Kimber suffered the same magazine related problems. The Kimber also exhibited the ability to sight the pistol in for any handload on hand. The Kimber is a handsome handgun. The stainless finish is brighter than the Springfield, with better polish. The design of the trigger and hammer differs, but the raters had no clear preference. The mainspring housing of the Kimber is checkered in a different pattern. The cocking serrations are also cut differently, each type has utility.

Each pistol features a set of grips that are both attractive and serviceable. The Kimber features a firing-pin block that is disengaged by the grip safety. The grip safety of the Kimber works fine, but again we like the Springfield’s memory bump design. The Kimber is supplied with two magazines and no accessories.

At this point, after confirming reliability, the match up was shaping up to be a close call. We liked the Springfield’s slide lock safety and beavertail safety better. The finish of the Kimber is more attractive. The Kimber had one advantage not easily over looked. The Kimber Gold Match features a trigger compression of 4.25 pounds that we noticed was very smooth. The lighter trigger action, coupled with a truly smooth compression, resulted in better performance when firing in combat-style shooting and also in firing at targets at the 100-yard range. The Springfield gave good results with proper trigger control, but the Kimber had an advantage. The single best group of the day off the bench came with the Hornady 200-grain XTP handload, a 1.25-inch group at 25 yards. Trigger compression played a positive role in this performance, we are certain.

Our Team Said: Each handgun gave good performance. There were features that were different, such as the forward cocking serrations, that did the business just as well on one pistol as the other. The significant advantage of the Kimber was its trigger compression. However, for a lot less than $474 dollars, a reputable gunsmith could add a trigger kit to the Springfield and you would still have the superior features and money left over. A Nowlin trigger kit, $145 from Brownells.com (654-012-110WB), is one option.

The Springfield offered excellent reliability, good accuracy, and sights that offer good adjustment. It is accurate, if not quite as accurate as the Kimber. The grips supplied with the handgun are particularly attractive. All told, the Springfield not only earned a solid A rating, it is a Best Buy.

This was a recent price listed at Bud’s Gun Shop. To be clear, Gun Tests does not have a commercial affiliation with Bud’s, but the gun seller often has among the lowest prices we find online, and several Gun Tests readers have spoken favorably about their dealings with Bud’s.

Beyond those elements, the Springfield Loaded Target featured highly developed monolithic adjustable sights. They are similar to the legendary and out-of-production Bo-Mars. These are the same sights we have previously tested with the Springfield 9mm Loaded Target and the Range Officer. While each handgun was tested on individual merits, these sights have earned a good reputation among Gun Tests raters. The range of elevation and windage adjustment is quite large, allowing regulation of point of aim and point of impact with projectiles from 165 to 260 grains at 25 yards. One of our raters is an enthusiastic handloader and enjoyed the task of confirming the utility of these sights while testing a number of his handloads. Compared to the Kimber, the Springfield sights extended very slightly more toward the rear of the frame. The front post of the Kimber is slightly longer.

The barrel ramp exhibited the proper 1⁄32-inch gap between the two halves of the feed ramp to ensure proper feeding. The pistol fed wide-mouth hollowpoints, lead semi-wadcutter loads, and even the button- type 185-grain SWC target loads, so in our view, feed reliability is not an issue.

The pistol exhibited excellent fit and finish. The stainless-steel Loaded Target presented a matte-stainless exterior versus the high-polished-stainless cosmetics of the Kimber, but it showed a serviceable appearance. The grips were excellent. The laser engraving was attractive, and the cocobolo grips matched the stainless frame well. Trigger compression was good, with a clean break at 5.75 pounds. The grip safety properly releases its hold on the trigger about halfway into its travel. We liked the Memory Groove beavertail safety of the Springfield more than the simpler design of the Kimber. The pistol was supplied with two magazines, a plastic range holster, and a plastic dual-magazine carrier. The pistol was inspected for tool marks and fit and finish, and then lubricated. The Springfield magazines were supplemented by Brownells 7- and 8-round magazines and Chip McCormick PowerMags.

For draw-and-fire exercises, we loaded the magazines with Black Hills Ammunition 230-grain full-metal-jacket rounds. The initial combat sets included drawing from a Ted Blocker X 16 holster. The targets were placed at 5, 7, and 10 yards. The Springfield was run at speed, firing double taps, controlled pairs, and hammers. The pistol was fast to get on target and cleared leather as quickly as any other 5-inch 1911s we’ve tested. During firing of 50 rounds of 230-grain FMJ loads, there were three short cycles. However, we experienced the same problem with the Kimber and traced this problem to a Chip McCormick PowerMag. So, each pistol suffered a spate of failures to lock that may have been a break-in malfunction, but more likely were the result of a factory-new magazine with a weak spring. It pays to check your equipment, and this was no exception. There is no starting over to check for break-in malfunctions, but the Springfield did not fail to function during the sighting-in phase otherwise.

We fired 10 to 12 rounds of each handload and the Cor-Bon factory load in both pistols and determined that each could be sighted-in properly for the full range of bullet weights on hand. We were at just over 100 rounds when we had malfunctions that also occurred with the suspect magazine in the Kimber. The pistol was cleaned and lubricated and then fired another 50 rounds on silhouette targets from 15 to 100 yards, and also firing at pine combs and such at the far end of the range on the berm.

The ammunition used in the practical accuracy testing was among the most accurate combinations ever fielded, an old-standard handload using the Hornady 230-grain XTP bullet over Unique powder for 872 fps. Results were good to excellent. This is a fine shooter and a good outdoors handgun. There were no malfunctions of any type.

The barrel was cleaned before the benchrest shooting exercise. A load one of our raters has used to take deer, using the Hornady 200-grain XTP, was included, along with two factory loads, the Black Hills 230-grain JHP along with the HPR 185-grain JHP load. Accuracy was consistent, with the single best group of 1.6 inches with the 200 grain XTP load. The factory loads also provided good performance.

Notes: Average velocity readings were recorded by firing five-shot strings over a Competition Electronics Pro Chrono. The muzzle was 10 feet from the first skyscreen. Ambient temperature:45 degrees. Elevation: 815 feet above sea level. The accuracy figures are the average of three five-shot groups. For accuracy, we fired the test gun from a benchrest at a 25-yard target.