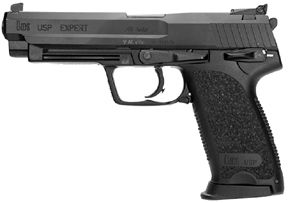 Many shooters would like to marry some elements of the 1911 (.45 ACP chambering, grip safety, cocked-and-locked carry, good single-action trigger) with a lighter-weight polymer frame, and in a growing number of guns, such as the Springfield Armory XD, these 1911/polymer hybrid features are becoming more widely available.

We recently tested two more .45s that blended 1911 and polymer-frame design elements, the Kimber Gold Match Ten II, $1072; and the Heckler & Koch USP Expert 45, $1356. The Kimber is essentially a 1911 Government model with a polymer receiver that feeds .45 ACPs from a double-column magazine. The HK USP Expert 45 also utilizes a wide-body polymer frame and can be carried cocked and locked, ready to shoot single action. But the USP Expert can also be decocked and carried with the hammer down for first shot double action followed by a transition to single-action only fire.

To find out which gun worked better, we collected accuracy data firing single action only at 25 yards using a traditional 230-grain FMJ load from Winchester, a 185-grain JHP round made by Black Hills Ammunition, and the latest defense load from Hornady, a 200-grain TAP FPD hollowpoint, shorthand for Tactical Application Police For Personal Defense.

Here’s how the guns performed:

[PDFCAP(1)]
The USP Expert is a large-frame polymer pistol with a 5.2-inch barrel. Both slide and frame were black, and atop the long top end sat high-visibility sights front and rear. The front sight was tall and undercut to avoid glare. The rear sight was adjustable for windage and elevation, and the rear notch was placed in line with the back of the slide to produce maximum sight radius (about 7.5 inches in length). Both pieces were dovetailed into the slide.

The frame included an accessory rail that was about 2.4 inches in length, molded into the full-length dustcover. The long dustcover did not add much weight; in fact, the entire frame accounted for only about 7 ounces of this gun’s 30 ounces of total weight.

A recoil-buffer assembly consisted of a steel guide rod with two sections. The forward section was longer, but the rear section was stouter. Each section held its own recoil spring in check, making field stripping that much simpler. Slide-to-frame contact occurred mostly on four steel inserts inlaid into the polymer frame.

The barrel on the HK locked up without the benefit of a link, nor was a bushing utilized to secure the barrel at the front. But a small replaceable rubber O-ring was inlaid into the barrel just 0.3 inch from the muzzle to assist lockup. However, the way the top end was removed was still more like a 1911 than other designs. Line up the notch on the left side of the slide with the slide stop and push the stop free from right to left.

The supplied magazines stored 12 rounds of .45 ACP. Base-pad design added about 0.4 inch to the frontstrap. The shooter could activate the magazine release using ambidextrous levers located where the trigger guard connected with the grip. We found we could operate the release with the thumb, by shifting the gun in our strong hand much in the same way we would a 1911. The Expert employed a hammer rather than a spring-loaded striker like that found on most pistols.

The trigger came with an adjustment for overtravel, but was hinged instead of sliding like today’s 1911s. Inside the trigger guard was a raised surface below the tip of the trigger, which we think can only interfere with a smooth trigger press by dragging on the index finger.

The Expert can be fired first shot double action or single action. The double-action trigger offered 11 pounds of resistance, but to us, the pull seemed heavier still. In single-action mode, the release required only 4 pounds, but the amount of resistance seemed even less. Thus, in our opinion, the Expert shooter will have better luck with straight single-action operation.

This is because the single-action trigger was very good, and we found that the decocking feature operated via the ambidextrous thumb safeties was a plus. Here is how they worked.

With the hammer back, rotating the lever upward toward 10 o’clock turned the safety on. Pushing the lever downward parallel with the bore, or 9 o’clock, made the gun ready to fire single action. Rotating the thumb safety lever further downward to about 7 o’clock lowered the hammer for first-shot double action. The lever would then return to its rest position once again parallel to the bore.

We think that being able to quickly turn the gun “on” and “off” with the thumb safety greatly enhanced combat readiness, and we liked being able to decock the gun for administrative handling. Return to single action meant simply thumbing back the hammer.

The USP Expert shot [PDFCAP(2)] consistently, with average groups ranging from 2.0 to 2.2 inches between our three test rounds. Our total round count was in excess of 800 rounds, and we were not able to find any deterioration in accuracy.

We fired all shots with the thumb held above the safety, sometimes riding the lever while firing. We did not accidentally decock the pistol while doing this, and we never suffered a malfunction.

[PDFCAP(3)]
From a manufacturer famous for its single-stack 1911s, the Kimber Gold Match Ten II is a full-size 5-inch barrel 1911 with fully adjustable target sights, stainless-steel slide, and a polymer grip frame. The GM Ten II can accommodate a high-capacity double-column magazine without increasing width far beyond the dimensions of the typical single-stack 1911. Its magazines carried 12 rounds of .45 ACP ammunition. The Gold Match Ten II weighed in at 30 ounces, the same as the HK USP Expert 45.

The Gold Match Ten II was intended to be the most accurate of the five models that make up the Ten II series. The key to this improved accuracy was, according to Kimber, extensive hand fitting in the company’s Custom Shop.

The Gold Match Ten II came with an adjustable rear sight closely resembling the Bo-Mar design with a fully lined rear face to reduce glare. Other features we liked were the cocking serrations front and rear and the glare-cutting matte finish on top of the slide. The slide stop was fully checkered, as was the magazine release. A competition-style trigger, adjustable for overtravel, released a skeletonized hammer. The Gold Match Ten II provided a thumb safety only on the left side.

Before taking our first shots, we stripped the Gold down for inspection and lubrication. Removing the top end required a bushing wrench (supplied), but neither disassembly nor reassembly presented a struggle. Even with the presence of the full-length guide rod, we had an easy time replacing the cap and spring. Inside the Gold we found the machining to be clean and sharp. Dry as a bone, too. We also noticed that the disconnector spring was very strong, making compression difficult.

After the gun was lubed and ready to shoot, we took it to the range and immediately learned that the thumb safety, a point that had caused so much discomfort on the Tactical Custom II model reviewed in our November 2005 issue, was not a problem on this gun.

Next, we learned that the gun would not fully return to battery after every shot. We tried several different types of ammunition and each of the two supplied magazines, but the slide would stop short of closing by about 0.15 inch approximately 15 percent of the time. Curiously, this problem did not occur during day two of testing, where we fired from a sandbag rest. However, we were able to recreate this malfunction by compressing the grip safety and releasing the slide manually.

Despite initial problems, we were able to record some accurate groups. Loaded with the Black Hills 185-grain JHP rounds, our Gold Match Ten II was the top performer from the 25-yard bench. Average group size was 1.9 inches across, and we felt that this pistol was more accurate than we were. The heavier Hornady and Winchester rounds produced acceptable performance, but in our opinion, the 185-grain bullet was the key match-up for this pistol.

In terms of the grip provided by the polymer design, we would have preferred that the sides of the grip offered a degree of palm swell. This would mean a slightly rounded profile. Offering higher capacity but maintaining the same width as a single-stack 45 may be a good selling point, but most of our staff would prefer that the Gold’s grip sides were not flat.

The checkering molded into the front and backstrap surfaces of the Kimber gun were very good, however, well above what we normally see on a polymer pistol. We think the square grip profile combined with the checkering greatly favored a Weaver stance or a hold that features a push/pull technique.

Gun Tests Recommends
• Heckler & Kock USP Expert 45 .45 ACP, $1356. Our Pick. We preferred operating this gun as a single-action firearm rather than as a double-action pistol. But we liked the decocker as an extra safety. The USP Expert 45 proved to be rugged, reliable and very accurate with many ammunition brands.

• Kimber Gold Match Ten II .45 ACP, $1072. Don’t Buy. The Gold Match Ten II was capable of exceptional accuracy when we fed it the right ammunition, but its initial reliability problems would make us pass on it.