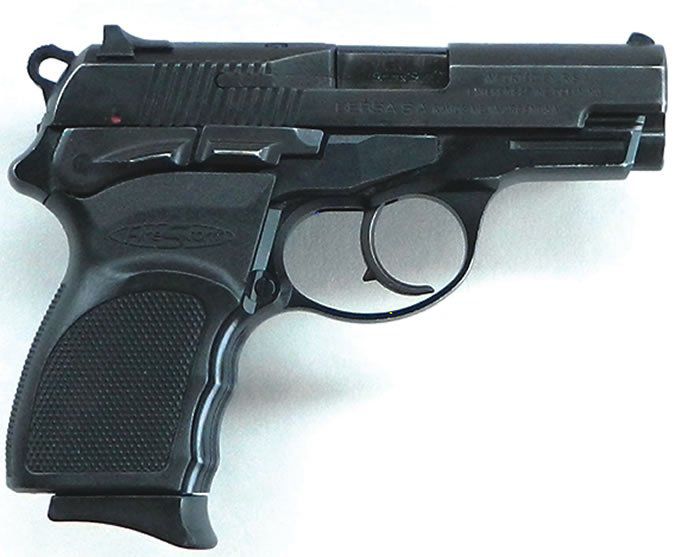 When it comes to personal defense, handgun owners have many strong preferences — cultural, generational, or even institutional. Former peace officers may prefer a pistol similar to the service gun they carried at work, and soldiers often choose a Beretta because they got used to feel of an M9. One of these preferences is for a double-action first-shot handgun, which some Gun Tests readers have mentioned in comments to the editor. While personal preferences are important and heft and feel mean a lot in concealed carry, the subjective cannot outweigh objective features. The handgun must exhibit good reliability, safe operation, and practical accuracy.

Two such handguns chambered in 9mm Luger we hoped would produce these qualities were a Smith & Wesson 908 and a Bersa 9mm. The Bersa has been known as the Mini Firestorm or the Bersa Pro, and is currently named the Thunder Pro Ultra Compact. We previously had tested (May 2006) a full-size Bersa Thunder 9 and said “Buy It.” We liked the workmanship, looks, feel, and performance of the 18-shot Bersa. Further, “If you want or need a good DA/SA nine that will shoot from dawn to dusk on one loading, this is an excellent choice, we thought. The gun looked about as good inside as it did out, and that inspired confidence.” In that review, we also mentioned “a smaller overall version…,” which is the Thunder Pro Ultra Compact. The current iteration of this handgun has a slightly different trigger guard shape, and it has a rail slot for a light or laser, but is functionally similar to our used sample. New, the 9mm comes in either a matte-black finish like our used test gun or a duotone version. There are also 45 ACP and 40 S&W chamberings in both finishes. We paid $300 for our test gun, and a new matte-black 9mm Thunder Pro UC was listed for $402 at CheaperThanDirt.com and $407 regular retail and $395 cash price at BudsGunShop.com — so around $100 more.

To conduct combat firing, we loaded the Winchester 115-grain full-metal-jacket rounds. Our shooters drew the pistols from a Rinehart Leather belt-slide holster (RinehartLeather.com). The drills began with a pistol fully loaded and hammer down with the safety on. We fired the first shot double action and transitioned, firing the remainder of the group single action. It was not difficult to make center hits at 5, 7, and 10 yards with either handgun. But we did have a preference, which we express below:

The Bersa tested was used, but seemed to have little wear. Like many compact handguns, it appeared to have been carried more than fired. Manufactured in Argentina, these pistols use a confluence of proven design features. The slide appears SIG like, and the pistol uses the SIG-type lockup, butting the barrel hood into the slide. The typical Browning locked-breech design uses an angled camming surface to unlock the action. The trigger mechanism, with its exposed drawbar on the right side of the frame, owes much to the Beretta.

The pistol was lubricated prior to firing. During this operation, no obvious tool marks were noted. Elsewhere, the slide was well machined with generous cocking grooves. The sights were good examples of combat sights, in which the rear sight was broad and easily picked up during speed drills. The white-outline rear sight and white-dot post front made a good combination, we thought. Also, the sights proved well regulated for 115-grain ammunition.

The large ejection port made administrative handling simple. There was plenty of room to eject a spent case or to clear a loaded cartridge. Trigger reach or span was adequate for most hand sizes, our men and women shooters agreed. The trigger action was smooth enough, with minimal stacking at the end of travel. The double-action trigger broke at 12 pounds. The single action trigger broke at a smooth 5.5 pounds. We found trigger reset to be rapid. A modest trigger stop is part of the trigger design.

The slide’s finish was even and not too worn, and the anodizing on the alloy frame was likewise smooth and even. The grips featured a modest thumb swell that the raters find comfortable. Minor point: The frame had a busy look with so many controls on the left side — takedown lever, slide lock, and a safety. The safety and the slide lock were ambidextrous.

The safety wasn’t difficult to manipulate as we came on target, we found. Muzzle flip was controllable. The pistol was as comfortable to fire as a 9mm handgun of this weight should be, we believe. A combination of good sights, a smooth trigger action, and good weight for the caliber gave good combat-shooting results.

The safety’s operation likewise received high marks. It was positive in operation, and a frame-mounted safety is much handier than a slide-mounted safety, in our opinion. While you may choose to carry the pistol with one in the chamber and safety off, relying on the long double-action trigger press for safety, there is no reason to do so. The frame-mounted safety of the Bersa pistol falls under the hand easily when the pistol is drawn and ready to fire. The safety also operates as a decocker. Press upwards on the safety and the hammer safely falls. While the controls look busy, at no time did any rater feel that the fingers were crowded and we didn’t touch any controls during recoil.

The pistol featured a push-button Browning-type magazine release which operated as expected. The well-made steel magazine had a 13-round capacity, and of course we would want more than one.

Field stripping and disassembly were easy enough using the takedown lever. The dual-wound recoil spring was short, but it worked well in controlling recoil.

We test-fired the pistol for accuracy using two self-defense loads, HPR 115-grain JHPs and Hornady 115-grain XTPs, as well as Black Hills 115-grain FMJs. The Hornady load gave the most accurate group, producing one 1.4-inch cluster at 15 yards. The average was 1.8 inches with this load. The pistol’s largest groups were 2.2 inches, on average. This is acceptable accuracy for a compact pistol, in our view. During the test, we experienced no failures to feed, chamber, fire, or eject.

Our Team Said: The Bersa 9mm pistol proved to be both reliable and accurate. We liked its handling and controls better than the Smith & Wesson. In particular, the safety location was more ergonomic. Though the used gun can be had for less money, we would strongly consider buying this gun new.

The Smith & Wesson 908 is a Value Line version of the S&W 3913. The 3913 Third Generation compact was stainless steel; the 908 compact is matte black. The pistol does not have an ambidextrous safety, and the machine cuts of the slide are angular and easier to manufacture than the 3913. The lockup and trigger action are the same as the S&W 3913 and similar Smith & Wesson firearms, all Browning short recoil and double-action first shot. The trigger action was comparable to the Bersa in quality and measured a pound lighter in double action. The single-action trigger compression was heavier, however, at 6.75 pounds. The hammer was a spurless design that is snag free, but we found it limits cocking the hammer for a deliberate first shot.

The sights were black plastic, with three white-dot inserts that provided an adequate sight picture. The front sight was dovetailed in place, with small plastic rods apparently holding tension. We would not attempt to adjust these plastic sights with a mallet and brass punch. Fortunately, the sights were well regulated for the 115-grain 9mm loads tested.

The magazine was supposed to accommodate 8 rounds,but the magazine would not seat with a full complement of eight. The slide is locked to the rear and the magazine inserted and the slide dropped for the 8-round capacity.

The grip was comfortable but angular. The pistol was lubricated and fired in the same manner as the Bersa, at 5, 7 and 10 yards with Winchester USA 115-grain ball ammunition. The pistol drew smoothly from the Rinehart Leather belt slide. Using a straight-thumb motion, we manipulated the slide-mounted safety with a degree of speed. The Smith & Wesson safety wasn’t as smooth and fast as the Bersa safety, we thought. The safety was positive in operation and worked well as a decocker. It simply wasn’t as ergonomic as the Bersa. The Bersa’s upward motion to decock required more effort, but there is no need for a speed decock. The frame-mounted safety of the Bersa was much easier to use than the Smith & Wesson. Also, when firing the Smith & Wesson, our shooters noticed its bore axis was noticeably higher than the Bersa’s, resulting in more pronounced muzzle flip. Though the pistol was comfortable to fire with all loads tested, the slide sits higher above the hand and simply isn’t as conducive to rapid-fire accuracy as a result.

In firing for accuracy off a solid bench, the Smith & Wesson 908 proved slightly more accurate than the Bersa pistol. The single best showing for the Smith & Wesson was a 1.25-inch group with the HPR 115-grain JHPs, although the overall average for the Hornady 115-grain XTP was smaller than the HPR load.

Back in the shop, we saw that the 908’s takedown procedure required that you lock the slide to the rear and press the slide lock to the left for removal. This slide stop was tight, and it took some effort to remove. In our view, the 908’s disassembly is not as handy as the Bersa, but there is seldom a need for speedy field strips.

Our Team Said: The Smith & Wesson was controllable and comfortable to fire, but it simply came up short in this test. We recognize, however, that some readers may have different preferences, so we’ll note the major areas in favor of each handgun. The Smith & Wesson 908 is slimmer in cross section, but taller than the Bersa. The Bersa has greater magazine capacity at 13 rounds versus 8, a total of 26 rounds versus 16 when you carry a spare magazine. Each was reliable. Accuracy results were close, with the Smith & Wesson posting a slight advantage at the bench. For us, however, the Bersa wins on ergonomics and handling, including a superior safety design and operation, better control in rapid fire, and a more pleasing grip.