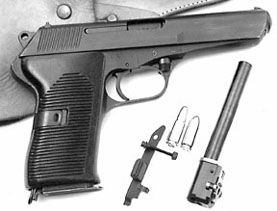 We periodically update articles that have appeared in Gun Tests. This month, we cover two items, one an aftermarket replacement barrel for a surplus pistol we liked, and the other a bargain .308 that outshoots guns that cost five times as much.

In the September 2002 issue we reported on the CZ-52, and mentioned that it was possible to alter that roller-locked, .30-Tokarev pistol into a 9mm very easily, with just the replacement of the barrel unit. As a follow-up, we contacted the folks at “makarov.com,” and obtained a brand-new 9mm barrel ($85, complete with roller assembly) to see how well it would work in our CZ. We also obtained a thumb-operated slide release, a special screw to install it, and a barrel-replacing tool.

We obtained a second copy of the CZ-52, our original test handgun having been purchased by one of our test crew. This second version of the CZ-52 was at least as nice as the first, and shot about as well with the normal .30-caliber barrel in place.

The 9mm barrel fit perfectly. We tried the altered handgun with a variety of 9mm ammo, including Winchester “WinClean” 115-grain BEB, Speer 124-grain and 115-grain Gold Dot HPs, and two types of round-nose hardball FMJ, 115-grain by Winchester and 124-grain by PMC. The 9mm rounds are shorter than the .30 Tokarev, around which the pistol was designed, and the short rounds had a long distance to jump from the magazine into the chamber. Some of them didn’t make it. The Winchester BEB with its truncated-cone nose shape, fed poorly. About half the rounds needed help getting into the chamber. Once in place, though, accuracy was outstanding. Ejection with all fired rounds was perfect. We did no formal accuracy testing, firing all rounds offhand, because we were far more interested in function than in absolute accuracy. But we can state that accuracy with that Winchester BEB load was all anyone would want, and that established the barrel as a good one, at least with those rounds that fit it.

We next tried the Speer 124-grain GDHP, and the first round stuck, going into the chamber. The shape of the bullet did not permit the round to chamber fully. The cartridge was stuck tightly, and in the process of trying to remove it we discovered a serious condition about the CZ-52, of which all owners should be aware. With the slide nearly a quarter-inch out of battery, pushing upward on the safety lever will drop the hammer, but the firing-pin lock is not engaged in that position, and THE GUN WILL FIRE. Our pistol fired into the ground, and it was frightening to learn about this limitation of the CZ-52 the hard way.

The 115-grain Speer GDHP worked well enough, and fed much better than the BEB Winchester. But the best and most reliable feeding was with the two types of hardball ammunition, which gave about 95-percent reliability or better, in our limited testing. Accuracy was on a par with the .30 Tokarev ammo. We think you should buy the 9mm barrel if you want added versatility for your CZ-52, but we would not recommend the combination in a serious “carry” situation because of the gun’s somewhat questionable feeding, even with the round-nose FMJ 9mm ammo.

The CZ-52’s slide locks open after the last shot is fired. The slide can only be released by pulling back on it with the magazine out, or with a loaded magazine inserted. Most modern handguns have some sort of thumb release on the slide stop. To modernize our CZ, we tried an aftermarket slide stop with thumb button from makarov.com, and ran into several problems. The instructions tell how to get the old slide stop out of the gun, but fail to mention that the axle of that part also restrains the takedown button and its spring. For those unfamiliar with the gun, such as ourselves, this lack of detailed instructions was a serious omission. When we drove out the slide-stop pin, the takedown button flew across the room. It could have hurt someone’s eye.

The new ($25) Compact Slide Release was retained by a thin bolt ($6) that went through the frame. There was a self-locking nut to complete the job. (Those on a budget could use the original axle.) The instructions told us to thread the nut on firmly, but that caused the slide release to bind completely. Per the website instructions, we had to partially unscrew the nut to get the proper motion in the slide stop. Next, we found the new slide stop stuck in whichever position we put it, even with the retaining bolt very loose. We took the slide stop out and polished the back of it, removing any trace of burrs. It still stuck. We measured the offset of the rearmost portion of the new, versus the old, part, and found the new part had 0.030″ less offset than the original. This portion of the slide lock goes behind a cutout in the frame, retaining the rear of the slide lock within the gun. We messed with bending, deburring, and refitting this part for a long time before we got it loose enough to try with the slide in place. Then it didn’t work. We found it would not lock the slide back unless we pressed firmly upward on the huge button sticking out the side. This would not do, we decided, and took the part out of the gun and reinstalled the original part. We didn’t like this aftermarket slide stop, and would not recommend it unless you really must have it, and then are prepared to spend a lot of time to fit it carefully to your gun.

The thumb button was far too big for original-gripped guns, but is apparently necessary with some wood grips, which are thicker than the original plastic grip panels. By the way, one of our test crew removed the panels of the original gun and put some silicon rubber on the edges, and that got rid of the slight looseness of the panels. We did the same to this second example of the CZ-52.

CZ-52 9mm barrel, $85. Buy It. The barrel went into place easily and quickly, and it gives the shooter the option of firing the more common and cheaper 9mm Parabellum ammo. There are many other options for CZ-52s and of course for Makarovs, at www.Makarov.com. For the CZ-52 parts, go to: http://makarov.com/cart/vitemcz52.htm. Or call (866) 625-2768.

Some time back, we tested Fulton Armory’s FN Police Special and found that it put the multi-thousand-dollar Robar and Dakota HB .308 rifles to shame, in that the FN offered low cost combined with high accuracy and quality. Sadly, Fulton no longer offers that rifle. Yet those in need of a very precise, high-quality, heavy-barrel .308 need not fret. Savage’s Model 12VSS will fill the bill nicely, and won’t break your bank.

We acquired one of these fine rifles recently, equipped with a John Plaster-designed stock (by Choate), and put it through our range-testing wringer.

When we unpacked this rifle, we immediately noticed a few things about it. For a few seconds, we thought we were unpacking a Dragunov, because of the stock design. But it was indeed a stainless-steel Savage, complete with a stock that acknowledged its worthy designer with a dedication inset into the stock. It read, “Designed by Major John Plaster. Manufactured for Savage Arms, Inc., by Choate Machine & Tool Company.”

Maj. John L. Plaster, USAR, (Ret.) is the author of “The Ultimate Sniper (An Advanced Training Manual for Military & Police Snipers),” one of the very few good books on sniper training. (Our copy is by Paladin Press, Boulder, CO, 1993.) Much of Col. Plaster’s experience went into this stock, and our reaction was that we liked the stock very much. Within the box were a shorter buttpad to shorten the pull, and a higher cheek piece to raise the shooter’s eye if desired. The forend had a multi-position receptacle for a shooting sling, and a similar device beneath the butt. The buttpad was firm but worked very well. The stock was matte black, and nicely finished. The forend was wide to accommodate almost any shooting rest, and we really liked the pistol-grip shape of the stock. It let us control the trigger with great ease.

The matte-finished, fluted, 26-inch barrel had a recessed crown and was fully floated within the stock, all the way back to the receiver. The bolt knob was large for easy grasping, and its operation was very smooth throughout its length. The blind magazine held four rounds, and a fifth could be slipped into the chamber if desired. The trigger pull was crisp and clean, and broke at 2.0 pounds, one of the best factory triggers we’ve encountered.

The receiver was drilled and tapped for scope rings, and thankfully the holes didn’t have those little throw-away plugs. The receiver also held the safety, which was a sliding tang-mounted lever. Forward was the firing position. All worked well. On the right rear of the receiver was a lever that permitted the bolt to be withdrawn. To press it down, you had to first press and hold the trigger rearward. This lever also had to be pressed downward to reinsert the bolt. The recessed bolt face also held the extractor and a plunger ejector.

mounted our 36X Leupold and gathered some of the same ammo we used to test the Fulton and previous HB .308s, Winchester Supreme Match and Federal Gold Match. At the range we found, first of all, that feeding was extremely smooth either from the magazine or by just laying a round into the opening.

The trigger proved to be a dream on the bench, and everything else worked perfectly. We had no complaints about this rifle whatsoever.

Accuracy proved to be best with the Winchester Supreme ammo, which used Nosler HPBT match bullets of 168-grain weight. We diligently cleaned the barrel during our shooting, much as we had with all the previously tested rifles. All our groups were on the order of half an inch for three shots, and it didn’t seem to matter if the barrel was clean or dirty, hot or cold. The Savage laid ‘em in there nearly on top of each other when we did our part.

This particular rifle didn’t seem to like the Federal Gold Match nearly as well, and got groups around the 1-inch mark with it.

Savage Model 12VSS, $628. Best Buy. The Savage Model 12VSS was an outstanding rifle, one that would be our choice of all the heavy-barrel .308s we’ve tried thus far. It was also the cheapest (with a street price of around $550), and we believe Savage will sell these by the carload. 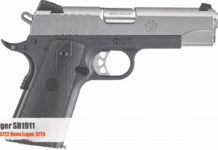 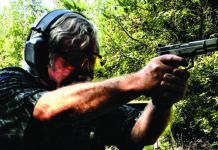 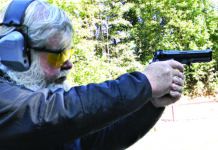