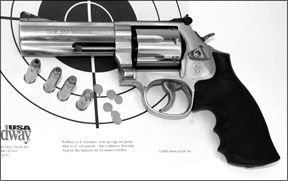 In our August 2006 issue we reviewed three different .357 Magnum revolvers with 4-inch barrels. The 4-inch magnum is the traditional configuration for the uniformed policeman, and despite the overload of semi-autos now available, the revolver is still a popular sidearm. Each of the guns in our first test, the $615 Ruger GP100, Taurus’s $469 M66SS4, and the $646 Smith & Wesson Model 619 were made in the United States.

Since then we have come across a foreign made product that begs comparison to these guns. This was the Alfa Steel .357 Magnum manufactured in Czechoslovakia. We also decided to revisit the Smith & Wesson catalog and test the seven-shot model 686 Plus, catalog number 164194 ($790). Both guns featured a full underlug that enclosed the ejector rod and added recoil-opposing weight beneath the barrel. Each gun offered a ramped front sight with orange-colored insert and a rear sight that was adjustable for windage and elevation. Both guns used a flat-faced hammer and frame-mounted firing pin. Other similarities included finger-grooved grips and counter-clockwise rotation of the cylinder.

Let’s see how well this newcomer stacks up against the field.

Visiting the Alfa Proj website, www.alfa-proj.cz, was a lesson in why word for word translation is not always accurate. In this case the syntax becomes slightly skewed. For example, the Alfa model 3561 with 6-inch barrel was described as being, “a challenge for hunters using short guns.”

Rather, we think they meant to say this gun is up to the challenges of hunting with a handgun. Nonetheless, much of the focus of the text regarding Alfa’s seven different models chambered for .357 Magnum has to do with each gun’s suitability for security and police work. The domestic source of Alfa Proj guns is the Shelton, Connecticut, office of GunXUSA. Visiting the gunxusa.com website, we learned that Alfa Proj is a relatively new company beginning in 1993. Overall, they are the second biggest producer of small arms in the Czech Republic. According to GunXUSA, availability of the Alfa revolvers should be greatly increased by July of 2007.

Our model 3541 with 4-inch barrel would be the typical Service model. Available with a blue or chrome finish the cost was the same. The barrel was blue inside a bright chrome-plated shroud. The hammer, trigger and sights were also blue. So was the ejector rod and ejector star.

The grip was wood with deep finger grooves and thumb rest. The front strap was measured to be longer than on the Smith & Wesson primarily because the grip was undercut placing the middle finger higher between the trigger guard and the grip frame. The back of the grip was smooth and covered the rear of the frame. There was quite of bit of sharp stippling cut into the front and sides of the grip. We liked the contour of the grip, but the first staff member to shoot the 3541 received a small but bothersome cut on his left palm. We checked the grip for additional flaws and found none.

The flash shield that covered the rear of the cylinder was relieved at approximately 8 o’clock. This told the shooter whether or not there were shells in place. But we think this was inconsequential because there was no way of telling whether or not the ammunition was live or spent. The cylinder latch was contoured to offer greater clearance during loading and unloading and lined for grip. But the chrome coating made it slippery nonetheless.

The cylinder featured numbered chambers. This can be helpful in keeping track of differences in velocity they produce. But the numbers were on the front of the cylinder. Referencing them was awkward at best, requiring that the shooter turn the gun around and face the muzzle. With the cylinder open (Alfa refers to this as the “swinging console”), we saw that the mouths of each cylinder were recessed, allowing the individual cases to seat flush with the face of the cylinder. The location of the ejector star was strengthened by two pins. The tip of the ejector rod did not take part in lockup, but we could see added material where the crane meshed with the frame for extra detent.

The rear sight was in appearance very similar to the Smith & Wesson design. It was smaller in each dimension and adjustment was eccentric in comparison. To raise elevation the top screw was turned clockwise. As the screw was turned the entire rear unit would raise and settle pushing the sight upwards and away from the top strap. By the end of the test the portion of the unit connecting to the top strap looked like it was losing its spring and appeared to be slightly bent. Changing the windage adjustment required a different size screwdriver than the one used for the elevation screw. The elevation screw required a driver of common size, but the windage screw was much smaller, one that might be part of an eyeglass repair kit. Due to the limited amount of leverage we could muster with the little screwdriver, moving the rear sight left or right was very difficult. No tools were supplied.

At the range we first engaged all targets double action only. Unfortunately, we found the double-action trigger to be almost unusable. Yes, rounds would ignite, but the weight of the trigger, coupled with some incredible mechanical resistance, made it tough. We found it actually quicker to press the trigger, back off and then press it again. The hammer was powered by a coiled mainspring, but the source of the mechanical resistance was likely the result of a poor match between the hand and the ratchet. When the trigger is pulled a hand protrudes from the breech face, connects with a single ratchet and “stirs” the cylinder. The relief in the breech face was on the right and moving upwards produced a counter-clockwise motion. This characteristic was shared with the Smith & Wesson revolver. However, the ratchets on the Alfa were simply round pegs. The ratchets on the Smith & Wesson had a contour that smoothly introduced the hand to the ratchet, a wider central section that provided leverage to turn the cylinder and then another contour guiding the hand to smoothly disengage. We had to wonder if we had a gun that missed a step in the machining process. Ultimately we were convinced to fire this gun single action only at all times.

We find it hard to believe that a defense gun, let alone a police revolver would not be fully ready for rapid double-action firing. To the Alfa’s advantage our accuracy tests were completed single action only. The single action of the Alfa was very good, actually weighing in at 4 pounds, some 2 pounds lighter than the 686. Results showed that the Alfa revolver was acceptably accurate firing both the 148-grain .38 Special match wadcutters and the 125-grain JHP magnum ammunition. The 158-grain JSP rounds proved more erratic. During our tests from support we suffered several malfunctions and one breakage. A section of the pivot pin on which the cylinder crane swung from the frame broke off. But the crane stayed in place, and we were able to continue shooting.

During our tests the trigger did not always return to its forward position without help from the shooter. On several occasions the firing pin failed to contact the primer or supply enough force for ignition. On two occasions the cylinder would not lock up. A malfunction such as this is usually the result of firing many rounds of hard recoiling ammunition. But we had not abused the Alfa, in our view. We had only fired about 150 rounds of 125-grain JHP .38 Special ammunition in our preliminary shootings. Our bench session consisted of approximately 150 rounds more, many of which were light target loads.

In comparison to our test of the Alfa revolver, our session with the seven shot Smith & Wesson 686 Plus was uneventful. We loaded it, we fired it. Whatever adjustment to the sights was necessary was completed quickly and easily with a single screwdriver.

The single-action trigger was heavier than the Alfa’s. But before we knew it the shot was gone. The double-action trigger was better than the action we found on the Smith & Wesson 619 in our last test. The gun was very well balanced, and despite the exposed backstrap of the rubber Hogue Monogrip the level of comfort and control was all we could ask for.

The ejector rod played a part in lockup and the ejector star was kept from turning by meshing with the outline of each chamber. This did away with the need for anchoring pins pressed into the cylinder face that can break off. The cylinder latch was contoured and taking a further cue from custom gunsmiths its surface was finely checkered for a sure grip. The sides of this stainless steel revolver were brushed in an understated manner and the top strap was treated to a matte finish to reduce glare. Originally, a sister model offered in blue steel was dubbed the 586. Today, the 586 is available as a special ported model only.

At the range we saw that the sights were sturdy and clear. The white outline on the rear sight notch wasn’t really noticeable, and not one of our staff really remembered it being there until after they had shot. Accuracy from the bench shooting the .38 Special Black Hills 148-grain Match Wadcutter rounds was outstanding. One group barely measured an inch across. Our average group size measured 1.2 inches center to center.

The Black Hills 125-grain JHP .357 Magnum ammunition proved nearly as consistent as the light recoiling wadcutters. But the range in group size was measured to be between 1.7 inches to 2.0 inches. Firing the American Eagle rounds manufactured by Federal produced the largest groups, but a 25-yard average size group of 2.3 inches packed with about 550 ft.-lbs. of muzzle energy would be the envy of many other handguns.

In our August 2006 test of .357 Magnum Service revolvers the Smith & Wesson model 619 was bested by the Taurus and Ruger products. The M619 had its advantages, lower cost, indestructible sights, and the ability to shoot the American Eagle 158-grain JSP rounds better than its competitors. But in the case of the 686 Plus, we felt that adjustable sights and an ejector rod protected from damage were important issues that besides superior accuracy put it ahead of the 619, in our opinion. The 686 Plus is more expensive than the others (by about $160 on average). But it also carries an extra round, and the action was very good.

The Ruger GP100 may have made the hottest magnum rounds easier to handle, but based on accuracy alone the 686 Plus might have landed on top in our previous test.

Don’t Buy. The double-action trigger was stiff and unpredictable, making it unsuitable for rapid fire. Several malfunctions and breakages occurred during our testing.

The 686 Plus covered all the bases. Consistent, accurate, and packed with seven rounds of either .38 Special or .357 Magnum, makes this gun a top choice.