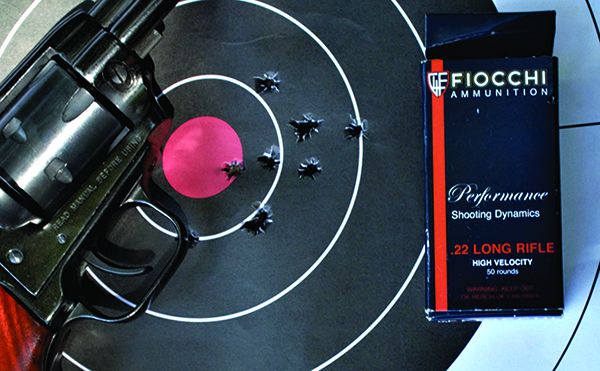 This Rough Rider is readily available at many outlets, usually the 45⁄8-inch-barrel version with only the 22 LR cylinder. The revolver illustrated , however, was supplied with a 22 Magnum cylinder. We found it new on the shelf and went with it. The cylinder was handy and available locally. We did not mind paying $21 extra for the Magnum cylinder. Because the original intent was to test only 22 LR revolvers, this is an interesting side benefit. (Some models of the Chiappa are also offered with a Magnum cylinder.) The Heritage revolver is a fresh design that isn’t based on the Ruger Single Six or Colt Scout. It is a purpose-designed 22-caliber single-action revolver. The revolver is manufactured from inexpensive material and makes use of various MIM, composite, and non-ferrous alloys. The cylinder and barrel are steel. The cylinder is well fitted, and the pivot pin isn’t difficult to remove to clean the revolver or to change the cylinders. The trigger guard is squared more than the usual single-action revolver. The action is smooth enough, breaking at 4 pounds even.

The Heritage Rough Rider is loaded by placing the hammer on half cock. With the loading gate open, the chambers are loaded one round at a time. The action is positive. There is none of the fuzziness or difficulty loading like we found with the Chiappa revolver. While the Ruger doesn’t require the hammer be placed on half cock to load, the Heritage revolver is rated as smooth and positive in operation as the more expensive Ruger revolver.

The Heritage features a floating firing pin mounted in the frame. This is not a transfer-bar revolver, although it does feature a safety notch in the action. After loading, a slight tug and the hammer clicks into the safety notch. While well and good, we don’t trust a single-action revolver safety notch. The Heritage also features a manual safety, unique among single-action revolvers. While various hammer-blocking safeties have been attempted, some of them attached to the hammer, the Heritage is a workable safety. The safety is moved to block contact between the hammer and the floating firing pin, and moved away to allow firing the Heritage revolver. The safety isn’t difficult to move to the Fire position when you begin to use the revolver. While more complicated than simply using a transfer-bar system, the safety lever is novel and works well. We practiced moving the safety to Fire on the draw without difficulty. Just the same, for the non-critical use we would put this piece to, we recommend loading one empty chamber in the cylinder under the hammer. Load a cartridge, skip a chamber, load four, cock the hammer and lower on an empty chamber.

While firing the revolver in fast-paced drills, we found the Heritage Rough Rider proved to be an able plinker and fun gun. Overall times were comparable to the Ruger, with little to choose from between the two. While single-action revolvers are not noted for speed of loading, the Ruger and Heritage were similar. We liked the Heritage and its positive clicks when indexing the trigger better than the Ruger’s free-spinning pawl. But then, some true Single Action Shooting Society competitors like the ability to quickly run the cylinder forward and back. The Chiappa revolvers, with their fast handling and nicely shaped grip, handled quickly as well.

The Heritage was well regulated for 40-grain bullets, striking to the point of aim at 10 yards. In absolute accuracy, the Heritage was nearly as accurate as the Ruger, with the difference being small statistically. So, for less money, the Heritage gave better performance, overall, than the Ruger when you consider the cost per dollar formula. An additional strong point for the Heritage Rough Rider is the 22 Magnum cylinder. With the single 22 Magnum load tested (CCI Mini Mags), the Heritage broke 1340 fps, faster by almost 300 fps than the Winchester Super-X 22 LR hollowpoint. This makes for greater versatility, even for those who only occasionally intend to use the 22 Magnum cylinder.

Our Team Said: We like the transfer-bar safety of the Ruger better than the Heritage manual safety. But when the performance was added up, including fit and feel, smoothness of action, and the feel of the grip, as well as the sight picture, the Heritage and the Ruger Wrangler are very close in performance. When you add the Wrangler’s higher average price, the Heritage is the better buy, and is for us the Best Buy in this test.