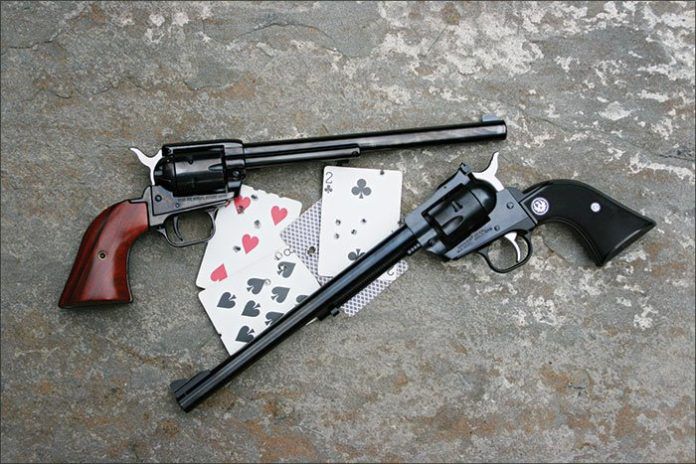 A Buntline is commonly known as a Single Action Army (SAA) revolver with a barrel of 12 inches or more. They are mostly associated with Wyatt Earp of the gunfight at O.K. Corral fame and Ned Buntline, where the revolver gets its name. Buntline was a dime novelist who penned Western sagas about cowboys, outlaws, and other gunfighters. It is agreed that much of Buntlines writing was more fiction than fact, so if Ned could take some poetic license, so did we calling these long-barrel rimfires Buntlines. The Heritage Manufacturing Rough Rider and Ruger New Model Single-Six Convertible are scaled down Buntlines with 9-inch barrels – the Ruger actually has a 9.5-inch barrel. After the team stopped yukking it up about the odd-looking long-barreled revolvers and saying things like: You need to tie a red warning flag to the end of the barrel or You need to move the target out a few more yards, the muzzle keeps hitting it or Were going to need a longer range rod, we all got back to our senses and found a lot to like in these long-barreled rimfires.

Both revolvers are blued, single action and came with two cylinders, one for 22 LR and one for 22 WMR. One thing to be aware of with a 22 rimfire convertible revolver is that the bore diameter for a 22 LR and a 22 WMR are different. Nominal dimensions are .220 for the 22 WMR, and .217 for 22 LR. Generally speaking, the 22 LR is more accurate than the 22 WMR, and there tends to be more consistent velocity and pressure on the LR rounds.

Ruger New ModelSingle-Six Convertible#0624 22 LR/22 WMR, $569
Before testing, we used a range rod to check the chamber alignment of all the chambers to the barrels in both cylinders for both revolvers. Our range rods from Brownells (Brownells.com) have a 10.5-inch handle with 2.5-inch heads, so we had just enough rod to get the job done. The Ruger had no issues. The rod freely slid through the bore and chamber, coming to rest on the recoil shield for both cylinders.

The New Model Single-Six Convertible in hand felt more substantial and hand filling than the Heritage. Testers liked the heft and feel. The Ruger sported a well-executed blue finish with a hammer and trigger that were both in the white along with black plastic grips. It was a sharp looking revolver. When cocking the Ruger, it felt more refined. It was tight on all chambers; no wiggle.

The sights were excellent, giving the user a thick front blade with just enough gap on the sides when viewed through the rear notch. The rear sight was adjustable for windage and elevation using a small flat-blade screwdriver. The hammer was serrated and gave the cocking thumb a good grip. The trigger was wider and had a comfortable curve. All was aces until we started loading. If we indexed the cylinder too much, we had to skip that chamber and go on to the next. It took longer to reload, until we got the rhythm down.

Unloading, we had the same issue. The ejector head was a small button; we had to make sure the tip of our finger didnt get burned after extensive shooting. A reverse indexing pawl would be an excellent addition to this Ruger. Loading the Ruger was a simple procedure: Open the loading gate and fill the chambers. No need to rest the hammer on a empty chamber as the New Model Single Six has a transfer bar built in that avoids accidental discharge if the revolver is dropped with a round under the hammer.

We noticed with both revolvers, after extensive shooting that dry lube on the cases and burned residue would get trapped under the rim of the cartridge. We needed to make sure the cartridge was seated all the way in the chamber, or we could feel the cartridge base scrap along the recoil shield when cocking the hammer and the cylinder rotated. We found the Rugers counter-bored chamber became sticky sooner than the Heritage due to the rear design of the cylinder.

Swapping cylinders required the user to open the loading gate, press the base pin button, and pull the base pin free from the frame. The cylinder would then drop out of the right side (loading gate side)t of the revolver. This operation had no hitches and was fast and easy to execute.
Our Team Said: The Ruger was built better, in our estimation, which was reflected in the price. We would like Ruger to install a reverse indexing pawl like they do in their New Model Vaquero to make loading easier.

Heritage Mfg. Rough RiderCombo #RR22MB922 LR/22 WMR, $230
The Rough Rider had a tight lock up on most chambers; we did experience some being looser than others in both the LR and Mag cylinders. With the cylinder removed, the range rod slid freely through the bore with the head stopping on the recoil shield. When we inserted the cylinder and started to test the chambers, we noticed a very slight misalignment in the 22 WMR cylinder in which the rod did not slide freely through the barrel and into the chamber. The 22 LR was better. We did not think the alignment was so bad that we had to reject the revolver, but we expected to see some chambers not shoot as accurately, and we did.

This diminutive Buntline has a frame of aluminum alloy and a steel barrel and cylinder. A blued finish was nicely executed on the metal. The hammer was left in the white and contrasted agreeably. Grips were smooth cocobolo, and in hand, the revolver was much smaller than a traditional SAA. Testers thought this might be a nice revolver to start young shooters on because of the grip and the thumb safety, a feature missing on the Ruger.

On the left recoil shield was a safety lever that fell under a right-hand shooters thumb. Rotated up, it blocked the hammer from hitting the firing pin; rotate it down to fire the gun. The thumb safety looked odd on a SAA-style revolver, but it added an extra level of safety. The trigger was centered in the frame, unlike a traditional SAA trigger. It was smooth with a slight curve that was comfortable to press. The hammer wore an aggressive checkering and made cocking the hammer slip free. The loading gate was easy to operate.

Changing cylinders was a simple task. The base pin wore a fine knurling. We would have preferred something a bit coarser so that after extensive shooting and crud build up, the pin is easier to pull free from the frame. The rear of each cylinder was recessed so when cartridges were inserted, the base of the cartridge was flush with the outer edge of the cylinder.
Load the Rough Rider like any traditional SAA revolver. To ensure the hammer rests on an empty chamber, first cock back the hammer to half cock, open the loading gate and load one chamber, skip the next chamber, load the rest. Loading small cartridges into the Rough Rider was easier than with the Ruger, we thought. There was more wiggle room with the cylinder in case you indexed the chamber too much. Unloading empties was a bit easier, too. Magnum cases were the most stubborn to eject, but the ejection rod and gravity worked together to remove them.

What we found with these long-barrel revolvers was that muzzle blast was way in front and was less noticeable, something else to think about when introducing new shooters to pistols. We also tested at 15 yards, since the Heritage had a fixed sight and the Ruger an adjustable one. We were quite pleased with the Heritages accuracy. The slight misalignment seemed not to affect the performance most of the time, though we did notice we threw a shot per cylinder.
Our Team Said: Overall, we thought the Rough Rider was a fun gun to shoot, and it would be deadly on squirrels. We did see some of the bluing start to wear on the butt, and the front blade sight loosened but a dab of epoxy fixed the problem. The Rough Rider was hard to beat for the price.