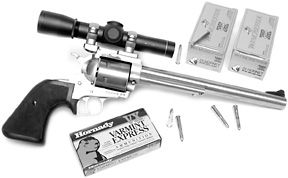 The Taurus Raging Hornet and the Magnum Research Biggest Finest Revolver (BFR) are two visually striking weapons. The Raging Hornet is a modern design that in function could be considered a throwback to the revolver-action carbines of old, but with a futuristic look. The BFR carries the profile of a super-sized cowboy gun available in a variety of calibers, including a .45 Colt/.410 shotshell combo gun.

One might legitimately ask why any manufacturer would market such way-out designs in an uncommon cartridge, especially when both are expensive and many rifles chambered for the Hornet offer superior accuracy for considerably less money.

But we realize the BFR and the Raging Hornet do have a niche: They are compact varmint killers. Moreover, maybe Taurus and Magnum Research, two companies that thrive on the unusual, just wanted to build something that would be fun. As soon as we fired our first string of shots, we knew that at least the latter statement was true.

Range Session
On a gun whose iron sights yield 11.4 inches of sight radius, but which comes with a free scope mount, we knew we had to fire the Taurus utilizing both the open sights and a scope. We set our distances at 25 yards for the iron sights and mounted an Aimpoint 5000 2X with a 3-MOA dot for shooting at 50 yards. We chose this sight because it sets up quickly and because the eye relief would not be an issue. Also, 2X power would be all we needed to shoot accurately at 50 yards. The BFR arrived with a Leupold M8 2X scope mounted and adjustable rear sight packaged separately.

Our test ammunition included a comparison of two Winchester cartridges pitting 45-grain soft points versus 46-grain hollowpoints. The third choice was Hornady’s 35-grain Varmint Express. All recorded shots were fired from a sandbag rest. Here’s how the guns performed.

Taurus Raging Hornet M22H, $898
Unlike a rifle, this is a very difficult gun to shoot unsupported. Otherwise, it is effective and fun. On first impression, the Raging Hornet’s massive 9.9-inch underlug barrel dominates the eye. At a total weight of 82 ounces with the supplied scope mount installed, much of the weight is forward of the grip frame.

It is hard to say if the .22 Hornet produces a lot of recoil, because it was thoroughly smothered by this muzzle heavy design. Taurus also installs a one-piece grip that includes a special Hornet-yellow insert on the backstrap that absorbs extra shock. This same insert is red on the 454 Casull model and helps allay the blast of that mighty cartridge. Frankly, it is not needed here because the report outweighs recoil.

Our shooting consisted mainly of firing groups at 25 and 50 yards single action only. We wanted to shoot double action offhand through the chronograph, but we found supporting the gun and modulating its rough DA trigger to be difficult. We chose not to put our prize Oehler chronograph at risk. Ultimately, we developed two DA ways of shooting the M22H standing. One was supporting the gun by holding on to the scope with the weak hand. This is a standard steel-silhouette method, but it demands that the scope be solidly mounted to the gun. Unfortunately, we don’t have much faith in the way the supplied mount is fixed to the frame. The connecting lugs are flexible, and you end up depending on the relative profiles of the top strap and the underside of the scope mount plus Loc-Tite to keep it squarely in place. Most of the problems we encountered zeroing the scope were in fact traced back to the shortcoming of this arrangement.

The other method of firing unsupported involved the use of good old American ingenuity. In other words, cheating. We used the Steady strap from Cylinder & Slide, (877) 434-8680, which connects the neck with the thumb of the strong hand. This may sound odd, but it did add confidence and reduce the wobble zone of the dot as we struggled to support the firearm.

On the other hand, the Raging Hornet is one of the easiest guns to shoot from a sandbag rest we’ve ever encountered. The big V-shaped underlug takes to sandbags and just about holds itself up. At 25 yards, using iron sights we rate only as acceptable, each load produced at least one sub-1-inch group. Winchester’s 45-grain soft point was king at 0.65 inches. Winchester’s 46-grain hollowpoint was more erratic, ranging from 0.9 to 1.9 inches. Hornady’s spread was only from 0.8 to 1.2 inches, and this tight patterning continued when we added the Aimpoint scope. At 50 yards the 46-grain round showed four-shot groups of 0.5 to 1.1 inches. But adding the fifth shot ballooned groups to a range of 1.8 to 2.2 inches. The Winchester 45-grain soft point continued to be more consistent than its hollowpoint brother and achieved an average of less than 1.5 inches. The Hornady Varmint Express was the big star at 50 yards, with not only a best group of 0.8 inch but also more than one group measuring 1.3 inches. Four-shot groups within these patterns measured as little as 0.7 inch.

If the Raging Hornet were truly a rifle, we would say that as a bench rest weapon it has potential. As a target gun, it may be just too heavy. As a steel silhouette gun, there are some interesting possibilities too. But if we were considering buying the Raging Hornet, we would have to say it is mostly a fun gun that, under some circumstances, can do the job of a rifle. If we did buy one, however, we might want to cut the length of that heavy barrel to about 4 inches, refine the DA trigger action, and then have some serious fun.

Magnum Research BFR 22H10, $999
Until recently, the Raging Hornet has been the only extra-large revolver available in .22 Hornet. According to Accurate Powder Loading Guide Number One, only one other handgun, the Thompson Center Contender, fired the .22 Hornet.

But that changed with the arrival of the BFR 22H10, code name Little Max in the Magnum Research brochure. Now, a total of nine handloads are listed by Accurate, with bullet weights ranging from 40 to 50 grains at velocities of 1,780 to 2,397 fps. But our experience firing the BFR showed us that a lighter bullet of a mere 35 grains (commercially loaded by Hornady) was the ticket for accuracy. This load shot very well in both guns, but it excelled in the BFR at 25 yards, with an average group size of just 0.6 inch. The supplied front sight is an orange serrated ramp set upon a stanchion, not only because extra height is needed, but because the thick barrel is round and this platform is necessary to seat the blade. The BFR averaged groups of 1.4 inches at 50 yards with this round.

Despite that the Raging Hornet is a modern double-action gun with single-action option, and the BFR operates by single action only, firing each gun single action offers only a slightly different feel. The big difference is what comes before and after. To load the BFR you first open the loading gate. No manipulation of the hammer is needed to free the cylinder. Much like the Ruger single-action revolvers, the hammer stays safely in a down position. Each cylinder clicks into position, letting you know it is properly indexed for loading. Firing involves pulling the hammer all the way back (there is no half cock or other intermediate position) and pressing the trigger. To unload, simply open the gate, line up the chambers and push out the empty cases by sliding back the ejector rod. There is a lot of meat between chambers since only six small holes are drilled into cylinder. In fact, it was our observation that it shot better when hot. Revolvers, especially ones with a lot of steel between chambers, can stand heat better than most rifles. Revolver barrels are shorter and more rigid. Also the greatest amount of heat is expended inside the chambers, which are not connected to the barrel.

Oddly, the single-action BFR was easier to fire standing. While 71 ounces is not light, we could get away with shooting the gun unsupported on a limited basis. The BFR also comes with a rubber grip by Hogue, (800) GET GRIP, which is highly functional, but for use with the loud but pleasant recoil of the .22 Hornet, we might order the optional Hogue wood grips of Pau Ferro or Goncalo Alves.

Gun Test Recommends
Taurus Raging Hornet 22H, $898. Buy It. The Raging Hornet fulfills its mission as a compact varmint gun. If we were willing and able to spend $898 on this gun, we would certainly spend a little more for custom work on the trigger and scope mount as well.

Magnum Research BFR 22H10, $999. Buy It. The BFR, like the Raging Hornet, strikes a chord. We would have to rate the workmanship of the BFR superior to the Taurus. We recommend it if you need a hunting iron without the recoil of the harder hitting calibers meant for bears and large game.