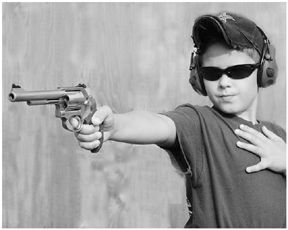 Ask “What’s new?” in the world of small revolvers, and a likely answer would be frames and cylinders made from “space age” materials such as titanium and scandium. But ask, “What will last?” and a likely answer would be steel small-framed revolvers. Despite a spate of new revolver materials, many consumers look at the attached high prices for new wheelguns and turn back to stainless steel for its durability, timelessness, and comparatively low cost. We recently tested three such revolvers in .38 Special and .357 Magnum to find out which one we would buy.

They were the Ruger KSP-821X, a .38 Special-only five-shooter and two more five-shot guns from Smith & Wesson. The model 60-15, like the Ruger, is a short-barreled 3-inch “snubby.” The 60-18 sported a 5-inch barrel. All three guns were constructed of stainless steel, but the Smith & Wesson revolvers had slightly longer cylinders to provide the option of firing .357 Magnum ammunition.

Our test ammunition, therefore, included a .38 Special match-grade target load, two different .38 Special +P rounds and two choices in .357 Magnum. We fired shots of record single action only, from a sandbag rest at 15 yards. To gauge each gun’s operation, we also fired offhand shots double action only. Here’s what we learned.

The model KSP-821X revolver is listed as a double-action member of the SP101 family. There are eight different offspring in the SP101 family, which are chiefly recognizable by their frame size. All SP101 revolvers are constructed of stainless steel with a satin finish, but chamberings include .22 LR, .32 H&R Magnum, .38 Special, and .357 Magnum. Barrel lengths vary from 2.25 inches to 4 inches. Our KSP-821X was a .38 Special only model with a listed barrel length of 2.25 inches. However, we measured the barrel, which had a recessed crown, to be slightly more than 2.35 inches long.

We thought the satin stainless-steel finish was appealing and stood up well to cleaning fluids and contact with unfriendly surfaces such as an old shooting bench or unlined holster. Fit and seam work on the frame panels was first rate. Smaller from top to bottom than our other two revolvers, the Ruger was one tough little brick of a weapon. The barrel shroud was beefy and fully enclosed the ejector rod. The ejector rod did not take part in locking up the cylinder, but a spring-loaded detent on the front of the crane did. A release button on the left side of the frame unlocked the cylinder, unlike the sliding latch on the S&Ws.

Using a range rod, we tested all three guns for cylinder alignment. Part of this test required pressing the trigger in double action, which rotated the cylinder to activate the stops that protrude from the frame just above the trigger. These stops slip into a notch on the outside of the cylinder to halt rotation and index each chamber to the bore. If the hammer falls before the tester hears the click of the cylinder stops falling into place, the gun is likely firing out of time. None of our guns were out of time.

The grip on our KSP-821X was the familiar Ruger modular design with a rubber body and synthetic grip panels. The grip had an indentation on the left side meant for a thumb-down hold, which favored right-handed shooters. The hammer had a wide, stubby tang. Above the tang was a cleanly cut rear-sighting notch in the top strap. The front sight was a shallow ramp design, colored flat black for contrast. This color, along with fine lines cut 90 degrees to the bore, served to reduce glare.

At the range, we found the modular grip felt neutral and fit a variety of hands. Nobody on our staff raved about the grip, but then again nobody had any significant complaints about it either. One problem we might note, however, was the lack of contour at the edges of the trigger. The sides of the trigger were machined flat, almost 90 degrees to the contact surface of the trigger. During double-action fire we could feel the edges digging into our trigger fingers, distracting us from monitoring necessary feedback from the action and the sights. If we bought this gun, we would smooth those edges.

Although bested by each of the Smith & Wesson guns at 15 yards, the Ruger revolver printed an overall average of about 2 inches with each choice of test ammunition. This was despite vast differences in bullet design and velocity, such as in the case of the Black Hills Match (lead) Wadcutter and Federal’s 129-grain Hydra-Shok rounds. Firing double action only from a rest, we produced at least one group well within the average recorded during single-action shooting with each choice of test ammunition.

The snubbie KSP-821X weighed nearly as much as the Smith & Wesson gun with the 5-inch barrel, and even the hottest .38 Special rounds barely produced muzzle flip. With this in mind we might opt for a .357 Magnum SP101 model.

Our Model 60 revolvers shared the same overall look as larger-framed Smith & Wesson revolvers, but also gave us the distinct impression of being scaled down or miniaturized. The J-frame is the smallest revolver frame in the Smith & Wesson lineup, and the round-butt frame design offered a grip area that was tapered rather than squared. The semi-lug barrel shroud enclosed the ejector rod, making the barrel appear thinner than full-lug models.

A couple of features distinguished this revolver from the 5-inch model reviewed below. Both guns had a fully adjustable rear sight, but the front sight on the 60-15 was black and lined to reduce glare. Also, the Uncle Mike’s grip featured a covered back strap, a palm swell with finger grooves, contour reductions at the bottom for concealment, and contours at the top to reduce interference when loading the chambers.

Our 60-15 offered the best double-action trigger among our three test guns. Although we measured pull weight to be the same as the Ruger, 13 pounds, the action seemed more fluid, in our view. Also, the Smith & Wesson trigger was smooth and the sides were rounded off, making it much more comfortable to operate, we thought. We easily matched many of the groups recorded from our single-action range session with double-action groups. The single-action trigger was a pleasure to shoot, offering only 3.5 pounds of resistance. Two of our three .38 Special test loads produced five-shot groups measuring less than 2 inches across. The Match Wadcutters from Black Hills led the way with consistent 1.1- to 1.3-inch groups. However, the Federal 158-grain .357 Magnum Hydra-Shok sent us looking for a shooting glove. Steel frame or not, recoil was unpleasant when we unleashed 465 foot-pounds from this 24-ounce gun. We tried to fit a Pachmayr Decelerator grip for added comfort, ($32 from Brownells, 800-741-1-800-741-0015), but the grip-screw bushing would not let go of the retaining screw. After watching both screw and bushing turn in place, we decided to use the supplied grip and go back to work. The result was groups ranging from 1.9 inches to 2.3 inches across. At this point we decided to add a second, less potent, selection of magnum ammunition. The Winchester 110-grain JHP .357 Magnum loads provided plenty of bark but less bite, while offering an average of 330 foot-pounds of muzzle energy. We managed to print an average group size of 2.6 inches with this defense load.

We would describe the Ruger KSP-821X as the classic snubby and the 3-inch Smith & Wesson 60-15 as a miniature service revolver. Also, we would agree with S&W’s description of the 60-18 revolver with 5-inch barrel: The “perfect target revolver for the shooter with smaller hands.”

The semi-lug ejector shroud was about 1.5 inches long, explaining why we found little variation in weight between the 3-inch and 5-inch Smith & Wesson revolvers. We should point out that the model 60-18 is listed as being about 5 ounces heavier than our sample.

Our main complaint with the 60-18 was the front sight. Instead of being a black and serrated ramp, it featured an orange plastic insert. In our opinion, the 60-15’s serrated front sight would have been a better choice. The longer sight radius, almost 7 inches, was a plus, but the glare produced by the smooth plastic insert was a negative, often negating the color of the insert.

Compared to the other test guns, the 60-18’s 5-inch-long barrel produced much more velocity, especially when firing the more powerful rounds. When firing the most powerful ammunition in our selection, the Federal Hydra-Shok 158 grain .357 Magnum rounds, the result was an average velocity of 1307 fps and muzzle energy of a whopping 600 foot-pounds. Thankfully, we had been able to remove the two- piece rosewood grip and replace it with Pachmayr Decelerator grips. These grips did an excellent job of providing comfort and control, and if we were to buy this gun, we would certainly buy the Decelerators.

A look at the results from our accuracy test session told us that this gun would indeed be a good competition NRA Bullseye choice. Virtually every group fired single action from a sandbag rest at 15 yards was well under 2.0 inches. With the Federal 129-grain .38 Special +P ammunition, every group measured approximately 1.7 inches across. The Black Hills .38 Special +P averaged 1.6 inches, and the Black Hills 148-grain Match Wadcutters (factory reloads), rang up an average group of only 1.0 inch.

Tempted by this performance, we then tried shooting the model 60-18 from a sandbag rest at a distance of 25 yards. Results at 25 yards showed more variation in group size, but we did manage to land a 1.0-inch group described by four connected shots and one flyer. Returning to our 15-yard targets, the accuracy we achieved firing .357 Magnum ammunition was also impressive. With the Pachmayr grips in place, we were able to center our shots on the bull and print groups that averaged 1.3 and 1.4 inches across for the Winchester and Federal magnum ammunition respectively.

• Ruger KSP-821X .38 Special +P, $515. Buy It. There is no denying the strength and visual appeal of this revolver. We might contour the trigger or apply a fancier grip, but we liked its consistent performance. For flexibility, we might recommend the magnum version, but there isn’t a .38 Special defense load, jacketed or frangible, that it cannot handle with comfort.

• Smith & Wesson Model 60-15 .38 Special/.357 Magnum No. 162430, $630. Buy It. The 3-inch barreled 60-15 was one of the most accurate snubbies we have tested. The barrel is long enough to add velocity, but short enough to conceal and steer quickly from target to target. The double-action trigger was exceptional.

• Smith & Wesson Model 60-18 .38 Special/.357 Magnum No. 162440, $671. Our Pick. This is perhaps the closest any manufacturer has ever come to producing a gun for everyone. For the beginner, it has the size to make shooting pleasant. For the expert, it has the accuracy. For self-defense, it has the power. The Model 60-18 is a jewel of a mass-production gun. 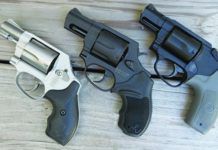 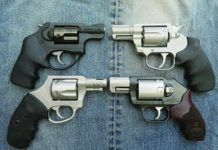