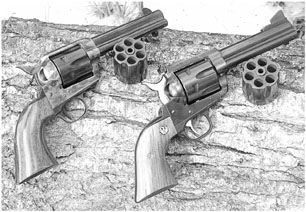 The idea of having one revolver that shoots two different cartridges is old, and even sometimes useful. If you have a fine single-action revolver for the .45 LC, why not install a cylinder that will permit shooting .45 ACP loads? Our experience with such conversions was limited, and it was time to learn something about their value. We acquired two .45 LC revolvers that would work for Cowboy Action competition, and see how well they performed with auxiliary .45 ACP cylinders. We chose one with adjustable sights and one with fixed sights. They were Ruger’s Blackhawk ($530) and the Cimarron Model P ($570). We tested them with two cowboy loads, by Black Hills and Ultramax; and with three .45 ACP loads, Cor-Bon’s hot 185-grain JHP, our handload with cast 200-grain SWCs, and with Hungarian MFS 230-grain ball. Here’s what we found.

[PDFCAP(1)]
Our first impression was that the aluminum grip straps gave the 4.6-inch-barrelled gun a muzzle-heavy feel. Ruger has built many of these guns over the years, and lots of shooters like them. We’ve had some experience with this old Ruger design, but we recently tested the all-steel New Vaquero. We liked the feel of the all-steel gun better. This Blackhawk was nicely blued or blacked all over, with adjustable sights and attractive rosewood grip panels. Not only were the grip straps aluminum, so were the ejector-rod housing and the moving part of the rear sight. This convertible is also available with 5.5-inch barrel, but Ruger does not currently offer the 7.5-inch barrel with an auxiliary cylinder. There are also stainless Blackhawks for $572, but only in 4.6-inch and 7.5-inch barrels, and neither has the auxiliary-cylinder option. All have rosewood grip panels, and twist is 1 in 16 inches.

The frame was square-looking, not particularly attractive to the eye that prefers the lines of a single-action Colt, but most of that look was because of the adjustable sights, which turned out to be extremely important in this test. The worst thing about these Rugers, at least for some shooters, is that the space between the trigger guard and the grip is about a quarter-inch longer than you’d find on a Colt, or clone thereof. While this works for some, in our experience this longer grip does nothing but give the gun a chance to get up a full head of steam (with hot loads) before it rams into the second finger. With our Cor-Bon loads this was quite painful, but those loads were not a problem with the more-Colt-like Cimarron.

Loading the Ruger tested our dexterity. In case you only just arrived, the new Ruger design for its single-action handguns, as we found — and loved — on the New Vaquero, is one of the best in the single-action business. With the new design, each chamber lines up perfectly with the loading gate when you turn the cylinder back against a stop. With our test Blackhawk, you had to fish for the opening, and hold the cylinder steady as you loaded or ejected a round. We have never liked this setup. We suspect, and strongly hope, that all new Ruger single actions will soon have the new loading system. This one sucks big-time, in our view.

Workmanship was very good throughout. Lockup was tight when the gun was new, but by the end of our shooting we could just barely detect some slight movement to the cylinder. The Ruger was a big and useful gun, we thought. It can handle some of the heaviest-recoiling .45 LC rounds by Cor-Bon and Buffalo Bore, if the shooter is up to the task. As an aside, if you want to shoot stout loads regularly, the Ruger Bisley grip will be kinder to your hand. But our test gun would take it. Many shooters like this gun for all-around use including hunting. The short barrel means this relatively handy gun will tend to be there when you want it.

The sights were easily seen, and to our satisfaction the Ruger rear sight had plenty of vertical adjustment. We were easily able to center both our .45 LC loads and the .45 ACP loads, making this two-cylinder setup worthwhile. In fact, though the Ruger [PDFCAP(2)] about 5 inches low at 15 yards with the gun adjusted for .45 LC loads, we were able to raise the sight enough that the ACP bullets hit fully 8 inches too high at 15 yards. The gun handled all our loads easily, but as noted the Cor-Bon .45 ACP rounds got our attention. We didn’t like the Ruger’s trigger pull. It broke at 4.5 pounds, about a pound too much for us, and some of us thought there was a shade of creep. However, it was workable, and with the adjustable sights, the Ruger was indeed a useful handgun, we thought. Accuracy was adequate, though not outstanding. We still don’t like (and have never liked) the loading/unloading system, which Ruger itself has now made obsolete.

[PDFCAP(3)]
We loved this gun in .45 LC. (The gun without extra cylinder has a MSRP of $499.) It looked really great, with perfectly fitted one-piece walnut grips, bull’s-eye ejector, case coloring and beautiful bluing, and “trick” single-screw cylinder pin retention. It even had the very desirable turn-of-the-century trigger guard with rounded bottom. The metal polishing and bluing on barrel, grip straps, cylinder, trigger, and even on the extra serrated pin-retention screw were as good as we’ve seen by anybody. The case coloring didn’t catch our eye all that much. It was muted, much as we’ve seen on early Colts, not the glaringly contrasty and garish stuff seen on many Colt clones. But it was the real thing. We could not mark nor scratch the case-hardened frame and hammer by our normal means. The only slight fly on it was a touch of waviness on the left side near the screw heads.

Both cylinder fronts had the correct and attractive bevels as on early Colts, and the hammer had proper checkering. The hammer also held the firing pin, which was not quite correct, but close. Early Colts had a straight-sided cone shape to the firing pin, while later ones, and our Cimarron, had a concave profile. Fit and finish everywhere were outstanding.The sights were a bit hard to see, but authentic and fully functional. Loading the gun required putting the hammer at partial cock, which freed the cylinder to rotate. Backing it against the stop made for fast and easy loading or unloading. The lineup was good, though not perfect. The cylinder base pin had two notches for the retention screw (not the later, spring-loaded cross pin). It was possible to insert the base pin deep and lock it in place so the hammer could not strike the primer. Unfortunately, it was too easy to do this. We’d replace the existing pin with one having only the correct notch. Two base-pin-retention screws came with the gun, one with a large, serrated head that let the shooter remove the cylinder by hand, and a traditional one that required the use of a screwdriver. We left the big one in. One feature of the Cimarron, absent from the Ruger, was the clearly marked cartridge designation on the outside of the ACP cylinder, so you knew at a glance which one was in the gun.

The markings on this attractive Cimarron were typical Colt except for the two-line marking on top of the barrel, which had both Cimarron’s and Uberti’s names proudly yet discreetly displayed. Lockup with either cylinder was tight, better than Ruger’s, we thought. This gun had all the earmarks of a fine shooter, and that is what it turned out to be. But first we had to adjust the non-adjustable sights, something we had wondered about for a long time. Could it be done easily? This gun put its .45 LC loads correct for elevation, but three inches left at 15 yards. We decided to do something about it. First, we took the cylinder out of the frame and locked the frame and barrel into a vise, with a folded rag to protect the finish. This left the barrel sticking out in the breeze, but solidly held. With a small hammer and an aluminum drift to avoid marring the finish, we gave the sight one well-reasoned and carefully regulated whack to the left, which would bring the grouping to the right. And that did it. To our immense joy, the sight moved and the groups now landed dead center. We strongly advise against the novice trying this. The front sight appears to be installed into a slot. Throughout our subsequent testing the front sight stayed in place, but it could transpire that a treatment like ours would damage the sight if improperly done, or if you’re unlucky. But at least we now know it can be done.

With .45 LC loads the Model P gave us several very small groups, one 0.8 inch for five shots at 15 yards. With .45 ACP, one of the Cor-Bon groups was even smaller, at 0.7 inch. However, the .45 ACP rounds all struck way too low, making the gun essentially useless with that cylinder installed. If you can’t hit your target, there’s no point in shooting. Yet we gave this gun very high marks for its looks, price, workmanship, accuracy, etc., when used with its .45 LC cylinder. The gun looked just grand, had an absolutely outstanding trigger pull, and was one of the finest single-action Colt clones we’ve had the pleasure of shooting, and it didn’t break the bank to buy it. But we had no use whatsoever for the .45 ACP cylinder.

Gun Tests Recommends
• Ruger Blackhawk Convertible, $530. Conditional Buy. For the extra $62 over the bare gun, we’d surely get this one with the ACP cylinder. But we prefer the new loading system and expect Ruger to incorporate it into all its single actions in the near future. But there are plenty of these Ruger “New Model” Blackhawks still available. It’s a safe if clumsy system, and permits the loading of six rounds if desired, though prudent shooters will keep only five in there. (It is possible to slightly withdraw the hammer, pull the trigger fully back, and then release the hammer to fire a round without the gun having been fully cocked.) The adjustable sights makes the use of the .45 ACP cylinder fully realistic, and the Ruger would thus be able to use two commonly available, very effective hunting/self defense rounds in one handgun. Inexpensive .45 ACP ammo makes for low-cost practice with this versatile and rugged Ruger, even if it’s fussy to load and unload. We would prefer an all-steel gun with smaller grips, like the Vaquero, and if an adjustable-sight New Vaquero becomes available with auxiliary cylinder, that’d be the way to go, we figure.

• Cimarron Model P w/ Aux. .45 ACP, $570. Don’t Buy. We found the Cimarron convertible to be useless. The problem, as always, is that the purpose of shooting is hitting, and with the .45 ACP cylinder installed, all shots from the otherwise outstanding and accurate Cimarron landed too low, the degree of displacement from the point of aim depending on the specific load. With the relatively hot Cor-Bon, the situation was the worst, rounds landing over 6 inches low. There is no way to permit the gun to shoot where it looks unless you destroy its usefulness with .45 LC. We felt that would be a tragedy, in this case, because of the Cimarron’s outstanding historic look and total viability with the original .45 LC loading. As a cowboy gun, it’s great. As a convertible, we felt it didn’t measure up, and it’s the convertible package we’re rating, not the gun with its .45 LC cylinder. The Cimarron Model P by itself rated as Our Pick, and at $499 we’d buy it in a heartbeat. 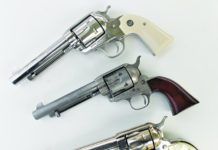 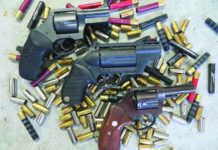 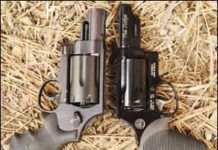 Judging the Governor: We Pit Taurus and S&W Wheelguns